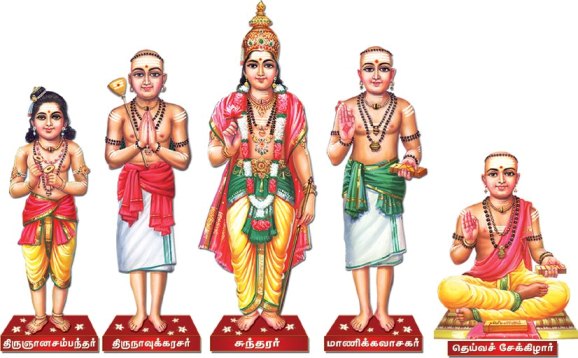 Information about Thirugnana Sambandar comes mainly from the Periya Puranam, the eleventh-century Tamil book on the Nayanars that forms the last volume of the Tirumurai. The first three volumes of the Tirumurai contain three hundred and eighty-four poems of Sambandar, all that survive out of a reputed more than 10,000 hymns.
According to the texts, Sambandar was born to Sivapada Hrudiyar and his wife Bhagavathiar who lived in Sirkazhi in Tamilnadu. When Sambandar was three years old his parents took him to the Shiva temple where Shiva and his consort Parvati appeared before the child.
His father saw drops of milk on the child's mouth and asked who had fed him, whereupon the child pointed to the sky and responded with the song Todudaya Seviyan [at the age of three], the first verse of the Tevaram.
At his investiture with the sacred thread, at the age of seven, he is said to have expounded the Vedas with great clarity. Sambandar attained liberation (mukti) at the age of sixteen soon after his marriage.

Click on the Pictures for hearing the [Sambandar Thevaram] hymns: 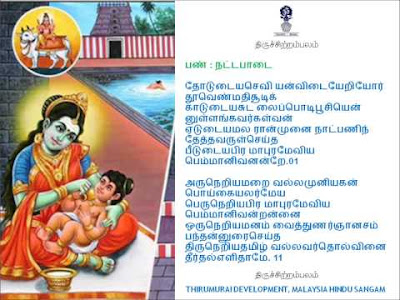 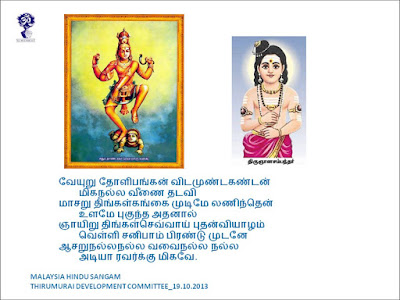 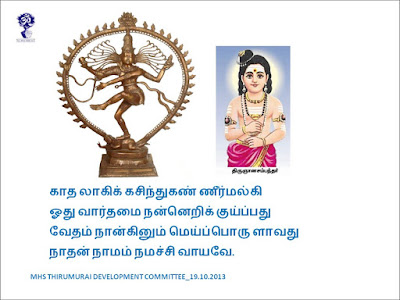 "The God with a ring in His ears appear on the Holy Bull [Creation], He has the moon on his head [Protection], He wears the ash of the burnt bodies in the cremation ground [Destruction], He-the thief- has stolen my heart [Hiding], He blessed the Brahma, who is on the Lotus, when he prayed the God in the past [Blessing], He is that Peruman of the great Piramaapuram".