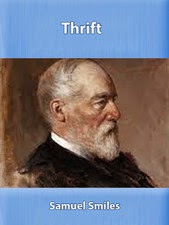 The book, “Thrift” by Samuel Smiles, is intended as a sequel to "Self-Help," and "Character." It might, indeed, have appeared as an introduction to these volumes; for Thrift is the basis of Self-Help, and the foundation of much in Character.

Some of the finest qualities of human nature are intimately related to the right use of money; such as generosity, honesty, justice, and self-denial.

We must know how to earn, how to spend, and how to save. Independence can only be established by the exercise of forethought, prudence, frugality, and self-denial. To be just as well as generous, men must deny themselves. The essence of generosity is self-sacrifice. Practise the virtue of Thrift

"The secret of all success is to know how to deny yourself.

Competence and comfort lie within the reach of most people. But it is only by the exercise of labour, energy, honesty, and thrift, that they can advance their own position or that of their class.

Society suffers far more from waste of money than from want of money. It is easier to make money than to know how to spend it prudently. It is not what a man gets that constitutes his wealth, but his manner of spending and economizing.

Thrift of Time is equal to thrift of money. Franklin said, "Time is gold." If one wishes to earn money, it may be done by the proper use of time. But time may also be spent in doing many good and noble actions. It may be spent in learning, in study, in art, in science, in literature.

Nobody denies that thrift may be practised. Nor is thrift a painful virtue. On the contrary, it enables us to avoid much contempt and many indignities. It requires us to deny ourselves, but not to abstain from any proper enjoyment. It provides many honest pleasures, of which thriftlessness and extravagance deprive us.

Thrift does not require superior courage, nor superior intellect, nor any superhuman virtue. It merely requires common sense, and the power of resisting selfish enjoyments.

In fact, thrift is merely common sense in every-day working action. It needs no fervent resolution, but only a little patient self-denial. The more the habit of thrift is practised, the easier it becomes; and the sooner it compensates the self-denier for all sacrifices.

Comparatively few people can be rich; but most have it in their power to acquire, by industry and economy, sufficient to meet their personal wants. They may even become the possessors of savings sufficient to secure them against penury and poverty in old age.

It is not the want of opportunity but the want of will, that stands in the way of economy. Men may labour unceasingly with hand or head; but they cannot abstain from spending too freely, and living too highly. They often spend all that they earn.

Money represents a multitude of objects without value, or without real utility; but it also represents something much more precious,—and that is independence. In this light it is of great moral importance.

As men become wise and thoughtful, they generally become provident and frugal.
Thinking people believe that life is now too fast, and that we are living at high-pressure. In short, we live extravagantly. We live beyond our means.

Many persons are diligent enough in making money, but do not know how to economize it,—or how to spend it. They have sufficient skill and industry to do the one, but they want the necessary wisdom to do the other.

The habit of saving dispenses with everything which is not essential, and avoids all methods of living that are wasteful and extravagant. A purchase made at the lowest price will be dear, if it be a superfluity. Little expenses lead to great.

"Not to have a mania for buying, is to possess a revenue." Many are carried away by the habit of bargain-buying. "Here is something wonderfully cheap: let us buy it." "Have you any use for it?" "No, not at present; but it is sure to come in useful, some time."

Men must prepare in youth and in middle age the means of enjoying old age pleasantly and happily. It is, in fact, in youth that economy should be practised, and in old age that men should dispense liberally, provided they do not exceed their income.

Self-respect is the root of most of the virtues—of cleanliness, chastity, reverence, honesty, sobriety. To think meanly of one's self is to sink; sometimes to descend a precipice at the bottom of which is infamy.

We can each elevate ourselves; cherish pure thoughts; perform good actions; live soberly and frugally. We can provide against the evil day. We can read good books, listen to wise teachers, and place ourselves under the divinest influences on earth. We can live for the highest purposes and with the highest aims in view.
The true prosperity of the nation consisted not so much in the fact that the nation was growing in wealth—though wealth was a necessary attribute of prosperity—but that it was growing in virtue; and that there was a more equable distribution of comfort, contentment, and the things of this lower world."

Thrift means economy for the purpose of securing independence. Thrift requires that money should be used and not abused—that it should be honestly earned and economically employed for the glorious privilege Of being Independent."


Samuel Smiles [1812-1904] was a Scottish author, best known for his didactic work Self-Help which elevated him to celebrity status almost overnight.

I studied his essay on "Home Power" [Chapter 2 of Character] in an Intermediate Prose Anthology and was greatly impressed.  I share with you here, excerpts from

HOME is the first and most important school of character.
"Home makes the man." For the home-training includes not only manners and mind, but character. It is mainly in the home that the heart is opened, the habits are formed, the intellect is awakened, and character moulded for good or for evil.
The child learns by simple imitation, without effort, almost through the pores of the skin. "A fig tree looking on a fig tree becomes fruitful," says the Arabian proverb. And so it is with children; their first great instructor is example.
However apparently trivial the influences which contribute to form the character of the child, they endure through life. The child's character is the nucleus of the man's; all after-education is but superposition; the form of the crystal remains the same.
Says William Wordsworth, "The child is father of the man;" or, as Milton puts it, "The childhood shows the man, as morning shows the day." Those impulses to conduct which last the longest and are rooted the deepest, always have their origin near our birth. It is then that the germs of virtues or vices, of feelings or sentiments, are first implanted which determine the character for life.
It is in childhood that the mind is most open to impressions, and ready to be kindled by the first spark that falls into it. Ideas are then caught quickly and live lastingly. Thus Scott is said to have received, his first bent towards ballad literature from his mother's and grandmother's recitations in his hearing long before he himself had learned to read. Childhood is like a mirror, which reflects in after-life the images first presented to it.
Homes, which are the nurseries of children who grow up into men and women, will be good or bad according to the power that governs them.
Where the spirit of love and duty pervades the home—where head and heart bear rule wisely there—where the daily life is honest and virtuous—where the government is sensible, kind, and loving, then may we expect from such a home an issue of healthy, useful, and happy beings, capable, as they gain the requisite strength, of following the footsteps of their parents, of walking uprightly, governing themselves wisely, and contributing to the welfare of those about them.
One good mother, said George Herbert, is worth a hundred schoolmasters. In the home she is "loadstone to all hearts, and loadstar to all eyes." Imitation of her is constant—imitation, which Bacon likens to "a globe of precepts." But example is far more than precept. It is instruction in action. It is teaching without words, often exemplifying more than tongue can teach.
It is because the mother, far more than the father, influences the action and conduct of the child, that her good example is of so much greater importance in the home.
The poorest dwelling, presided over by a virtuous, thrifty, cheerful, and cleanly woman, may thus be the abode of comfort, virtue, and happiness; it may be the scene of every ennobling relation in family life; it may be endeared to a man by many delightful associations; furnishing a sanctuary for the heart, a refuge from the storms of life, a sweet resting-place after labour, a consolation in misfortune, a pride in prosperity, and a joy at all times.
The good home is thus the best of schools, not only in youth but in age. There young and old best learn cheerfulness, patience, self-control, and the spirit of service and of duty.

THIRUMOOLAR THIRUMANDIRAM: ONE HUMANITY ONE GOD!

2014-02  Thirumoolar Thirumandiram: One Humanity, One God!

In this second posting on Thirumoolar, we shall see two of his famous aphorisms, namely,

The ignorant prate* that Love and Siva are two,


But none do know that Love alone is Siva


When men but know that Love and Siva are the same,

One is the Race; One, indeed, is God
Thus intensely hold, No more will death be;


None Other is Refuge, With confidence you can seek;


Think of Him and be redeemed, In your thoughts, holding Him steadfast.   [verse 2104]

THIRUMOOLAR THIRUMANDIRAM: 4 THINGS THAT ALL CAN DO

2014-01 Thirumoolar Thirumandiram: 4 Things that all can do All people want to be happy, healthy, peaceful, free from sorrow and free from all strains.
Saint Thirumoolar says that all can achieve these by doing just four simple things:
1. always offer a green [bilva] leaf to God with prayerful attitude
2. always offer a mouthful of grass to a cow with compassion
3. always offer a handful of food to the hungry, when eating and
4. always offer sweet and kind words to all in need of them.

Posted by Raghunathan Srinivasan at 16:08 No comments: