Malabar Farm continues the story begun in Pleasant Valley of the author's efforts of restoring a worn out farm to productivity, covering the years from 1944 to 1947 and going deeper into his philosophy of agriculture and the all-important matter of the soil.

In Pleasant Valley, Bromfield rhapsodized to some degree about farming. In Malabar Farm, he gets down to describing in detail the hard work of actually farming the land in an intelligent manner.

Bromfield wades into the intricacies of agricultural policy, farm economics, as well as the extended passages on the care of the soil.

If someone is contemplating doing what Bromfield did, the first book provides motivation and vision, and this book a healthy dose of realism. Both are important, even if the latter is tougher reading.

History: Nestled in the hills of Pleasant Valley, Malabar Farm was built in 1939 by Louis Bromfield and was his home until his death in 1956. The Bromfield family moved to Pleasant Valley in 1939 and lived in the “Fleming house” until their “Big House” was built. Bromfield chose architect Louis Lamoreux of Mansfield to help him design and construct a Greek revival style home. The original Herring house was used as the center of the construction.
The 32-room western reserve, where Bromfield wrote many of his books, attracted film stars, artists, politicians, writers, and conservationists annually. Bromfield developed a technique known as conservation farming. This was based on grass farming, which produced large quantities of forage and pasture. Malabar Farm became a national model for sustainable agriculture.
In addition to this, Bromfield experimented with composting using manure from livestock on the farm. In 1958, Bromfield’s children sold the farm to a conservation foundation—Friends of the Land. In August 1972, the deed of Malabar Farm was accepted by the state of Ohio after the Louis Bromfield Malabar Farm Foundation—which had been operating the farm—faced foreclosure. In 1976, the farm became a state park.


The threat of war in Europe and Louis Bromfield's own desire to return to the land of his youth prompted him to purchase three exhausted farms here in Pleasant Valley in 1939. He named the estate Malabar Farm after the Malabar Coast of India, the setting of his 1937 book The Rains Came.

He also continued to write books, turning to non-fiction to share his experiences. Among these are Malabar Farm (1948) and Out of the Earth (1950). Bromfield died in 1956 and in the following years Malabar passed out of family ownership. Malabar Farm became a state park in 1976, demonstrating techniques that Bromfield put into practice

Kirkus review states that "Malabar Farm" is a sequel to "Pleasant Valley", in the further record of Malabar, where the experiment in soil reclamation is bearing fruit. It is not so consistently entertaining reading as the earlier book, though there are chapters with the same contagious feel of the countryside, his fresh enthusiasm for the progressive ideas he is putting into practice, the animals of the farm and house, the neighbors, the guests.

Much of the text is intended for the practical agriculturist, and is pretty scientific for the layman. A challenge to our national waste and ignorance as to our real wealth- a warning that we look well before we give too lavishly- a conclusive argument in favor of modern methods increasing production, with plenty for all and farming as a profitable way of life, as the goal.

LOUIS BROMFIELD: PLEASANT VALLEY2: THE WORLD WITHIN THE EARTH

A good farmer must be many things — a horticulturist, a mechanic, a botanist, an ecologist, a veterinary, a biologist and any number of other things — but knowledge alone is not enough. There must be too that feel of all with which nature concerns herself. That is what Confucius meant in the proverb "The best fertilizer on any farm is the footprints of the owner".

The good, the “live” farmer is the man who turns now and then to look back at the furrows his plow turns over, to see that the soil crumbles behind him as rich, good soil should crumble. He is the man who sees the humus in his good earth and counts the earthworms, and watches his crops as they grow to see whether they are strong or sickly and what it is that is needed to make his pastures dark and green, his corn tall and strong.

It lies with him whether his world shall be rich and prosperous or decaying and poor and wretched. He is the man who knows how deeply Nature can reward the conscientious, intelligent worker and how bitterly she can punish the stupid shiftless ones to the very marrow of their bones.

Agriculture is in many ways the most satisfactory and inexhaustible of sciences. It touches or includes countless other fields of knowledge and research and with each discovery whole new fields to be explored are opened up.

It is like the Pleasant Valley country where beyond each wooded hill there is a new small world, filled with adventure, mysterious and complete within itself. Now and then a professor, a bureau man or a scientist leads the way into the wrong country as did the man who believed that chemical fertilizer is the panacea for the ills of the soil.

It took many years and millions of acres of soil made arid, bereft of humus and bacteria and earthworms for the farmer to discover that chemical fertilizer was not the whole answer but only a small, though vital, part.

In the meanwhile many farmers and a good many scientists, neglected the actual process of what went on in the soil, forgetting that the natural process of health and growth and reproduction is an immensely complicated affair, whether in man or in beast or in plant and that there are no short-cuts which are not in the end illusory and costly.

With all the research we have made there still remain many mysteries, not beyond explanation but which have not yet been explained or understood. In this borderland the “live” farmer finds his place — the man who sees and feels what is going on in the soil beneath his feet and on the earth around him, the man whose footsteps are the best fertilizer of his farm. 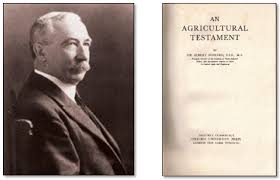 The best book I know on soil and the processes which take part in it is An Agricultural Testament by Sir Albert Howard [OUP]. It is the record of a lifetime spent in working with soil, its preservation and restoration, and the author approaches the whole subject with a kind of reverence and mysticism without which I believe the efforts of any agricultural scientist may, in the end, be of little value.

Possibly no one knows more of soil and the principles that effect growth and fertility and abundance than Sir Albert, but his attitude is one of humility toward the still greater mysteries which he has not yet explored.

A heap of well-cured barnyard manure is not merely a composite of certain elements held together in certain chemical formulas. It is not merely the residue of calcium, phosphorus, potassium, nitrogen and trace minerals which the animals have eaten, rejected and passed out of the intestines. There are other mysterious elements — many  kinds of bacteria, hormones, vitamins, glandular secretions — of which we know all too little. 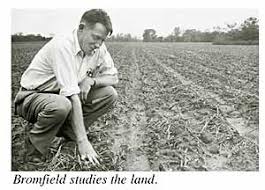 You could make a chemical analysis of that heap of manure and reproduce it synthetically, but in the exact chemical formula the result would not have the same stimulating and, above all else, the same healthy effect upon plant growth and fertility as the heap of manure itself. Most important of all, the synthetically produced fertilizer would contain no organic material, no potential humus without which all plant life in the end turns sickly or deficient.

Experimentation is the very essence of the '‘live” farmer. It is the enemy of stagnation and of evil practices, of the whole school of thought which believes that “if it was good enough for my grandfather it is good enough for me.” 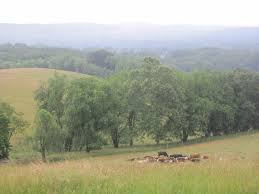 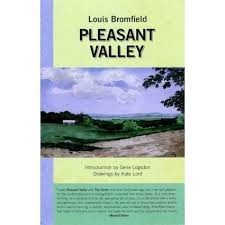 For the full text of An Agricultural Testament by Sir Albert Howard:  [Click Here]

"Pleasant Valley" is a personal testament written out  of a lifetime by a man who believed that agriculture is the keystone of our economic structure and that the wealth, welfare and prosperity of the nation are based upon the soil.

It is frankly, a romantic book, written in the profound belief that farming is the most honourable of professions and unquestionably a romantic and inspiring one.

In Chapter 3 of the Pleasant Valley, Louis Bromfield talks about the legendary Johnny Appleseed:


It is said that Johnny's real name was John Chapman and that he was born in New England. It is pretty well accepted that he was a Swedenborgian by faith.

The truth is of course that Johnny Appleseed had attained that legendary status where facts are no more of importance. He had become a kind of frontier saint about whom had collected volumes of folklore and legend.

Like St. Francis, he had a habit of talking aloud to birds and animals as he tramped bare-footed through the woods.

He never accepted the hospitality of a bed but chose instead to sleep in the great haymows above the fat cattle and horses. The Indians regarded him with awe and veneration. He lived at peace among them, preaching brotherhood and goodwill.

Johnny went about planting apple trees in the wild frontier country. Some say that he scattered the seeds as he went along the edges of marshes or natural clearings in the thick, almost tropical forests. Others say that he distributed the seeds among settlers themselves to plant.

When in early spring, there drifts towards you the perfume of a wild apple tree, the spirit of Johnny rides the breeze.

When in winter, the snow beneath a wild apple tree is crisscrossed with the delicate prints of raccoon or muskrat or rabbit, you know that they have been there gathering apples from the trees that would never have existed but for crazy Johnny and his saucepan and poke of seeds.

Johnny is alive wherever the feathery fennel or the flowering day lilies cover a bank. He is there in the trees and the caves, the springs and the streams of our Ohio country, alive and still in a legend, which grows and grows! 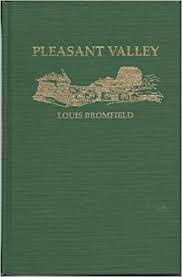 LOUIS BROMFIELD: HIS LIFE AND WORKS

Louis Bromfield [1896-1956]:  Novelist, short story writer, political writer, playwright, scriptwriter, essayist, journalist, soldier, innovative farmer, nature writer and conservationist: Louis Bromfield was all of these, and more. Awarded the Pulitzer Prize for fiction in 1927 (Early Autumn), the O Henry Memorial Short Story Award in 1927 (The Scarlet) and 1928 (The Skeleton at the Feast), and membership in America's National Institute of Arts and Letters (1928), he wrote prolifically. He received the Audubon Medal for leadership in conservation farming in 1952.

Initially educated in agriculture at Cornell University, Bromfield transferred to Columbia University in 1916 in order to study journalism. In 1917, he entered the war with the American Field Service in France and was subsequently decorated for his war contribution. Following the war, he returned to New York City and began working as a journalist.

His first novel, The Green Bay Tree appeared in 1924 and is the opening of a tetralogy which made his literary reputation. In 1925, he moved to France and continued work on his tetralogy. The four works culminated in A Good Woman in 1927. The third in the series, Early Autumn won him the Pulitizer Prize in 1926.

He returned to America in 1938 when war seemed imminent and acquired a large farm near his Ohio birthplace. He became a strong adherent of organic farming and conservation.