"What are you going to post, coming Sunday and the next?" asked my wife. "31st March is Dr Kent's birthday and 10th April is Dr Hahnemann's. Hence, I am going to write about what I have learnt from the lives of  Dr James Tyler Kent and Dr Samuel Hahnemann," said I.

Just as the life and teachings of Jesus Christ needed the Apostles to explain and expound, the Organon and the Materia Medica of Dr Hahnemann needed great disciples like Boenninghausen, Hering, Lippe, Dunham, Kent, Roberts, and others. Among these great men, Kent stands supreme.


James Tyler Kent was born in Woodhull, New York, on 31 March 1849 [six years after the death of Hahnemann] and lived for 67 years. After completing two undergraduate degrees by the age of 21, Kent undertook two postgraduate courses at the Eclectic Medical Institute of Cincinnati, Ohio. At 26 years of age, he set up practice as an eclectic physician in St Louis, Missouri and soon became a distinguished member of the Eclectic National Medical Association.

In 1878, Kent’s wife, Lucy, became critically ill. By then, Dr Kent was a highly qualified and experienced physician and Professor of Anatomy at the American College of Saint Louis. He was helplessly watching the health of his adored wife progressively deteriorate. Despite the medication of his most competent colleagues, asthenia (lack of bodily strength), persistent insomnia and anemia kept Mrs. Kent, bedridden for months on end. Her condition became more and more perilous until, reluctantly, Dr. Kent acceded to his wife's request to consult Dr. Phelan, a highly recommended homeopath.

Dr Phelan examined the patient and then proceeded to question her about the manifestation of her malady. He also made penetrating inquiries as to her mental and emotional state, her reactions to cold, to heat, as well as the impact of climatic and seasonal conditions. After careful consideration of all the information, Dr Phelan put a few little globules into a glass of water, gave the patient one teaspoonful and instructed that dose be repeated every two hours till she fell asleep.

Thereupon Dr Kent decided that the homeopath must be a simpleton, firstly for asking such absurd questions that seemed to him to be entirely unrelated to his wife's illness, and secondly for suggesting that his little globules would succeed in easing her to sleep where strong drugs had failed. However, not wishing to upset his wife, but without conviction, he administered the next dose.

Then Dr Kent went to his room to prepare for his lectures and was totally immersed in it. When he remembered and re-entered his wife's room for the third dose, he was astounded to see her sleeping peacefully and profoundly. Little by little, the patient responded to the daily ministrations of Dr Phelan and within weeks, had completely recovered. Dr Kent was so impressed by what had been accomplished by homeopathic treatment, that he zealously took up the study of homeopathy and thereafter devoted his life to that science.

Under Phelan's guidance Kent studied Dr Hahnemann's Organon, and Materia Medica Pura for nights on end. He left the membership of National Society of Eclectic Medicine and completely changed over to Homoeopathy. He considered Homoeopathy to be the only therapy that was guided by laws and principles and the only one to address the fundamental cause of illness.

Repertory of the Homoeopathic Materia Medica (1897) Forms the basis of many of the more recent repertories.

Lectures on Homoeopathic Materia Medica (1904). Drawn from his lectures on remedies from Hering’s Guiding

Symptoms of our Materia Medica.

High potency prescription (200C and above for chronic cases)

DR KENT ON "THE ORGANON OF MEDICINE" BY DR HAHNEMANN 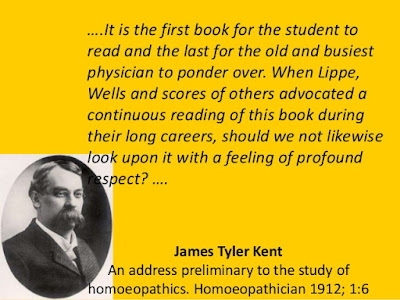 *Ironically, the same doubts and reservations Dr Kent first entertained, still arise today in the minds of many. What is homeopathy? How does it work? Is it really a science? Can those little sugar pills be effective or is improvement merely a placebo effect?