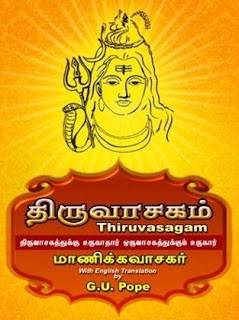 A peek into Thiruvachakam, a collection of spiritual verses on devotion to Shiva from the saint Manikkavachakar in Tamil language.

Do not sip honey from a small flower of the size of a millet seed.


Whenever we think of Him, behold or speak of Him,


This  beautiful verse directs the humming bee wandering in small pleasures, jiva [individual soul] to yearn for Shiva, the Supreme soul and abode of boundless joy.

It is from Thiruvachakam, a collection of 656 deeply spiritual verses that poured out from the heart of saint poet Manikkavachakar in Tamil language.

***                         ***                             ***
In the seventh to ninth centuries AD there appeared in South India an upsurge of devotional fervour that completely transformed the religious inclinations and practices of the region. The movement’s leaders were the various saints who toured the countryside singing songs in praise of their personal God. The language of these songs was deliberately simple, for they were intended to be sung by ordinary devotees, either alone or in groups.

This was the first of the great bhakti movements that were to invigorate the Hindu tradition throughout India in the succeeding centuries. It was so successful in transforming the hearts and minds of the South Indian population, one commentator has gone so far as to say that these poet-saints ‘sang Buddhism and Jainism out of South India’. 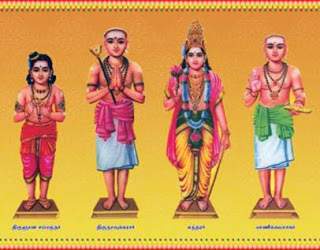 The Saiva revival of this era owed much to four poet-saints who are often collectively referred to as ‘the Four’ (Naalvar). Appar, the first to emerge, flourished in the seventh century. Thirujnanasambandhar, the next to appear, was a younger contemporary of his. They were followed by Sundaramurthi in the 8th century and Manikkavachagar, whom most people believe lived in the 9th century.

The spontaneous songs of these early Saiva saints were eventually collected and recorded in a series of books called the Tirumurais. The first seven (there are twelve in all) are devoted exclusively to the songs of Tirujnanasambandhar, Appar, and Sundaramurti, which are known as the Tevarams, while the eighth contains Manikkavachagar’s Thiruvachakam and Thirukkovaiyar. These twelve Thirumurais, along with the later Meykanda Sastras, became the canonical works of the southern Saiva branch of Hinduism. This system of beliefs and practices is still the most prevalent form of religion in Tamil Nadu. 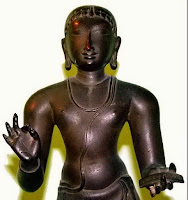 Manikkavachagar’s fame and reputation as being one of the foremost Tamil saints and poets rest almost exclusively on the eminence of the Thiruvachakam.


The Thiruvachakam is a very personal document, for it reveals far more about its author and his varying states of mind than the Thevarams do. It is also more philosophical.

Thiruvachakam is, and has been for more than a thousand years, one of the most well known and best-loved works of Tamil devotional literature. It is so highly regarded that extracts from it are chanted every day in many South Indian homes and temples.

The meaning of its sweet verses is beyond intellectual knowledge. Thiruvachakam is a sea of divine honey expressing the God-experience that puts an end to the birth-misery of getting caught in the womb.

Sivaprakasa Swamigal summed up the feelings of those who had been stirred by this work when he wrote: If Thiruvachakam is recited but once, there are none whatsoever whose hearts will not melt and flow, whose eyes will not fill up with tears, who will not tremble and quiver, the hair of their body standing on end, and who will not become His devotees!

Once Vaadavurar came to the Thiruperundurai temple, had darshan of the Lord in it, and while going round the temple, saw a Siddha Purusha [Lord Shiva in disguise]. He was thrilled at the sight, fell down at the feet of the Guru like an uprooted tree and prayed that he, a humble being, should be accepted as a disciple.

Having come down solely to bestow grace on him, Iswara, by his look, immediately gave him jnana upadesa [initiation into true knowledge]. That upadesa took deep roots in his heart, and gave him indescribable happiness. Vadavurar started singing many devotional songs in praise of the Guru, which were like gems. Iswara was pleased, and addressed him as ‘Manikkavachakar’ [meaning ‘one whose speech is gems’].


Thiruvaachakam opens with SHIVA PURANAM -- an Invocation to Lord Shiva:


For the full text of Shivapuranam with meaning and chanting: [Click Here]
http://www.tamilvu.org/library/l4180/html/l4180ind.htm