In James Allen's book, "Men and Systems", the second chapter "Work, Wages and Well-Being" gives an insight into the seven-fold wages of work.

Wheresoever there is ability, there also are scope and opportunity. Where there is energy, there also are legitimate channels for its exercise. Of all abilities, the capacity for work is the most useful and necessary, and its possession is a glorious power.

Work is of two kinds - it is either loving labour or enforced slavery. The man whose sole object is to get through his work in order to draw his pay, who has no love for, and no interest in his work, beyond what it represents in cash, is a slave and not a true worker. His entire interest is in getting instead of in doing.

On the contrary, the man whose heart is centered in his work, who aims at the perfect performance of his duty, is a true worker whose usefulness and influence are cumulative and progressive, carrying him on from success to greater and greater success.

The wages of work are sure. In the universal economy no man is cheated; he cannot be defrauded of his just earnings, for every effort receives its proportionate result; first work as the cause, and then wages as the effect. But while wages is the result, it is not the end; it is only a means to a still greater and more far-reaching result and end, namely, the progress and increased happiness both of the individual and the race - in a word, to well-being.


The receiving of so much money for work done does not represent wages in its entirety; it is, indeed, only a small portion of the actual wages of true work.

First, he receives the full amount of money of which his work is the equivalent; but in addition to this, his usefulness to the world increases and continues to increase in an ever ascending degree; and this greater usefulness is one of the pure delights of labour, for one of the chief rewards of use is to be of greater use.

This accumulating usefulness leads to the wages of excellence, a growing perfection in the work undertaken.

A point of excellence is at last reached which merges into power, knowledge, mastery. The man who is devoted to his work becomes at last a master in that work, whatever it may be.

Associated with power is independence. The true worker takes his place among his fellows as a useful citizen. The fearless flash of honesty is in his eyes, the ring of worth is in his voice, and the steadfastness of self-reliance is in his gait.

Honour is one of the higher forms of wages, and it comes unerringly and unsought to all who are energetic and faithful in the work of their life. It may be, and often is, late in coming, but come it must and does, and always at its own proper time; for while money is the first and smallest item in wages, honour is one of the last and greatest.

From the perfection of happiness proceeds well-being - a quiet conscience, a satisfied heart, a tranquil mind, and the consciousness of having increased the happiness and aided in the progress of mankind through the full and faithful exercise of one‘s abilities.

First work, and then wages; but well-being only follows when the work is of the true kind, when it is loved for its own sake, and when the money received for such work is utilized for further work and better achievement instead of being squandered in folly and self-indulgence.

It is demanded by the law of things that every man shall receive the equivalent of what he gives. If he gives idleness, he receives inactivity- death; if gives stinted and unwilling service, he receives stinted and hardly secured pay; if he gives loving and generous labor, he recipes generous recompense in a life replete with blessedness.


James Allen: Men and Systems Text [Click on Picture below] 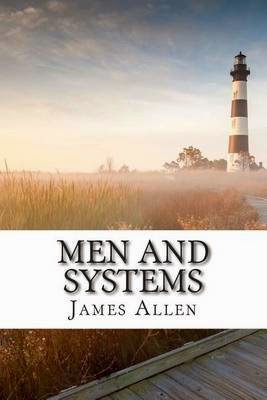 JAMES ALLEN: IF MEN ONLY UNDERSTOOD - "LIVE IN LOVE"


If men only understood 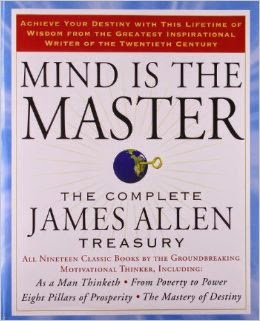 TAGORE: THE POST OFFICE - HOW TO BE HAPPY SELLING CURDS 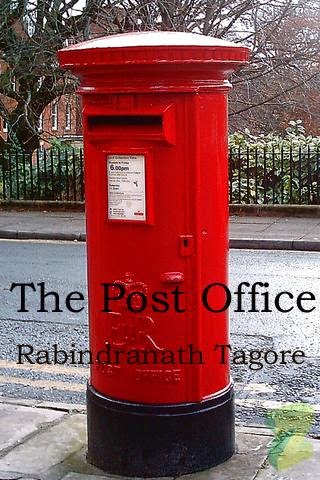 Rabindranath Tagore, an Indian writer of all forms of literature (as well as a painter and composer), predominantly wrote in Bengali, though several of his poems and plays have been translated into English. Originally written in Bengali in 1912, Dak Ghar was translated into English as The Post Office and performed in 1913 by the Abbey Theatre Company in Dublin and London. The play was then published in 1914. To this day, The Post Office is the most renowned and beloved of Tagore's dramatic works, and it is still regularly produced in the United States and abroad.

The story is about Amal, an eight year old boy who is terminally ill and confined to his bed by the family physician. His only contact with the outside world is through his window. From there he watches village life, engages passers-by in eager conversation from the vantage of his open window.  Only by dying is the boy finally set free. The play is a poignant tribute to the human spirit that gathers hope, even where there seems to be none. It symbolizes the whole human experience of the uncorrupted soul with its yearning and flights of imagination being trapped in the limitations of the body. 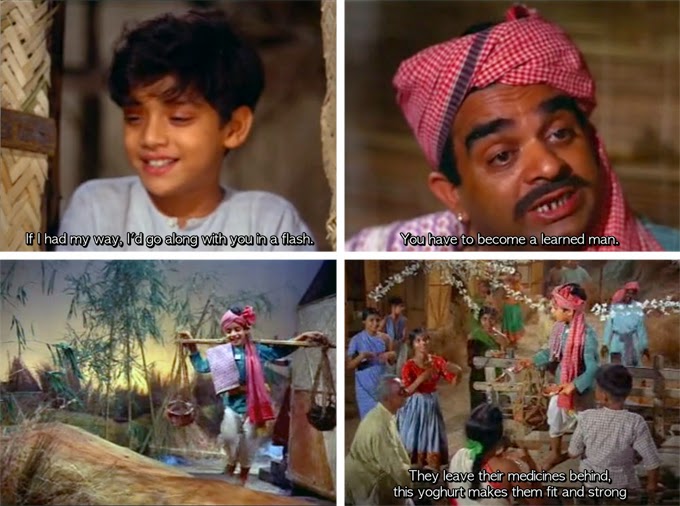 Amal. Curdseller, I say, Curdseller.
Dairyman. Why do you call me? Will you buy some curds?
Amal. How can I buy? I have no money.
Dairyman. What a boy! Why call out then? Ugh! What a waste of time.
Amal. I would go with you if I could.
Dairyman. With me?
Amal. Yes, I seem to feel homesick when I hear you call from far down the road.
Dairyman [Lowering his yoke-pole] Whatever are you doing here, my child?

Amal. The doctor says I'm not to be out, so I sit here all day long.
Dairyman. My poor child, whatever has happened to you?
Amal. I can't tell. You see I am not learned, so I don't know what's the matter with me. Say, Dairyman, where do you come from?
Dairyman. From our village.
Amal. Your village? Is it very far?
Dairyman. Our village lies on the river Shamli at the foot of the Panch-mura hills.

Amal. Panch-mura hills! Shamli river! I wonder. I may have seen your village. I can't think when though!
Dairyman. Have you seen it? Been to the foot of those hills?
Amal. Never. But I seem to remember having seen it. Your village is under some very old big trees, just by the side of the red road--isn't that so?


Dairyman. That's right, child.
Amal. And on the slope of the hill cattle grazing.
Dairyman. How wonderful! Aren't there cattle grazing in our village! Indeed, there are!
Amal. And your women with red sarees fill their pitchers from the river and carry them on their heads.
Dairyman. Good, that's right. Women from our dairy village do come and draw their water from the river; but then it isn't everyone who has a red saree to put on. But, my dear child, surely you must have been there for a walk some time.
Amal. Really, Dairyman, never been there at all. But the first day doctor lets me go out, you are going to take me to your village.
Dairyman. I will, my child, with pleasure.

Amal. And you'll teach me to cry curds and shoulder the yoke like you and walk the long, long road?
Dairyman. Dear, dear, did you ever? Why should you sell curds? No, you will read big books and be learned.
Amal. No, I never want to be learned--I'll be like you and take my curds from the village by the red road near the old banyan tree, and I will hawk it from cottage to cottage. Oh, how do you cry--"Curd, curd, good nice curd!" Teach me the tune, will you?
Dairyman. Dear, dear, teach you the tune; what an idea!

Amal. Please do. I love to hear it. I can't tell you how queer I feel when I hear you cry out from the bend of that road, through the line of those trees! Do you know I feel like that when I hear the shrill cry of kites from almost the end of the sky?
Dairyman. Dear child, will you have some curds? Yes, do.
Amal. But I have no money.
Dairyman. No, no, no, don't talk of money! You'll make me so happy if you have a little curds from me.
Amal. Say, have I kept you too long?
Dairyman. Not a bit; it has been no loss to me at all; you have taught me how to be happy selling curds. [Exit]

[If you like this anecdote, you may read THE POST OFFICE in full; it is studded with many such gems -- like the episode of Sudha, the flower girl.] 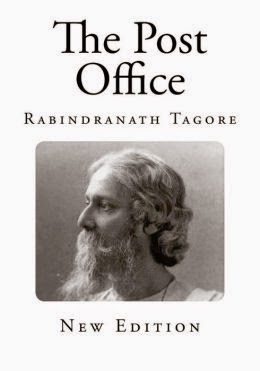 Rabindranath Tagore (1861– 1941): Author of Gitanjali and its "profoundly sensitive, fresh and beautiful verse", he became the first non-European to win the Nobel Prize in Literature in 1913. In translation his poetry was viewed as spiritual and mercurial; his seemingly mesmeric personality, flowing hair, and other-worldly dress earned him a prophet-like reputation in the West. "His prose was elegant and poetry magical." Gitanjali [1913], Crescent Moon [1913], Post Office [1914], King of the Dark Chamber [1914] are instances in point.

The Crescent Moon is a collection of 40 child-poems by Rabindranath Tagore. The poems are deceptively simple but are full of profound thoughts for contemplation. We shall study here, just two of these gems: Playthings and the Child-Angel:

Child, how happy you are sitting in the dust, playing with a broken twig all the morning.
I smile at your play with that little bit of a broken twig.

I am busy with my accounts, adding up figures by the hour.
Perhaps you glance at me and think, "What a stupid game to spoil your morning with!"

Child, I have forgotten the art of being absorbed in sticks and mud-pies.
I seek out costly playthings, and gather lumps of gold and silver.

With whatever you find you create your glad games, I spend both my time and my strength over things I never can obtain.

In my frail canoe I struggle to cross the sea of desire, and forget that I too am playing a game.

They clamour and fight, they doubt and despair, they know no end to their wranglings.
Let your life come amongst them like a flame of light, my child, unflickering and pure, and delight them into silence.

They are cruel in their greed and their envy, their words are like hidden knives thirsting for blood.

Go and stand amidst their scowling hearts, my child, and let your gentle eyes fall upon them like the forgiving peace of the evening over the strife of the day.

Let them see your face, my child, and thus know the meaning of all things; let them love you and thus love each other.

Come and take your seat in the bosom of the limitless, my child. At sunrise open and raise your heart like a blossoming flower, and at sunset bend your head and in silence complete the worship of the day.

For the full text of The Crescent Moon [Click Here] 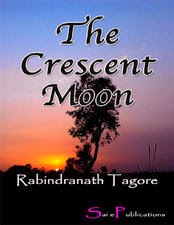