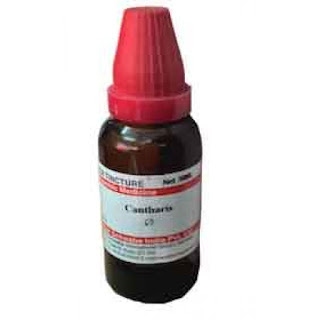 As an external remedy Cantharis will prevent blisters forming in cases of accidents by fire [burns or injuries from heated solids & scalds or injuries from heated liquids] if applied with sufficient promptness. In all cases of burns or scalds, one of the first things to do is, to prevent the air from access to the injured surface for which cotton wool or cotton of close texture is required. The tender skin of children is often roughened and scaled by exposure to cold winds. Make a lotion, by adding 5 drops of Cantharis tincture to 250 ml of water; with this sponge the exposed skin keeping it wet by repeated application. Internal treatment -- one globule of Cantharis 200c.

Cases* illustrative of the homeopathic healing of burns and scalds:

A lad aged fifteen was scalded on the right leg from near the knee down to the instep. In taking off his stocking it was noticed that several blisters have formed, a large one round the heel and three smaller ones. He was treated with Cantharis lotion. No pain remained after 24 hours.  No fresh blisters and in those already formed, the fluid was absorbed. In four days his leg was quite well and he attended his work as usual.

A little girl two years old fell with her right arm upon a hot poker. The skin did not appear much injured; she soon ceased crying and little notice was taken of the circumstance. The next day, however, she was very feverish and complained of sore arm. Cantharis lotion was now applied and one globule of Cantharis given internally. This treatment lessened the pain and reduced the fever. Eventually she became alright. This should teach that promptness and care are very desirable in such cases.

Let me give an illustration of the efficacy of Cantharis Q in the treatment of scalds from my personal life.  This accident happened in the late 1970's; it was a weekend. Rice cooking was over in a pressure cooker; I went to switch off the gas stove. All of a sudden, the pressure valve gave way and a steaming jet of cooked rice issued forth from the cooker and covered my face and head in no time.

I had the presence of mind to take out a large basin, filled it with water, pour some Cantharis tincture into it; dipped a nice towel into it; and applied it to my face and head, keeping them wet with the lotion. Internally, I took one globule of Cantharis 200c. I was normal the next day. 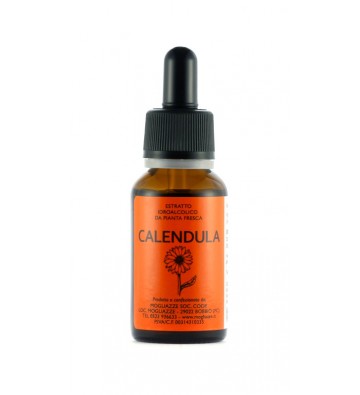 "Calendula cannot be ignored in cuts with laceration, surface or open injuries," writes Dr JT Kent in his "Materia Medica" [p.354].  "Dilute Calendula used locally will keep the wound odorless, will reduce the amount of pus and favor granulation in the very best possible manner and thus it assists the surgeon in healing up surface wounds. Calendula is all the dressing you will need for open wounds and severe lacerations. It takes away the local pain and suffering."

The following cases*, illustrative of its use in lacerated wounds are worthy of place here:

"A coachman was kicked by his horse on the lower hip which was much torn; the laceration was one inch in length and indented. Compresses were applied to the wound moistened with Calendula Q. After a lapse of three days, the wound healed  and the mark left after healing was scarcely perceptible.

Miss H had a fall down stairs. She had several contusions on the chest a deep hole on the forehead and another hole on the tip and back of the nose. Calendula was applied and the healing was so perfect that no one would suspect there had ever been a wound of any kind.

Mr C had the misfortune to have his fingers caught in the wheel of a mill. The anterior joint of the index finger and the two joints of the ring finger were torn off entirely and the fleshy part of the tip of the middle finger was likewise carried away. A small portion of the bare bone of the second joint of the ring finger had remained and the patient was very anxious to have it taken off. I [Dr Thorer] left it, however, in the hope that the granulation might be favourable and cover this little remnant of the joint with flesh. Calendula was applied on the second day after the occurrence of the acccident. The result of the application was very satisfactory. The wounds did not suppurate  and the granulation went on undisturbed to the termination of the cure. The index finger joint had become covered with flesh.

While cutting a cork with a scalpel, my hand slipped, and I [Dr Thorer] cut the top of the left thumb and thumbnail half way down the nail. I instantly applied pure tincture of Calendula on a cotton rag, which I wrapped round the thumb. On examination four hours afterwards, there was no mark of the cut upon the thumb; the pain was taken away in a few minutes after the application.

Master W had the upper lip cut completely through and the lower lip cut slightly by a stone thrown at him by another boy. The cut was of so decided a character that his father wished me to sew it up, but having full confidence in the power of Calendula to heal the wound, I did not do so. The lip was well cleansed with a lotion of Calendula and then strapped up with Calendula plaster and in less than forty-four hours, when the plaster was removed, the wound had completely healed, leaving a very faint line about half an inch long, showing where the hurt had been.

I have observed that Calendula, in most instance, seems at once to contract the mouths of small arteries."

HOMEOPATHIC HOME REMEDIES consist of a basic set of homeopathic single remedies, which help in treating all types of aches and pains, boils, cuts and bruises, insect bites, and many common ailments. Each single remedy is marked with its key indications.

Homeopathic medicines have no harmful side-effects, have no expiry dates when stored safely away from strong odors and sunlight, and are cheap [hence no duplicates].

01  Calendula Q [for cuts with laceration, open or surface wounds]
02  Cantharis Q  [for burns and scalds]

03  Hypericum [nerves affected when fingers are crushed or nails are torn off]
04  Ledum-pal [punctured wounds by rusty nail, insect bites]

I chanced to come across it as an appendix in Dr William Boericke's "Compend on the Principles of Homeopathy".  Given below are some excerpts. The link to the full text of Dr Lilienthal's  book is is also provided at the end.

Catechism, by definition, refers to Instructions in the form of Questions and Answers.  Dr Lilienthal's work contains answers only.

1. The physician's highest and only calling is to restore health to the sick, which is called healing.

2. Healing ought to be accomplished in the most speedy, most gentle, and most reliable manner.

3. To do this he must know the ailment of the patient, select the remedy, the dose and its repetition according to each individual case.

4. Sanitation and hygiene are studies in which every physician must be well versed.

5. Constitution of the patient, his mind and temperament, occupation, mode of living and habits, social and domestic relations, age and sexual functions, etc. give us the individuality of the patient.

6. Deviations from the normal state show themselves by morbid signs or symptoms.

7. The totality of these symptoms, this outwardly reflected image of the inner nature of the diseased state, i.e., of the suffering dynamic, or living force, is the principal and only condition to be recognized in order that they may be removed and health restored.

8. Life, a dynamic principle, animates the material body, and this material body passes away as soon as it is bereft of this life-force. In health, harmonious vital processes go on in our mind and body, and in sickness this life-force becomes deranged by the dynamic influence of some morbific agency inimical to life, hence abnormal functional activity, manifesting itself by morbid sensations and functions, by morbid symptoms.

9. This morbidly changed life-force can only be restored to its normal state by a similarly acting dynamical power of the appropriate remedy, acting upon the omnipresent susceptibility of the nerves of the organism. The total removal of all symptoms is health restored, and therefore the totality of symptoms observed in each individual case can be the only indication to guide us in the selection of a remedy.

10. These aberrations from the state of health can only be removed by the curative power inherent in medicine to turn the sensorial condition of the body again into its normal state.

See the Appendix for Dr Samuel Lilienthal's "A Catechism on Samuel Hahnemann's Organon".

Posted by Raghunathan Srinivasan at 04:00 2 comments: