THOREAU H D: WALDEN: "WHERE I LIVED AND WHAT I LIVED FOR"

Henry David Thoreau [1817-1862] was a philosopher, poet, essayist, and naturalist as well as an outspoken social critic. He was born in Concord, Massachusetts, and was educated of Harvard. He worked at a variety of professions, from land surveyor to teacher to pencil maker. He is best known for his book "Walden, or Life in the Woods", published in 1854.

"I lived alone, in the woods, a mile from any neighbor, in a house which I had built myself, on the shore of Walden Pond, in Concord, Massachusetts, and earned my living by the labor of my hands only. I lived there two years and two months."

With these words, Henry David Thoreau began the tale of his experiment of simple living at Walden Pond. Over the course of the next three hundred-odd pages, Thoreau outlined his philosophy of life, politics, and nature, laying the foundation for a secure place in the canon of great American writers.

Thoreau's words expressed the concerns of many of his contemporaries as industrialization and war permanently altered the world around them, just as they struck a chord in a generation of young people in the 1960s and 1970s who opposed the modern military-industrial complex and sought peace and simplicity in their lives. For many, Walden has served as a touchstone.

This selection is from the second chapter of Walden titled --

WHERE I LIVED, AND WHAT I LIVED FOR

I was seated by the shore of a small pond, about a mile and a half south of the village of Concord and somewhat higher than it, in the midst of an extensive wood between that town and Lincoln, and about two miles south of that our only field known to fame, Concord Battle Ground; but I was so low in the woods that the opposite shore, half a mile off, like the rest, covered with wood, was my most distant horizon.

For the first week, whenever I looked out on the pond it impressed me like a tarn high up on the side of a mountain, its bottom far above the surface of other lakes, and, as the sun arose, I saw it throwing off its nightly clothing of mist, and here and there, by degrees, its soft ripples or its smooth reflecting surface was revealed, while the mists, like ghosts, were stealthily withdrawing in every direction into the woods, as at the breaking up of some nocturnal conventicle. The very dew seemed to hang upon the trees later into the day than usual, as on the sides of mountains.

This small lake was of most value as a neighbor in the intervals of a gentle rain-storm in August, when, both air and water being perfectly still, but the sky overcast, mid-afternoon had all the serenity of evening, and the wood thrush sang around, and was heard from shore to shore. A lake like this is never smoother than at such a time; and the clear portion of the air above it being, shallow and darkened by clouds, the water, full of light and reflections, becomes a lower heaven itself so much the more important.

From a hill-top near by, where the wood had been recently cut off, there was a pleasing vista southward across the pond, through a wide indentation in the hills which form the shore there, where their opposite sides sloping toward each other suggested a stream flowing out in that direction through a wooded valley, but stream there was none.

That way I looked between and over the near green hills to some distant and higher ones in the horizon, tinged with blue. Indeed, by standing on tiptoe I could catch a glimpse of some of the peaks of the still bluer and more distant mountain ranges in the northwest, those true-blue coins from heaven's own mint, and also of some portion of the village. But in other directions, even from this point, I could not see over or beyond the woods which surrounded me.

It is well to have some water in your neighborhood, to give buoyancy to and float the earth. One value even of the smallest well is, that when you look into it you see that earth is not continent but insular. This is as important as that it keeps butter cool. When I looked across the pond from this peak toward the Sudbury meadows, which in time of flood I distinguished elevated perhaps by a mirage in their seething valley, like a coin in a basin, all the earth beyond the pond appeared like a thin crust insulated and floated even by this small sheet of interverting water, and I was reminded that this on which I dwelt was but dry land.

Though the view from my door was still more contracted, I did not feel crowded or confined in the least. There was pasture enough for my imagination. The low shrub oak plateau to which the opposite shore arose stretched away toward the prairies of the West and the steppes of Tartary, affording ample room for all the roving families of men. "There are none happy in the world but beings who enjoy freely a vast horizon"- said Damodara, when his herds required new and larger pastures...

...Every morning was a cheerful invitation to make my life of equal simplicity, and I may say innocence, with Nature herself. I have been as sincere a worshipper of Aurora as the Greeks. I got up early and bathed in the pond; that was a religious exercise, and one of the best things which I did. They say that characters were engraven on the bathing tub of King Tching-thang to this effect: "Renew thyself completely each day; do it again, and again, and forever again."

I can understand that. Morning brings back the heroic ages. I was as much affected by the faint burn of a mosquito making its invisible and unimaginable tour through my apartment at earliest dawn, when I was sailing with door and windows open, as I could be by any trumpet that ever sang of fame. It was Homer's requiem; itself an Iliad and Odyssey in the air, singing its own wrath and wanderings. There was something cosmical about it; a standing advertisement, till forbidden, of the everlasting vigor and fertility of the world.

The morning, which is the most memorable season of the day, is the awakening hour. Then there is least somnolence in us; and for an hour, at least, some part of us awakes which slumbers all the rest of the day and night. Little is to be expected of that day, if it can be called a day, to which we are not awakened by our Genius, but by the mechanical nudgings of some servitor, are not awakened by our own newly acquired force and aspirations from within, accompanied by the undulations of celestial music, instead of factory bells, and a fragrance filling the air- to a higher life than we fell asleep from; and thus the darkness bear its fruit, and prove itself to be good, no less than the light.

I went to the woods because I wished to live deliberately, to front only the essential facts of life, and see if I could not learn what it had to teach, and not, when I came to die, discover that I had not lived. I did not wish to live what was not life, living is so dear; nor did I wish to practise resignation, unless it was quite necessary.

I wanted to live deep and suck out all the marrow of life, to live so sturdily and Spartan- like as to put to rout all that was not life, to cut a broad swath and shave close, to drive life into a corner, and reduce it to its lowest terms, and, if it proved to be mean, why then to get the whole and genuine meanness of it, and publish its meanness to the world; or if it were sublime, to know it by experience, and be able to give a true account of it in my next excursion.

Simplicity, simplicity, simplicity! I say, let your affairs be as two or three, and not a hundred or a thousand; instead of a million count half a dozen, and keep your accounts on your thumb-nail. In the midst of this chopping sea of civilized life, such are the clouds and storms and quicksands and thousand-and-one items to be allowed for, that a man has to live, if he would not founder and go to the bottom and not make his port at all, by dead reckoning, and he must be a great calculator indeed who succeeds.

Simplify, simplify. Instead of three meals a day, if it be necessary eat but one; instead of a hundred dishes, five; and reduce other things in proportion.

The nation itself, with all its so- called internal improvements, which, by the way are all external and superficial, is just such an unwieldy and overgrown establishment, cluttered with furniture and tripped up by its own traps, ruined by luxury and heedless expense, by want of calculation and a worthy aim, as the million households in the land; and the only cure for it, as for them, is in a rigid economy, a stern and more than Spartan simplicity of life and elevation of purpose...


Text of "Where I Lived and What I Lived For" by Thoreau: [Click Here] 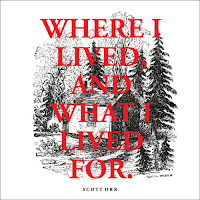 Full Text of WALDEN or Life in the Woods: [Click Here] 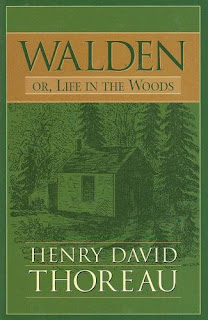