JAMES HERRIOT: "ALL CREATURES GREAT AND SMALL": THE LITTLE MIRACLE

2016-17  James Herriot: "All Creatures Great and Small": The Little Miracle

James Alfred Wight [1916-1995], known by the pen name James Herriot, was a  British veterinary surgeon and writer, who used his many years of experiences as a veterinary surgeon to write a series of semi -autobiographical books about rural life in Yorkshire.

In 1972, a collection of his works, "All Creatures Great and Small", became an instant classic. His books, 18 in all, sold 60 million copies worldwide, and inspired two movies and a BBC serial.  Success seemed to have little effect on his daily routine. "If a farmer has a sick cow," he said,  "they don't want Chales Dickens turning up; they want a good vet. And that's what I have tried to be."

His collected works include

CALVING HEAD BACK – THE LITTLE MIRACLE

They didn’t say anything about this in the books, I thought, as the snow blew in through the gaping doorway and settled on my naked back.

I lay face down on the cobbled floor in a pool of nameless muck, my arm deep inside the straining cow, my feet scrabbling for a toe hold between the stones. I was stripped to the waist and the snow mingled with the dirt and the dried blood on my body. I could see nothing outside the circle of flickering light thrown by the smoky oil lamp which the farmer held over me.

No, there wasn’t a word in the books about searching for your ropes and instruments in the shadows; about trying to keep clean in a half bucket of tepid water; about the cobbles digging into your chest. Nor about the slow numbing of the arms, the creeping paralysis of the muscles as the fingers tried to work against the cow’s powerful expulsive efforts.

There was no mention anywhere of the gradual exhaustion, the feeling of futility and the little far-off voice of panic.

My mind went back to that picture in the obstetrics book. A cow standing in the middle of a gleaming floor while a sleek veterinary surgeon in a spotless parturition overall inserted his arm to a polite distance. He was relaxed and smiling, the farmer and his helpers were smiling, even the cow was smiling. There was no dirt or blood or sweat anywhere.

That man in the picture had just finished an excellent lunch and had moved next door to do a bit of calving just for the sheer pleasure of it, as a kind of dessert. He hadn’t crawled shivering from his bed at two o’clock in the morning and bumped over twelve miles of frozen snow, staring sleepily ahead till the lonely farm showed in the headlights. He hadn’t climbed half a mile of white fell-side to the doorless barn where his patient lay...

...“Well now, what have you found, young man?” Uncle’s penetrating voice cut through the silence. “Head back, eh? You won’t have much trouble, then. I’ve seen Mr. Broomfield do ’em like that—he turns calf right round and brings it out back legs first.”

I had heard this sort of nonsense before. A short time in practice had taught me that all farmers were experts with other farmers’ livestock. When their own animals were in trouble they tended to rush to the phone for the vet, but with their neighbours’ they were confident, knowledgeable and full of helpful advice. And another phenomenon I had observed was that their advice was usually regarded as more valuable than the vet’s. Like now, for instance; Uncle was obviously an accepted sage and the Dinsdales listened with deference to everything he said.

“Another way with a job like this,” continued Uncle, “is to get a few strong chaps with ropes and pull the thing out, head back and all.”

I gasped as I felt my way around. “I’m afraid it’s impossible to turn a calf completely round in this small space. And to pull it out without bringing the head round would certainly break the mother’s pelvis.”

The Dinsdales narrowed their eyes. Clearly they thought I was hedging in the face of Uncle’s superior knowledge.

And now, two hours later, defeat was just round the corner. I was just about whacked. I had rolled and grovelled on the filthy cobbles while the Dinsdales watched me in morose silence and Uncle kept up a non-stop stream of comment.

Uncle, his ruddy face glowing with delight, his little eyes sparkling, hadn’t had such a happy night for years. His long trek up the hillside had been repaid a hundredfold. His vitality was undiminished; he had enjoyed every minute.

As I lay there, eyes closed, face stiff with dirt, mouth hanging open, Uncle took his pipe in his hand and leaned forward on his straw bale. “You’re about beat, young man,” he said with deep satisfaction. “Well, I’ve never seen Mr. Broomfield beat but he’s had a lot of experience. And what’s more, he’s strong, really strong. That’s one man you couldn’t tire.”

Rage flooded through me like a draught of strong spirit. The right thing to do, of course, would be to get up, tip the bucket of bloody water over Uncle’s head, run down the hill and drive away; away from Yorkshire, from Uncle, from the Dinsdales, from this cow.

Instead, I clenched my teeth, braced my legs and pushed with everything I had; and with a sensation of disbelief I felt my noose slide over the sharp little incisor teeth and into the calf’s mouth. Gingerly, muttering a prayer, I pulled on the thin rope with my left hand and felt the slipknot tighten. I had hold of that lower jaw.

At last I could start doing something. “Now hold this rope, Mr. Dinsdale, and just keep a gentle tension on it. I’m going to repel the calf and if you pull steadily at the same time, the head ought to come round.”

“What if the rope comes off?” asked Uncle hopefully.

I didn’t answer. I put my hand in against the calf’s shoulder and began to push against the cow’s contractions. I felt the small body moving away from me. “Now a steady pull, Mr. Dinsdale, without jerking.” And to myself, “Oh God, don’t let it slip off.”

The head was coming round. I could feel the neck straightening against my arm, then the ear touched my elbow. I let go the shoulder and grabbed the little muzzle. Keeping the teeth away from the vaginal wall with my hand, I guided the head till it was resting where it should be, on the fore limbs.

Quickly I extended the noose till it reached behind the ears. “Now pull on the head as she strains.”

“Nay, you should pull on the legs now,” cried Uncle.

“Pull on the bloody head rope, I tell you!” I bellowed at the top of my voice and felt immediately better as Uncle retired, offended, to his bale.

With traction the head was brought out and the rest of the body followed easily. The little animal lay motionless on the cobbles, eyes glassy and unseeing, tongue blue and grossly swollen.

“It’ll be dead. Bound to be,” grunted Uncle, returning to the attack.

I cleared the mucus from the mouth, blew hard down the throat and began artificial respiration. After a few pressures on the ribs, the calf gave a gasp and the eyelids flickered. Then it started to inhale and one leg jerked.

Uncle took off his hat and scratched his head in disbelief. “By gaw, it’s alive. I’d have thowt it’d sure to be dead after you’d messed about all that time.” A lot of the fire had gone out of him and his pipe hung down empty from his lips.

“I know what this little fellow wants,” I said. I grasped the calf by its fore legs and pulled it up to its mother’s head. The cow was stretched out on her side, her head extended wearily along the rough floor. Her ribs heaved, her eyes were almost closed; she looked past caring about anything. Then she felt the calf’s body against her face and there was a transformation; her eyes opened wide and her muzzle began a snuffling exploration of the new object.


Her interest grew with every sniff and she struggled on to her chest, nosing and probing all over the calf, rumbling deep in her chest. Then she began to lick him methodically. Nature provides the perfect stimulant massage for a time like this and the little creature arched his back as the coarse papillae on the tongue dragged along his skin. Within a minute he was shaking his head and trying to sit up.

I grinned. This was the bit I liked. The little miracle. I felt it was something that would never grow stale no matter how often I saw it. I cleaned as much of the dried blood and filth from my body as I could, but most of it had caked on my skin and not even my finger nails would move it. It would have to wait for the hot bath at home. Pulling my shirt over my head, I felt as though I had been beaten for a long time with a thick stick. Every muscle ached. My mouth was dried out, my lips almost sticking together.

A long, sad figure hovered near. “How about a drink?” asked Mr. Dinsdale.

I could feel my grimy face cracking into an incredulous smile. A vision of hot tea well laced with whisky swam before me. “That’s very kind of you, Mr. Dinsdale, I’d love a drink. It’s been a hard two hours.”

“Nay,” said Mr. Dinsdale looking at me steadily, “I meant for the cow.”

I gathered up my tackle and stumbled out of the barn. On the moor it was still dark and a bitter wind whipped over the snow, stinging my eyes. As I plodded down the slope, Uncle’s voice, strident and undefeated, reached me for the last time.

“Mr. Broomfield doesn’t believe in giving a drink after calving. Says it chills the stomach.”

A Guide to "All Creatures Great and Small" by James Herriot: [Click Here] 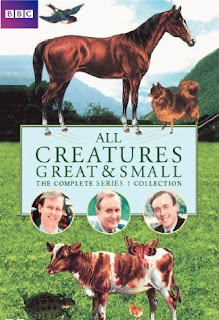 Full text of "All Creatures Great and Small" by James Herriot: [Click Here] 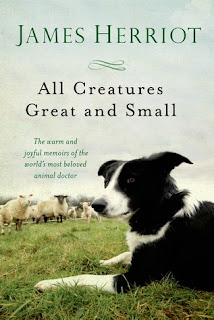