Elbert Green Hubbard [1856-1915] was a renowned  American writer, publisher, artist, philosopher, and founder of the Roycroft Arts and Crafts community, and biographer. He wrote Little Journeys to the Homes of the Great (Vols. 1-9), a series of one hundred and eighty biographies of highly influential literary figures including Charles Dickens, George Eliot, Jean Jacques Rousseau, Jonathan Swift, William Shakespeare, and Walt Whitman, and is best known as the author of  "A Message to Garcia". 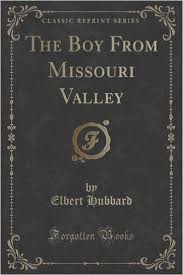 Well, it wasn't so very long ago only about twenty-three years. I was foreman of a factory, and he lived a thousand miles away, at Missouri Valley, Iowa.

I was twenty-four, and he was fourteen. His brother was traveling for the Firm, and one day this brother showed me a letter from the lad in Missouri Valley. The missive was so painstaking, so exact, and revealed the soul of the child so vividly, that I laughed aloud a laugh that died away to a sigh.

The boy was beating his wings against the bars of Missouri Valley; he wanted opportunity. And all he got was unending toil, dead monotony, stupid misunderstanding, and corn-bread and molasses.

There wasn't love enough in Missouri Valley to go round that was plain. The boy's mother had been of the Nancy Hanks type, worn, yellow and sad and had given up the fight and been left to sleep her long sleep in a prairie grave on one of the many migrations. The father's ambition had got stuck in the mud, and under the tongue-lash of a strident, strenuous, gee-haw consort, he had run up the white flag. The boy wanted to come East.

It was a dubious investment, a sort of financial plunge, a blind pool to send for this buckwheat midget. The fare was thirty-three dollars and fifty cents. The Proprietor, a cautious man, said that the boy wasn't worth the money. There were plenty of boys; the alleys swarmed with them. So there the matter rested.

But the lad in Missouri Valley didn't let it rest long. He had been informed that we did not consider him worth thirty three dollars and fifty cents, so he offered to split the difference. He would come for half -- he could ride on half-fare -- the Railroad Agent at Missouri Valley said that if he bought a half-fare ticket, got on a train, and explained to the conductor and everybody that he was eleven, going on twelve, and stuck to it, it would be all right; and he would not expect any wages until he had paid us back.

He had no money of his own, all he earned was taken from him by the kind folks with whom he lived, and would be until noon of the day he was twenty-one years old. Did we want to invest sixteen dollars and seventy five cents in him?

We waxed reckless and sent the money more than that, we sent a twenty-dollar bill. We plunged!

In just a week the investment arrived. He did not advise when he would come, or how. He came, we saw, he conquered. Why should he advise of his coming? He just reported, and his first words were the Duke's motto : "I am here."

..."I am here!" said the lad, and he planked down on the desk three dollars and twenty-five cents. It was the change from the twenty-dollar bill. "Didn't you have to spend any money on the way here?" I asked. "No, I had all I wanted to eat," he replied, and pointed to a basket that sat on the floor.

I called in the Proprietor, and we looked the lad over. We walked around him twice, gazed at each other, and adjourned to the hallway for consultation. The boy was not big enough to do a man's work, and if we set him to work in the factory with the city boys, they would surely pick on him and make life for him very uncomfortable.

He had a half-sad and winsome look that had won from our hard hearts something akin to pity. He was so innocent, so full of faith, and we saw at a glance that he had been overworked, underfed -- at least misfed -- and underloved. He was different from other boys and in spite of the grime of travel, and the freckles, he was pretty as a ground-squirrel.

So I went back and got the letter-book. But the boy's head only come to the top of the stand-up desk, and when he reached for the letter-book on the desk he had to grope for it. I gave him my high-stool, but this was too low.

We found him a boarding-place with a worthy widow whose children had all grown big and flown. Her house was empty, and so was her mother-heart; she was like that old woman in Rab, who was placed on the surgeon's table and given chloroform, and who held to her breast an imaginary child, and crooned a lullaby to a babe, dead thirty years before. So the boy boarded with the widow and worked in the office.

He indexed the letter-book, he indexed everything. And then he filed everything, letters, bills, circulars. He stamped the letters going out, swept the office, and dusted things that had never been dusted before. He was orderly, alert, active, cheerful, and the Proprietor said to me one day, "I wonder how we ever got along without that boy from Missouri Valley!"

...Twenty-three years! That factory has grown to be the biggest of its kind in America. The red-haired boy from Missouri Valley is its manager. Emerson says, "Every great institution is the lengthened shadow of a single man."

Full Text of "The Boy from Missouri Valley" by Elbert Hubbard: [Click Here]