The cardinal symptoms of Arsenicum Album are anguish, restlessness, prostration, burning pains relieved by heat and midnight, after midnight and 1 a.m.  [and 1 p.m.] aggravation. Fear of death, not the Aconite fear, but an anxiety and a feeling that it is useless to take any medicine, as he is surely going to die.

Dr. Hahnemann says in his Materia Medica Pura, "A sensible homeopathic physician will not give this remedy unless he is convinced that its peculiar symptoms have the greatest possible resemblance to those of the patient to be cured. When this is the case, it is certain to be efficacious... Such employment of Arsenic has shown its curative power in countless cases: in various kinds of fevers, in varicose veins, in vomiting after almost every kind of food, excessive loss of blood at the menstrual period, in constipation, in leucchorroea, in indurations of the liver, painful swelling of the inguinal glands, etc." 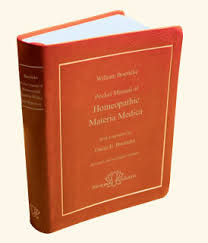