LEO TOLSTOY: WHAT MEN LIVE BY


Leo Tolstoy [1828-1910], was a Russian author, a master of realistic fiction and one of the world’s greatest novelists. Tolstoy is best known for his two longest works, War and Peace (1865–69) and Anna Karenina (1875–77), which are commonly regarded as among the finest novels ever written. During his last three decades Tolstoy also achieved world renown as a moral and religious teacher. His doctrine of nonresistance to evil had an important influence on Mahatma Gandhi. He was the embodiment of nature and pure vitality, the incarnation of the world’s conscience. He was not just one of the greatest writers who ever lived but a living symbol of the search for life’s meaning.

WHAT MEN LIVE BY 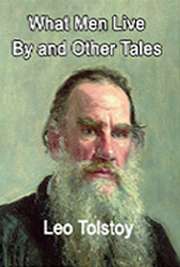 A kind and humble shoemaker called Simon goes out one day to purchase sheep-skins in order to sew a winter coat for his wife and himself to share. Usually the little money which Simon earns would be spent to feed his wife and children. Simon decides that in order to afford the skins he must go on a collection to receive the five rubles and twenty kopeks owed to him by his customers. As he heads out to collect the money he also borrows a three-ruble note from his wife's money box. While going on his collection he only manages to receive twenty kopeks rather than the full amount. Feeling disheartened by this, Simon rashly spends the twenty kopeks on vodka and starts to head back home.

On his way home he rants to himself about how little he can do with twenty kopeks besides spending it on alcohol and, feeling warmed after the drink, he says to himself that the winter cold is bearable without a sheep-skin coat. While approaching the chapel at the bend of the road, Simon stops and notices something pale-looking leaning against it. He peers harder and notices that it is a naked man who appears poor of health. At first he is suspicious and fears that the man may have no good intentions if he is in such a state. He proceeds to pass the man until he sees that the man has lifted his head and is looking towards him. Simon debates what to do in his mind and feels ashamed for his disregard and heads back to help the man.

Simon takes off his cloth coat and wraps it around the stranger. He also gives him the extra pair of boots he was carrying. He aids him as they both walk toward Simon's home. Though they walk together side by side, the stranger barely speaks and when Simon asks how he was left in that situation the only answers the man would give are: "I cannot tell" and "God has punished me." Meanwhile, Simon's wife Matrena debates whether or not to bake more bread for the night's meal so that there is enough for the following morning's breakfast. She decides that the loaf of bread that they have left would be ample enough to last till the next morning. As she sees Simon approaching the door she is angered to see him with a strange man who is wrapped in Simon's clothing.
Matrena immediately expresses her displeasure with Simon, accusing him and his strange companion to be drunkards and harassing Simon for not returning with the sheep-skin needed to make a new coat. Once the tension settles down she bids that the stranger sit down and have dinner with them. After seeing the stranger take bites at the bread she placed for him on his plate, she begins to feel pity and shows so in her face. When the stranger notices this, his grim expression lights up immediately and he smiles for one brief moment. After hearing the story from the stranger of how Simon had kindly robed the stranger after seeing him in his naked state, Matrena grabs more of Simon's old clothing and gives it to the stranger.
The following morning Simon addresses the stranger and asks his name. The stranger answers that his name is simply Michael. Simon explains to Michael that he can stay in his household as long as he can earn his keep by working as an assistant for Simon in his shoe-making business. Michael agrees to these terms and for a few years he remains a very faithful assistant.
One winter day a customer who is a nobleman comes in their shop. The nobleman outlines strict conditions for the making of a pair of thick leather boots: they should not lose shape nor become loose at the seams for a year, or else he would have Simon arrested. When Simon gives to Michael the leather that the nobleman had given them to use, Michael appears to stare beyond the nobleman's shoulder and smiles for the second time since he has been there. As Michael cuts and sews the leather, instead of making thick leather boots, he makes a pair of soft leather slippers. Simon is too late when he notices this and cries to Michael asking why he would do such a foolish thing. Before Michael can answer, a messenger arrives at their door and gives the news that the nobleman has died and asks if they could change the order to slippers for him to wear on his death bed. Simon is astounded by this and watches as Michael gives the messenger the already-made leather slippers. Time continues to go by and Simon is very grateful for Michael's faithful assistance.
In the sixth year, another customer comes in who happens to be a woman with two girls, one of which is crippled. The woman requests if she could order a pair of leather shoes for each of the girls — three shoes of the same size, since they both share the same shoe size, and another shoe for the crippled girl's lame foot. As they are preparing to fill the order Michael stares intently at the girls and Simon wonders why he is doing so. As Simon takes the girls' measurements he asks the woman if they are her own children and how was the girl with the lame foot crippled. The woman explains that she has no relation to them and that the mother on her deathbed accidentally crushed the leg of the crippled girl. She expresses that she could not find it in her heart to leave them in a safe home or orphanage and took them as her own. When Michael hears this he smiles for the third time since he has been there.
After the woman and the two children finally left, Michael approaches Simon and bids him farewell explaining that God has finally forgiven him. As Michael does this he begins to be surrounded by a heavenly glow and Simon acknowledges that he is not an ordinary man. Simon asks him why light emits from him and why did he smile only those three times.
Michael explains that he is an angel who was given the task to take away a woman's life so she could pass on to the next life. He allowed the woman to live because she begged that she must take care of her children for no one other than their mother could care for them. When he did this God punished him for his disobedience and commanded that he must find the answers to the following questions in order to be an angel again: What dwells in man?, What is not given to man?, and What do men live by?

After Michael returned to earth to take the woman's soul, the woman's lifeless body rolled over and crushed the leg of the now crippled girl. Then Michael's wings left him and he no longer was an angel but a naked and mortal man. When Simon rescued him he knew that he must begin finding the answers to those questions. He learned the answer to the first question when Matrena felt pity for him, thus smiling and realizing that what dwells in man is "love".
The answer to the second question came to him when he realized that the angel of death was looming over a nobleman who was making preparations for a year though he would not live till sunset; thus Michael smiled, realizing that what is not given to man is "to know his own needs." 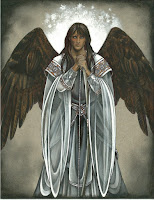 For the Full Story of "What Men Live By" by Leo Tolstoy: [Click Here] 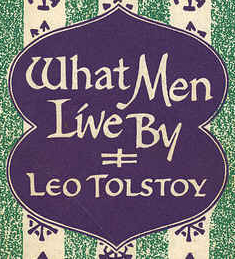 Full AudioBook "What Men Live By and Other Stories": [Click Here] 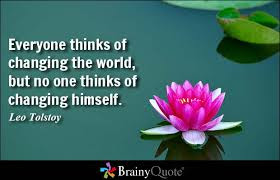