Arnica Montana is the Latin name for a perennial that grows 1 to 2 feet tall with bright, yellow daisy-like flowers that appear in July and August, all the world over in mountainous regions.
St. Hildegard, with her keen observation of nature wrote about the healing properties of the Arnica montana plant in the 12th century. Since the 16th century, mountain people in the Alpine area have used it to relieve muscle aches and bruises.
Today, Arnica has grown to be one of the most popular homeopathic medicines throughout the world. It is trusted by professional athletes to soothe sore muscles, by prominent cosmetic surgeons to relieve post-procedure pain, and by savvy moms to treat playground bumps and bruises.


Dr Hahnemann says of Arnica, "It is very beneficial not only in injuries with severe contusions and lacerations of fibres, but also in the most severe wounds by bullets and blunt weapons: in the pains and other ailments consequent on extraction of teeth and other surgical operations; as also after dislocation of  joints, after setting fractures of bones, etc."
Dr Kent gives some striking little pictures of the action of Arnica:  "After railway or road accident," "horror of instant death with cardiac symptoms at night. He goes off into a sleep of terror, jumps up again with this sudden fear of death and says, 'Send for a doctor, at once.' And this may happen night after night."
Dr Margaret Tyler writes: On the other hand, an Arnica case, in desperate sickness, may say, "I am not ill. I do not need a doctor." A French woman, with a very bad form of Typhoid, contracted during a virulent epidemic, with relapse after relapse, proclaimed herself as "so well"; got Arnica and made a rapid recovery. 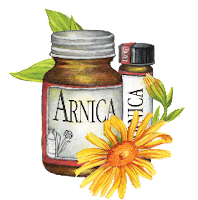 More illustrative cases from Dr M Tyler's "Drug Pictures": Two small girls, of nine and five, brought into hospital by the police, after having been knocked down by taxis. Both comatose and limp. Both were seen by surgeons and pronounced hopeless. Both were given Arnica, and they sat up eat a hearty breakfast, the next morning.
A patient writes from abroad: "My wife has been very ill here, ... but I am happy to say that all has gone well, and Strasbourg echoes amazement at the effect of Arnica 1000 taken six hours after a double ovariotomy with complications. Phosphorus prevented all nausea and shock and Arnica made morphia entirely unnessary. A wonderful piece of work."