Rhus toxicodendron or Rhus tox is made from the plant poison ivy which grows as a shrub or a woody vine. It is one of the most valuable medicines, especially for over-exertion, in Homeopathy. Rhus tox is almost the specific for STRAINS and SPRAINS. It was proved by Hahnemann and icluded in his Materia Medica Pura Part 2.

Rhus tox has great restlessness; cannot lie long in one position, changes often with temporary relief. Lameness and stiffness on beginning to move after rest; better by continued motion.

Dr Hahnemann contrasts the action of Rhus tox with that of Bryonia. "With almost identical symptoms, there is the striking amelioration by avoiding all movement of Bryonia , exactly the opposite of what Rhus-tox does." He calls them "the two antagonistic sister remedies" and tells of their inestimable value in the disastrous war pestilence of 1813. Dr Hahnemann treated it symptomatically with Rhus-tox alternated with Bryonia, as the symptoms changed and demanded the one or the other remedy. And he says that of the 183 cases he treated in Leipsic, not one died, "which created a great sensation among the Russians then ruling in Dresden, but was consigned to oblivion by the medical authoirities."  He says, "If ever there was a triumph for the only true, the homeopathic treatment, this was one."

Dr Farrington describes the use of Rhus tox in fevers: "Rhus tox, when acute diseases take on a typhoid form -- dysentry -- scarlet fever -- diphtheria -- pneumonia... Rhus is indicated when the stools are of dark b lood, with tearing pains down the thighs.

Regarding the extraordinary action of Rhus tox on the skin, Dr Dunham says: "Rhus tox produces a most remarkable imitation of vesicula erysiplelas and is our most valued remedy here... But its grand role is in the treatment of the pustular form."

Dr Nash reports a case: F65 was taken with severe chill, followed by aching pains all over, went into a stupor with low grade delirium muttering and continually tossing from side to side in bed. Baptisia 200 was given with no improvement. Then Sulphur 200; there developed the most intense erysipelas of the head and faceThe eruption was decidedly vesicular. Now the remedy was plain. Rhus tox mm was given. The patient made a rapid and complete recovery.

Dr Trousseau says that he had often used "Rhus tox for paralysis of the lower extremities succeeding on a concussion of the spinal marrow, or a desion of that organ, which did not destroy its tissue."  SKINS, then, and TRAUMATIC PARALYSIS without destruction of the nervous tissue! 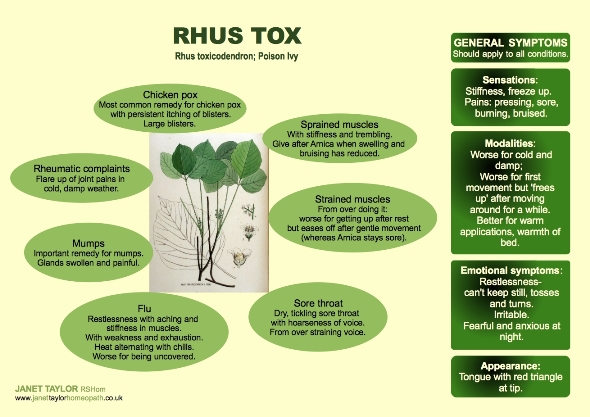 Rhus is a great remedy for over-exertion.  "A player of wind instruments gets pulmonary hemorrhage. Rhus tox will be his remedy. If from violent exertion a patient is seized with paralysis, his troubles may yield to Rhus tox.

In Lumbago, Rhus tox is the remedy whether the patient is better from motion or not.  Rhus tox has great pains in attempting to rise; stiff neck from sitting in a draught; interscapular pains, better from warmth and worse from cold. Rhus is especially indicated in rheumatic gout; and in rheumatic hard swelling of the big toe joint, often mistaken for bunion.

Rhus tox has "Colic, better by bending double and moving about [Coloc better bending, but not from motion]. In orbital cellulitis, Rhus tox is almost a specific." Dr Farrington speaks of Rhus tox as useful in various forms of PARALYSIS, especially in rheumatic patients from over-exertion or exposure to wet, as lying on damp ground. Rhus tox has a great record in the treatment of Lumbago, Sciatica, and Sprains.