As a poet of Nature, Wordsworth stands supreme. He is a worshipper of Nature, Nature’s devotee or high-priest.
His love of Nature was probably truer and tenderer than that of any other English poet, before or since.
Nature comes to occupy in his poem a separate or independent status and is not treated in a casual or passing manner as by poets before him.
Wordsworth had a full-fledged philosophy, a new and original view of Nature. He believed that there is a divine spirit pervading all the objects of Nature.
He believed that the company of Nature gives joy to the human heart and he looked upon Nature as exercising a healing influence on sorrow-stricken hearts.
Above all, he emphasized the moral influence of Nature. He spiritualised Nature and regarded her as a great moral teacher.


I wandered lonely as a cloud
That floats on high o'er vales and hills,
When all at once I saw a crowd,
A host, of golden daffodils;
Beside the lake, beneath the trees,
Fluttering and dancing in the breeze.


Continuous as the stars that shine
And twinkle on the milky way,
They stretched in never-ending line
Along the margin of a bay:
Ten thousand saw I at a glance,
Tossing their heads in sprightly dance.

The waves beside them danced; but they
Out-did the sparkling waves in glee:
A poet could not but be gay,
In such a jocund company:
I gazed—and gazed—but little thought
What wealth the show to me had brought:


For oft, when on my couch I lie
In vacant or in pensive mood,
They flash upon that inward eye
Which is the bliss of solitude;
And then my heart with pleasure fills,
And dances with the daffodils. 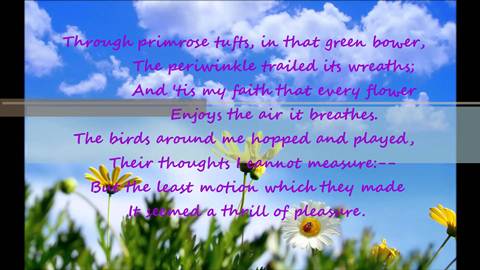 I heard a thousand blended notes,
While in a grove I sate reclined,
In that sweet mood when pleasant thoughts
Bring sad thoughts to the mind.


To her fair works did Nature link
The human soul that through me ran;
And much it grieved my heart to think
What man has made of man.

Through primrose tufts, in that green bower,
The periwinkle trailed its wreaths;
And ’tis my faith that every flower
Enjoys the air it breathes.


The birds around me hopped and played,
Their thoughts I cannot measure:—
But the least motion which they made
It seemed a thrill of pleasure.


The budding twigs spread out their fan,
To catch the breezy air;
And I must think, do all I can,
That there was pleasure there.


If this belief from heaven be sent,
If such be Nature’s holy plan,
Have I not reason to lament
What man has made of man?