I have lost my three legs and am now standing on one only. Are you lamenting for my state of existence? Or are you in a sorry plight because the demigods are now bereft of their share of sacrificial offerings because no sacrifices are being performed at present? Or are you grieving for living beings because of their sufferings due to famine and drought? SB 1.16.20

The so-called administrators are now bewildered by the influence of this Age of Kali, and thus they have put all state affairs into disorder. Are you now lamenting this disorder? Now the general populace does not follow the rules and regulations for eating, sleeping, drinking, mating, etc., and they are inclined to perform such anywhere and everywhere. Are you unhappy because of this? SB 1.16.22

Mother, you are the reservoir of all riches. Please inform me of the root cause of your tribulations by which you have been reduced to such a weak state. I think that the powerful influence of time, which conquers the most powerful, might have forcibly taken away all your fortune, which was adored even by the demigods.  SB 1.16.24

Mother Earth [in the form of a cow] thus replied: O Dharma, whatever you have inquired from me shall be known to you. I shall try to reply to all those questions. Once you too were maintained by your four legs, and you increased happiness all over the universe by the mercy of the Lord. SB 1.16.25

That Personality of Godhead, the reservoir of all goodness and beauty, Lord Śrī Kṛṣṇa, has now closed His transcendental transactions on the face of the earth. In His absence the Age of Kali has spread its influence everywhere, so I am sorry to see this condition of existence. SB 1.16.26-30 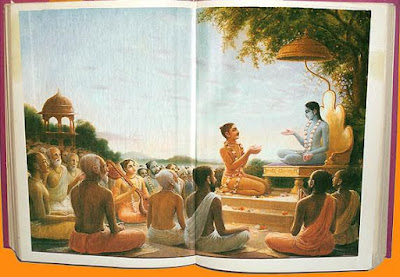