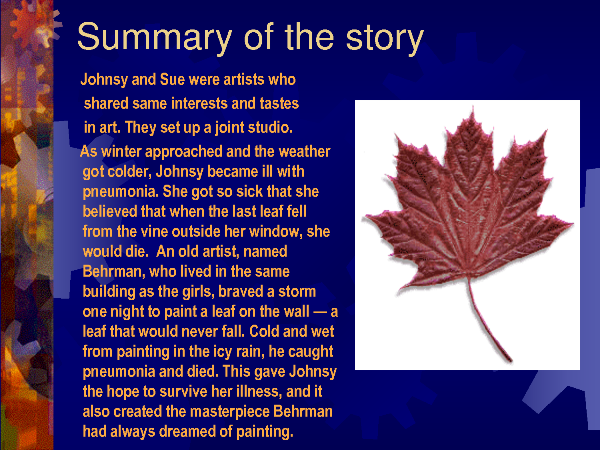 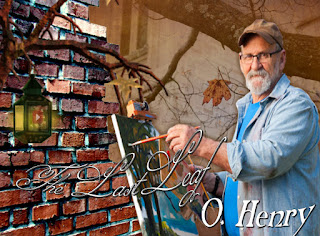 Sue and Johnsy lived at the top of a building with three floors. One of these young women came from Maine, the other from California. They had met at a restaurant on Eighth Street. There they discovered that they liked the same kind of art, the same kind of food, and the same kind of clothes. So they decided to live and work together. That was in the spring.

Toward winter a cold stranger entered Greenwich Village. No one could see him. He walked around touching one person here and another there with his icy fingers. He was a bad sickness. Doctors called him Pneumonia. On the east side of the city he hurried, touching many people; but in the narrow streets of Greenwich Village he did not move so quickly.

One morning the busy doctor spoke to Sue alone in the hall, where Johnsy could not hear. “She has a very small chance,” he said. “She has a chance, if she wants to live. If people don’t want to live, I can’t do much for them. Your little lady has decided that she is not going to get well. Is there something that is troubling her?” “She always wanted to go to Italy and paint a picture of the Bay of Naples,” said Sue. “Paint! Not paint. Is there anything worth being troubled about? A man?” “A man?” said Sue. “Is a man worth—No, doctor. There is not a man.”

“It is weakness,” said the doctor. “I will do all I know how to do. But when a sick person begins to feel that he’s going to die, half my work is useless. Talk to her about new winter clothes. If she were interested in the future, her chances would be better.”

After the doctor had gone, Sue went into the workroom to cry. Then she walked into Johnsy’s room. She carried some of her painting materials, and she was singing. Johnsy lay there, very thin and very quiet. Her face was turned toward the window. Sue stopped singing, thinking that Johnsy was asleep. Sue began to work. As she worked she heard a low sound, again and again. She went quickly to the bedside.

Johnsy’s eyes were open wide. She was looking out the window and counting—counting back. “Twelve,” she said; and a little later, “Eleven”; and then, “Ten,” and, “Nine”; and then, “Eight,” and, “Seven,” almost together. Sue looked out the window. What was there to count? There was only the side wall of the next house, a short distance away. The wall had no window.

An old, old tree grew against the wall. The cold breath of winter had already touched it. Almost all its leaves had fallen from its dark branches. “What is it, dear?” asked Sue. “Six,” said Johnsy, in a voice still lower. “They’re falling faster now. Three days ago there were almost a hundred. It hurt my head to count them. But now it’s easy. There goes another one. There are only five now.” “Five what, dear? Tell your Sue.” “Leaves. On the tree. When the last one falls, I must go, too. I’ve known that for three days. Didn’t the doctor tell you?”

“Oh, I never heard of such a thing,” said Sue. “It doesn’t have any sense in it. What does an old tree have to do with you? Or with your getting well? And you used to love that tree so much. Don’t be a little fool. The doctor told me your chances for getting well. He told me this morning. He said you had very good chances! Try to eat a little now. And then I’ll go back to work. And then I can sell my picture, and then I can buy something more for you to eat to make you strong.” “You don’t have to buy anything for me,” said Johnsy.

She still looked out the window. “There goes another. No, I don’t want anything to eat. Now there are four. I want to see the last one fall before night. Then I’ll go, too.” “Johnsy, dear,” said Sue, “will you promise me to close your eyes and keep them closed? Will you promise not to look out the window until I finish working? I must have this picture ready tomorrow. I need the light; I can’t cover the window.” “Couldn’t you work in the other room?” asked Johnsy coldly.

“Try to sleep,” said Sue. “I must call Behrman to come up here. I want to paint a man in this picture, and I’ll make him look like Behrman. I won’t be gone a minute. Don’t try to move till I come back.”

Old Behrman was a painter who lived on the first floor of their house. He was past sixty. He had had no success as a painter. For forty years he had painted, without ever painting a good picture. He had always talked of painting a great picture, a masterpiece, but he had never yet started it. He got a little money by letting others paint pictures of him. He drank too much. He still talked of his great masterpiece. And he believed that it was his special duty to do everything possible to help Sue and Johnsy.

Sue found him in his dark room, and she knew that he had been drinking. She could smell it. She told him about Johnsy and the leaves on the vine. She said that she was afraid that Johnsy would indeed sail down, down like the leaf. Her hold on the world was growing weaker. Old Behrman shouted his anger over such an idea. “What!” he cried. “Are there such fools? Do people die because leaves drop off a tree? I have not heard of such a thing. No, I will not come up and sit while you make a picture of me. Why do you allow her to think such a thing? That poor little Johnsy!”

“She is very sick and weak,” said Sue. “The sickness has put these strange ideas into her mind. Mr. Behrman, if you won’t come, you won’t. But I don’t think you’re very nice.” “This is like a woman!” shouted Behrman. “Who said I will not come? Go. I come with you. For half an hour I have been trying to say that I will come. God! This is not any place for someone so good as Johnsy to lie sick. Some day I shall paint my masterpiece, and we shall all go away from here. God! Yes.”

Johnsy was sleeping when they went up. Sue covered the window, and took Behrman into the other room. There they looked out the window fearfully at the tree. Then they looked at each other for a moment without speaking. A cold rain was falling, with a little snow in it too.

Behrman sat down, and Sue began to paint. She worked through most of the night. In the morning, after an hour’s sleep, she went to Johnsy’s bedside. Johnsy with wide-open eyes was looking toward the window. “I want to see,” she told Sue. Sue took the cover from the window.

But after the beating rain and the wild wind that had not stopped through the whole night, there still was one leaf to be seen against the wall. It was the last on the tree. It was still dark green near the branch. But at the edges it was turning yellow with age. There it was hanging from a branch nearly twenty feet above the ground. “It is the last one,” said Johnsy. “I thought it would surely fall during the night. I heard the wind. It will fall today, and I shall die at the same time.”

“Dear, dear Johnsy!” said Sue. “Think of me, if you won’t think of yourself. What would I do?” But Johnsy did not answer. The most lonely thing in the world is a soul when it is preparing to go on its far journey. The ties that held her to friendship and to earth were breaking, one by one. The day slowly passed. As it grew dark, they could still see the leaf hanging from its branch against the wall. And then, as the night came, the north wind began again to blow. The rain still beat against the windows. 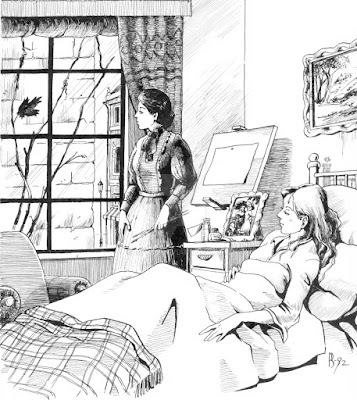 When it was light enough the next morning, Johnsy again commanded that she be allowed to see. The leaf was still there. Johnsy lay for a long time looking at it. And then she called to Sue, who was cooking something for her to eat. “I’ve been a bad girl, Sue,” said Johnsy. “Something has made that last leaf stay there to show me how bad I was. It is wrong to want to die. I’ll try to eat now. But first bring me a looking-glass, so that I can see myself. And then I’ll sit up and watch you cook.”

An hour later she said, “Sue, some day I hope to paint the Bay of Naples.” The doctor came in the afternoon. Sue followed him into the hall outside Johnsy’s room to talk to him. “The chances are good,” said the doctor. He took Sue’s thin, shaking hand in his. “Give her good care, and she’ll get well.

And now I must see another sick person in this house. His name is Behrman. A painter, I believe. Pneumonia, too. Mike is an old, weak man, and he is very ill. There is no hope for him. But we take him to the hospital today. We’ll make it as easy for him as we can.” The next day the doctor said to Sue: “She’s safe. You have done it. Food and care now—that’s all.” 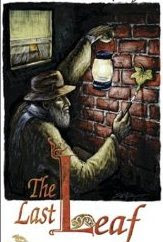 And that afternoon Sue came to the bed where Johnsy lay. She put one arm around her. “I have something to tell you,” she said. “Mr. Behrman died of pneumonia today in the hospital. He was ill only two days. Someone found him on the morning of the first day, in his room. He was helpless with pain.” “His shoes and his clothes were wet and as cold as ice.

Everyone wondered where he had been. The night had been so cold and wild. “And then they found some things. There was a light that he had taken outside. And there were his materials for painting. There was paint, green paint and yellow paint. And— “Look out the window, dear, at the last leaf on the wall. Didn’t you wonder why it never moved when the wind was blowing? Oh, my dear, it is Behrman’s great masterpiece—he painted it there the night that the last leaf fell.”