HW LONGFELLOW: A PSALM OF LIFE 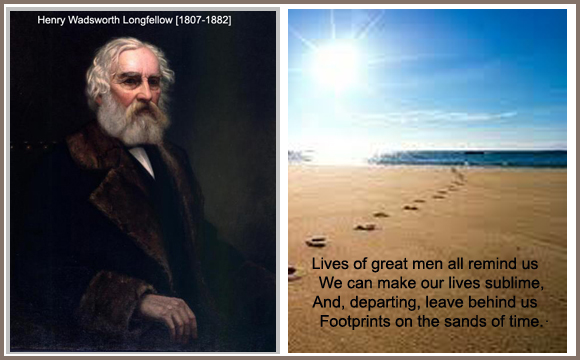 Henry Wadsworth Longfellow [1807-1882] was a commanding figure in the cultural life of nineteenth-century America. Born in Portland, Maine in 1807, he became a national literary figure by the 1850s, and a world-famous personality by the time of his death in 1882.

He was a traveler, a linguist, and a romantic who identified himself with the great traditions of European literature and thought. At the same time, he was rooted in American life and history, which charged his imagination with untried themes and made him unique.

He lived in Cambridge, Massachusetts, where he taught at Harvard, married Fanny Appleton, became a father, and wrote many of his most enduring poems like The Song of Hiawatha, Evangeline, Paul Revere's Ride, The Ladder of St Augustine and A Psalm ofLife.

A Psalm of Life

[What The Heart Of The Young Man Said To The Psalmist.]

Tell me not, in mournful numbers,
Life is but an empty dream!
For the soul is dead that slumbers,
And things are not what they seem.

Life is real! Life is earnest!
And the grave is not its goal;
Dust thou art, to dust returnest,
Was not spoken of the soul.

Not enjoyment, and not sorrow,
Is our destined end or way;
But to act, that each to-morrow
Find us farther than to-day.

Art is long, and Time is fleeting,
And our hearts, though stout and brave,
Still, like muffled drums, are beating
Funeral marches to the grave.

In the world’s broad field of battle,
In the bivouac of Life,
Be not like dumb, driven cattle!
Be a hero in the strife!

Trust no Future, howe’er pleasant!
Let the dead Past bury its dead!
Act,— act in the living Present!
Heart within, and God o’erhead!

Lives of great men all remind us
We can make our lives sublime,
And, departing, leave behind us
Footprints on the sands of time;

Let us, then, be up and doing,
With a heart for any fate;
Still achieving, still pursuing,
Learn to labor and to wait.


Longfellow put this poem aside at first, unwilling to show it to anyone. For, he explained that it was a voice from his inmost heart, at a time when he was rallying from the deep depression caused by the death of his dear wife.

But later, when he allowed it to be published, it went straight to the hearts of millions of people. No poem ever written became so well known so fast. It was taught in schools, recited on the stage, discussed from pulpit to lecture platform.

Generations of school children grew up under the influence of Longfellow's "Psalm". Many prominent men later acknowledged that influence with gratitude. Psalm's  appeal is as vital and timely now, as it ever was.

The call to courage and action of a man emerging from a great sorrow, A Psalm of Life is one of the best-loved and most widely read poems in the world. Its lines are full of faith and hope, its message clear and unmistakable.

"A Psalm of Life" has helped millions of the weary, unhappy and discouraged men and women, to be "up and doing, with a heart for any fate". No poem more richly deserves its place among the all-time inspirational classics of mankind.

[Courtesy Light from Many Lamps - A Treasury of Inspiration by Lillian Eichler Watson  p.126]

Posted by Raghunathan Srinivasan at 19:26