Jean-Francois Millet  [1814-1875]  was a great French painter and one of the founder members  of the Barbizon school in rural France. He was an ardent exponent of Realism and Naturalism. Although educated and trained in Paris, Millet was born into a peasant family from the Normandy region of northern France and he  drew on this background, specializing in scenes of peasant life.

“The human side of art is what touches me most,” he said, "The gay side never shows itself to me. I don't know where it is. I have never seen it. The gayest thing I know is the calm, the silence, which is sweet, both in the forest and in the fields.  You will admit that it is always very dreamy, though often very delicious."

The struggles and suffering that came to him only unfolded the great, tender,' loving spirit within him; thus while "singing the songs of the lowly" he was unconsciously developing his own nature and gaining for himself a name, an immortality that should mark an epoch in the evolution, not only of art, but of all that is good, true, and beautiful. 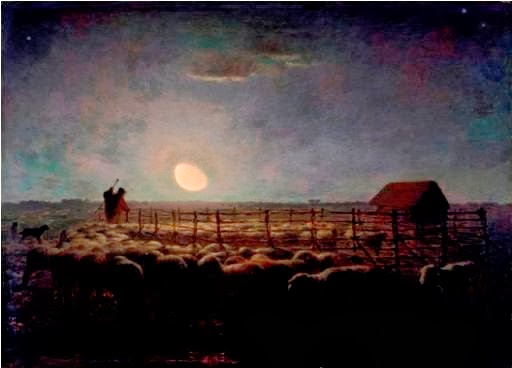 "In the picture we have an effect of moonlight which we may have often seen, but which most of us would find it impossible to show on paper or canvas. If we examine the picture carefully we shall see that there is not very much drawing in it. Even the flock of sheep, which is the most important part of the picture, does not seem to have any very definite shape.  It is only when we begin to look at it very carefully that we see how the artist has created something very true and very real out of almost nothing. Things begin to take shape as we look more closely, just as they do at night.

If we took at the sky first, we will notice that the moon is not sharply and clearly defined, nor is it white. Next we notice that it is not round – in other words, it is not full moon.  We also see it has a halo round it, but it is so delicate and so faint that we can just see it and no more. Notice the patches of cloud in the sky; some are silver edged, and some without any light striking on them.
The hut, the sheep-pen, the man, the sheep and the dog, are all ghostly. We can see the moonlight streaming over the backs of the sheep, but we cannot see very clearly where their legs end or if they have any feet. The natural colors of grass, sheep's wool, and almost everything else have disappeared in moonlight. Only an artist like Millet could have painted such a picture and got such an effect as this."

"Here you have silence painted, perhaps as never expressed before. In this little moonlight you have a simple flat plain and a pen or sheepfold, made of slender poles. Beside the gate stands the shepherd; beside him his faithful dogs. Moving around and toward the fold, is a herd of sheep huddled closely together, while just above the horizon hangs the waning moon.

Into this little picture there is painted such a great sense of vastness that you lose all thoughts of dimensions and feel the real depth and breadth of nature. The whole scene is pervaded with an air of repose, a stillness that is filled with mystery, heightened by the manner in which the sheep huddle together as if some awful sound should break the stillness. That they sense the feeling of solitude, you cannot help but feel.  As you look at the sky you are seeing into endless space.

The moon is so luminous and surrounded by such a wonderful light that you fall into the prevailing sentiment of the picture and are transported to the place to become a part of the scene. You feel the moon coming forward in full relief and then gradually sinking back into the far distance, so softly, so tenderly, so lovingly that you are entranced by its beauty.

The tone of the picture is of a bluish, silvery, purplish hue. The outlines are very indefinitely, very tenderly, let into the background, yet everything has a firmness and solidity that could not be surpassed.  The light from the moon throws long, mysterious shadows across the ground indescribable in effect.

There is always something wonderful in the color of the little touches of shadow that you find in Millet's landscapes -- a mouldy purple, but a very subdued one. This, too, is a picture that speaks to the inner senses as well as to the material sight.

Millet saw and felt the beauty that existed unappreciated in the humble life about him. To him the humble life was full of the grand poetry of humanity. To paint this and compel the world to acknowledge it was his mission."

[from "The Sheepfold" by Millet J F, in Walters Collection, Baltimore – Author:Gruelle R B]

Click on boldface headings respectively for the Slide Show and Complete Works.

I invite your special attention to The Angelus [Catholic sunset prayer at sound of bell].

Posted by Raghunathan Srinivasan at 22:24