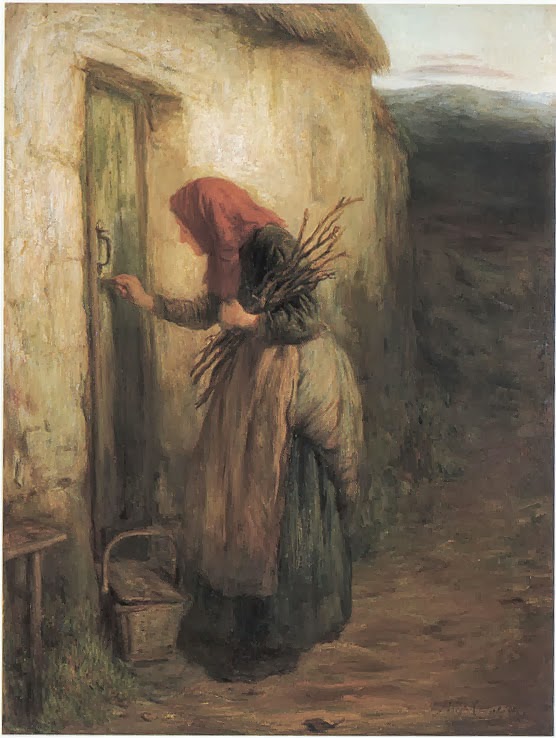 [During the 1870s, Hugh Cameron [1837-1918] produced a number of paintings depicting Scottish country people engaged in hard farm tasks, or collecting and dragging firewood. Several of these compositions suggest the influence of Jean François Millet's scenes of peasant life. First exhibited in 1873, this picture was painted for Cameron's friend, John McGavin who was also a discerning collector of Corot and Millet.]

You will probably agree that the title of this picture “A Lonely Life” describes it very aptly. Here we see an old woman returning to her cottage at the end of the day. In one arm she carries a bundle of sticks which she has gathered on her way home, and which she will use for her evening fire.  She has set down her provision basket at her feet while she unlocks her door. There is no one to welcome her on her return-not even a dog or a cat to bark or purr when she appears in sight: truly “a lonely life.”

The arrangement or composition of the picture and its painting are as simple as the subject itself. Consider how little there is in the picture: a humble old woman and part of the outside of her poor cottage, with a little bit of sky and distant hill; and yet the painting tells its story fully and effectively.

The artist might have put many other appropriate things into his picture, such as a garden, or trees, or even other houses. Do you think that those things which might have been quite natural in such a scene would have helped him in telling his story of "a lonely life"?

The artist has put in only what was absolutely necessary, and this helps to create the feeling of loneliness, and to arouse our pity for the old woman, just as Andersen rouses our pity for the little match girl in the sad but beautiful story.

Let us notice carefully how he has treated the few items of his picture! Instead of making the different parts stand out clearly and separately from each other, he has blended them together in a wonderful way. Only the old woman's head and hands stand out clearly against the light colour of the cottage wall; all the rest of the picture is shadowy and indistinct except the distant hill crowned with a rosy cloud.

The upper part of the picture is mostly light, the lower part mostly dark. We can just see the lower part of the woman's figure, the basket, and the edge of the seat against the cottage wall, and we must imagine the road in front of the cottage, which disappears into the dark distance. See how soft and tender the painting of the picture is. There are no hard, sharp, precise outlines anywhere-everything is soft and mysterious.

There is a small window suggested at the right side of the cottage wall, and we cannot tell where the house ends and the landscape background begins. This is not carelessness on the part of the artist, but part of his plan. The painter has used only a very few colours in painting his picture - brown and grey of light and dark tones being the principal ones. He has, however, used a dull red for the woman's shawl, dull green for her skirt, and a brighter green for the cottage door.

This picture shows us that a true artist is not only a good painter, but also, like Andersen,a sympathetic story-teller.  He is not so much concerned to show us how clever he is with palette and brush, as to present before us the chosen incident in such a way as to rouse our interest and sympathy.  When we look at his picture we forget about the means which the artist employed to make it, and think only with deep sympathy of the poor old woman who lives such “a lonely life.”

Posted by Raghunathan Srinivasan at 21:41