INSPIRATIONAL STORY: WHEN YOU HAVE A LEMON, MAKE LEMONADE

2013-30  Inspirational Story:  When you have a lemon, make lemonade 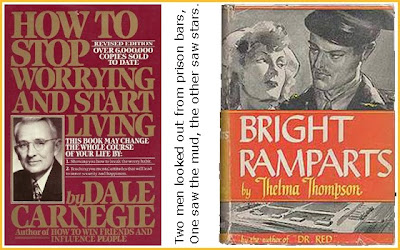 Dale Carnegie: While writing the book "How to Stop Worrying", I dropped in one day at the University of Chicago and asked the Chancellor, Robert Maynard Hutchins, how he kept from worrying. He replied: "I have always tried to follow a bit of advice given me by the late Julius Rosenwald, President of Sears, Roebuck and Company: 'When you have a lemon, make lemonade.' "

After spending a lifetime studying people and their hidden reserves of power, the great psychologist, Alfred Adler, declared that one of the wonder-filled characteristics of human beings is "their power to turn a minus into a plus."

Here is an interesting and stimulating story of a woman I know who did just that. Her name is Thelma Thompson, and she lives at 100 Morningside Drive, New York City. "During the war," she said, as she told me of her experience, "during the war, my husband was stationed at an Army training camp near the Mojave Desert, in New Mexico. I went to live there in order to be near him. I hated the place. I loathed it. I had never before been so miserable. My husband was ordered out on maneuvers in the Mojave Desert, and I was left in a tiny shack alone. The heat was unbearable-125 degrees in the shade of a cactus. Not a soul to talk to but Mexicans and Indians, and they couldn't speak English. The wind blew incessantly, and all the food I ate, and the very air I breathed, were filled with sand, sand, sand!

"I was so utterly wretched, so sorry for myself, that I wrote to my parents. I told them I was giving up and coming back home. I said I couldn't stand it one minute longer. I would rather be in jail! My father answered my letter with just two lines-two lines that will always sing in my memory-two lines that completely altered my life:

Two men looked out from prison bars,
One saw the mud, the other saw stars.

"I read those two lines over and over. I was ashamed of myself. I made up my mind I would find out what was good in my present situation. I would look for the stars.

"I made friends with the natives, and their reaction amazed me. When I showed interest in their weaving and pottery, they gave me presents of their favourite pieces which they had refused to sell to tourists. I studied the fascinating forms of the cactus and the yuccas and the Joshua trees. I learned about prairie dogs, watched for the desert sunsets, and hunted for seashells that had been left there millions of years ago when the sands of the desert had been an ocean floor.

"What brought about this astonishing change in me? The Mojave Desert hadn't changed. The Indians hadn't changed. But I had. I had changed my attitude of mind. And by doing so, I transformed a wretched experience into the most exciting adventure of my life. I was stimulated and excited by this new world that I had discovered. I was so excited I wrote a book about it-a novel that was published under the title Bright Ramparts. ... I had looked out of my self-created prison and found the stars."
Posted by Raghunathan Srinivasan at 19:02