The woman was old and ragged and gray
And bent with the chill of the Winter's day.

The street was wet with a recent snow
And the woman's feet were aged and slow.

She stood at the crossing and waited long,
Alone, uncared for, amid the throng

Of human beings who passed her by
Nor heeded the glance of her anxious eyes.

Down the street, with laughter and shout,
Glad in the freedom of "school let out,"

Came the boys like a flock of sheep,
Hailing the snow piled white and deep.

Past the woman so old and gray
Hastened the children on their way.

Nor offered a helping hand to her —
So meek, so timid, afraid to stir

Lest the carriage wheels or the horses' feet
Should crowd her down in the slippery street.

At last came one of the merry troop,
The gayest laddie of all the group: 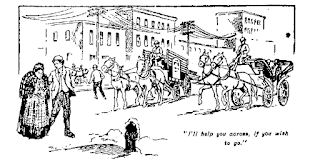 He paused beside her and whispered low,
"I'll help you cross, if you wish to go."

Her aged hand on his strong young arm
She placed, and so, without hurt or harm,

He guided the trembling feet along,
Proud that his own were firm and strong.

Then back again to his friends he went,
His young heart happy and well content.


"She's somebody's mother, boys, you know,
For all she's aged and poor and slow.

"And I hope some fellow will lend a hand
To help my mother, you understand,

"If ever she's poor and old and gray,
When her own dear boy is far away."

And "somebody's mother" bowed low her head
In her home that night, and the prayer she said

Was "God be kind to the noble boy,
Who is somebody's son, and pride and joy!"