When it comes to understanding the meaning of Sanatana-dharmah, we have to be aware of its Sanskrit definition. The root of the word dharmah धर्मः  is dhri धृ , which means to uphold or sustain. Dharmah is that which upholds. Dharmah is also the force which maintains the universe. Where there is dharma there is harmony and balance individually and socially.

If we live on the basis of lust and greed, to accumulate possessions, money, and sensual pleasure by the demands of the mind and senses, it will become most difficult to follow the path of dharma. Doing what should not be done is called adharmah. The conclusion is that if we want happiness and peace we must learn how to live according to the path of dharma.

Dharmah also means righteous conduct. This includes following social laws and proper moral activity and behavior. It encourages truthfulness of thought, word and deed. Dharmah also means truth. So we follow the path of dharma to free ourselves from illusion and reach the ultimate Truth, which is the topmost reality, the spiritual strata.

The more society chooses to follow the path of dharma, the more easily we can attain an existence of cooperation and harmony instead of one of wars, conflict, terror and killing. So whatever we do, even if it is doing business, making money, politics, etc., it should be done on the basis of dharma. Then things will progress in the proper way.

Following dharma will bring both material well-being as well as final liberation from material existence. Thus, one can attain all that this world can offer through the path of dharma. On a national, ethnic, or racial level, dharma is an instrument of unity, not divisiveness. That which helps unite everyone and develop love and universal brotherhood is dharma.

So we can see that the path of dharma is more of a way of life. It is a way of life that is lived with every moment and every breath. It is a matter of raising our consciousness to the highest level possible. It is a matter of understanding and living according to the Universal Spiritual principles that apply to everyone. Thus, we reach our fullest potential, which in the end is on the spiritual platform.

Sanatana-dharma also means the eternal path and our eternal nature. Dharma means the ultimate nature of the living being, the spirit, the soul. And the nature or dharma of the soul is to love and be loved, to serve its most lovable object and to receive love. The dharma of fire is to give light and heat. If it does not do that, then it cannot be fire.

Sanatana-dharma or eternal nature of the soul is that it is a spiritual being that is naturally connected to God and feels the greatest joy in its constitutional position as a servant of God. The soul needs to love. It cannot do without it.

Sanatana-dharma means both the ultimate spiritual truth and the means to attain it. Sanatana-dharma is also a matter of understanding. It is an awareness that every particle of this universe is an expansion of God’s energies. Dharma is the path to seeing how God is everywhere. Thus, dharma is not only the path to God but is also in God.

Sanatana-dharma is the basis of universal truth. It can be applied to anyone at anytime and anywhere in the universe. It does not matter in which religion you may be affiliated, you can still benefit and grow within the fold of Sanatana-dharma to reach a higher awareness and perception of your true potential and genuine spiritual identity.

Stephen Knapp And His Books on Spirituality, Vedic Culture
and Eastern Philosophy 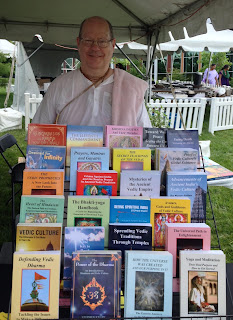