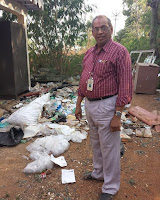 Rajagopalan Vasudevan is an Indian scientist who has worked mainly in waste management. He developed an innovative method to reuse plastic waste to construct better, more durable and very cost-effective roads. This method will help in making roads much faster and also will save environment form dangerous plastic waste. The roads also show greater resistance to damages caused by heavy rains. His road construction method is now widely used to construct roads in rural India. He obtained his B.Sc, M.Sc and Ph.D degrees from the Madras University and in 1975, joined Thiagarajar College of Engineering, Madurai where he is currently the Dean, ECA. His research mainly deals with waste management specifically use of waste plastics for road construction.

With approx. 9 million metric tons of plastic garbage being shoved into the world's streams and inadequate waste management, it is tough to say whether plastics were actually a boon. This talk presents a low cost disruptive technology to convert plastic waste of any kind into paved roads that are twice as strong, are waterproof, last up to 60 years and have almost zero maintenance cost. This technology will go a long way in curbing the plastic pollution of the world if implemented diligently.

Dr R Vasudevan is fondly called the 'Plastic Man of India'. He has patented a technique to convert common waste plastic litter into a coating for bitumen - the main component in asphalt – used for the construction of roads.

This talk was given at a TEDx event using the TED conference format but independently organized by a local community. Learn more at http://ted.com/tedx 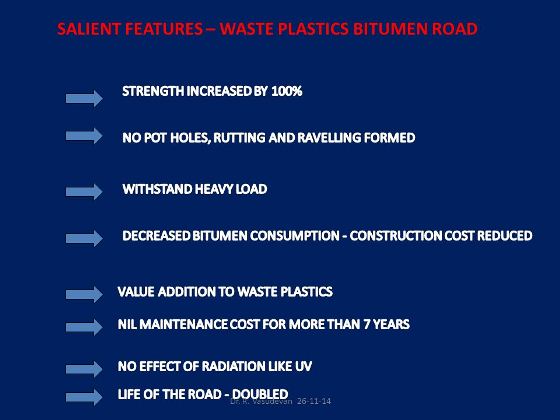 The gravel is heated at 170 degrees C and shredded plastic sprayed over the hot stone aggregate. The plastic instantly melts and coats the gravel without releasing toxic gases into the atmosphere. Immediately, bitumen heated at 160 degree C is mixed at 155 degrees C and used for laying the road. Molten plastic with liquid tar has proven to be more resistant to water permeation, heat and high pressure than the normal mixture of stone aggregate and bitumen, without the plastic.

Dr. R. Vasudevan, Dean and Head of the Chemistry Department, Thiagarajar Collefe of Engineering, Madurai, India, is better known as a man with a mission, and “Clean India” is his campaign. After a decade's hard work and persistent efforts, his simple invention of a technology to use plastic waste to lay roads, patented by TCE, finally got a shot in the arm with the Centre approving its wider application.

When Dr. A.P.J. Kalam visited TCE in 2001, the professor presented his project on the good bonding and binding factor of plastic and its potential use as a coating over pebbles for laying roads. He recalls with a gentle smile, “he told me, one day your test will become the convention. Don't worry if people don't approve or get convinced. You just do your work at your place. As a sample, lay a plastic road within your campus first. Once the results are there to see, people will come automatically.”

Dr. Kalam's words proved prophetic. With full support from the college correspondent Mr. Karumuttu T. Kannan, Dr. Vasudevan laid the first 60-feet-long plastic road within the campus. “Application of knowledge is very important,” he says. “We learn and know so many things but on most occasions fail to see how and where our knowledge could be implemented. That is wisdom.”

Getting his technology patented was the next hurdle. After four years and numerous visits to the Chennai office, the technology was registered in 2006. “An officer advised me that I should not apply for the product's patent because it is not new, the road is already there. Instead, I should patent the process,” he says. “God has always sent the right people to me at the right time.”

Though plastic waste has been a nagging problem for civic authorities, with thousands of tonnes of garbage generated every day, it took years of discussion for Dr. Vasudevan to be acknowledged by organizations like the Central Pollution Control Board, National Rural Roads Development Agency, Central Road Research Institute, Indian Centre for Plastic Environment and the National Highways Authority of India. In every forum, he painstakingly explained and demonstrated the benefits of road laying using a polymer-aggregate-bitumen mix.

Even as his technology was being debated in the government, Dr. Vasudevan started receiving offers from private companies both within and outside the country to sell the patent. “But I think it my duty to serve my country first and therefore, I gave it free to the Indian Government.” What he laments is the slow progress, “the plastic binding with bitumen is an ideal option for roads that bear the brunt of torrential rains.” Also, he underlines, if citizens treat their waste properly by segregating and collecting the plastic, the country will soon be free of plastic litter and boast safer and better roads.

His department is now evolving a cold process technology as well. The Department of Science and Technology has sanctioned a ‘green chemistry' project at TCE for producing a 'cold emulsion' to coat the aggregate instead of using hot bitumen. Such a process would be highly useful in laying roads in cold regions. Widener University, Philadelphia, has already shown interest in the cold process.

With a low-cost technology that finds a ready solution for plastic waste management, Dr. Vasudevan's invention undoubtedly offers a lesson for all municipal corporations. “It serves the twin purpose of increasing quality of roads and also solves the problem of plastic disposal. The vision should be to eventually replace all existing roads and lay every new road with this technology,” says the professor.