If you happen to be in the densely vegetated area of Betul and Hoshangabad districts in Madhya Pradesh, you are likely to stumble upon an unassuming old man with a scraggly white beard, quietly making his way through the wilderness on his bicycle. He goes by the name Alok Sagar and was once a resident of New Delhi. For the last 34 years [in 2016] however, this man has been working untiringly for the betterment of tribals in Madhya Pradesh. Sagar has single-handedly planted more than 50,000 trees in Betul district. The eco-conscious citizen also spreads his message of a greener world by collecting and distributing seeds among the tribals.
Over the last three decades, none had any idea of this great man. He was just another rights activist for the people of that area. No one would ever know of the great mind in their midst, had it not been the Betul district administrator, who asked him to leave the area citing the security reasons during a by-election. It was only then that Alok Sagar revealed his true identity which completely shocked every police officer present there.
He is a son of an IRS officer father and a physics professor mother. Moreover, he himself had a degree of M.Tech from IIT-Delhi in 1973. Adding to his educational excellence, he has a PhD from Houston University in Texas and a post doctorate in dental science from Texas university, following a fellow of sociology department at Dalhousie university of Canada.
After resigning from his post of professor at IIT Delhi in 1982, Sagar started working for tribals in the Betul and Hoshangabad districts of Madhya Pradesh. Since then, he has been living in Kochamu, a remote village with 750 tribals, lacking both electricity and roads, and with just a primary school where he teaches tribal children. Sagar believes that people can serve the country better by working at the grassroots level.

What makes Sagar's story truly inspiring is his simplicity. He owns just three sets of kurtas and a cycle, and spends his day collecting and distributing seeds among tribals. Sagar can speak many languages and dialects used by tribals in the region. Closely associated with the Shramik Adiwasi Sangathan, he spends most of his time working for their upliftment. 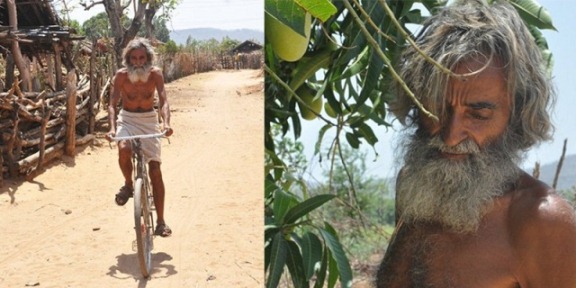