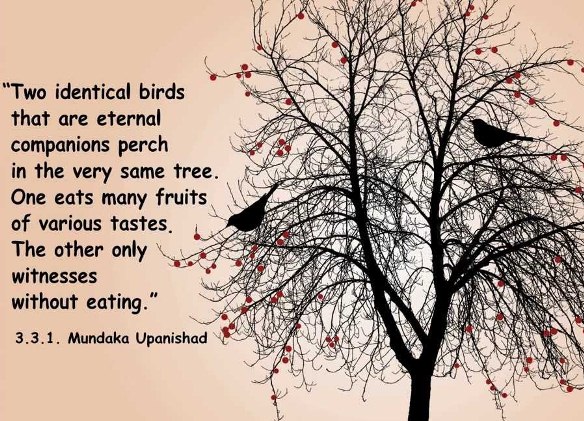 Mantra No. 1: Two birds living together, each the friend of the other, perch upon the same tree. Of these two, one eats the sweet fruit of the tree, but the other simply looks on without eating.

The two birds are the Jiva and Isvara, both existing in an individual compared to a tree. Both the Jiva and Isvara have a common substratum which is Brahman and which is the reality of both. The body is compared to a tree because it can be cut down like a tree. This tree is also called the Kshetra or the field of manifestation and action of the Kshetrajna or the knower of the field.

It is the Jiva that is affected by Avidya, Kama and Karma. Because of the conjunction of consciousness with these limiting factors, it has to experience the results of its actions; but Isvara, who is not limited to any adjunct, has no actions whatsoever to perform, and so, no experience of the results of actions.

Relative experience is the effect of the presence of Rajas, but the character of Isvara is Sattva and, hence, there is no phenomenal experience for Him. He is in fact the director of both the agent of actions and the results of actions. Isvara’s activity consists in His mere existence.

Mantra No. 2: In the self-same tree the individual (bird) is drowned in grief because of delusion and impotency. When it beholds the other (bird), viz., the adorable Lord, it realises its own glory and gets freed from sorrow.

The grief of the Jiva is the result of its inability to live in conformity with the forms of the effects of unwise actions done in the past. Such thoughtless actions, no doubt, lead to their corresponding results and as they are not in tune with the law of Truth, they torment the individual in the form of unpleasant experiences.

Mantra No. 3: When the knowing individual has the vision of the intelligent creator, the Lord, the Purusha, the Brahman which is the source of all, then it shakes off both merit and demerit, and having become taintless, attains to supreme equality with the Lord.

In this Mantra, the Lord is designated as having a golden hue, which means that His nature of Knowledge is eternally inherent in Him even as the colour of gold is something inherent in it. It points to the self-luminous nature of God. To the individual is attributed the quality of knowingness which is the knowledge of the Supreme Being achieved after acquisition of the power of correct discrimination.

Divine knowledge is free from the conception of good and bad, because this knowledge is non-relative. It is an all-consuming wisdom in which relative natures or conceptions can have no value. Distinctions like virtue, vice, good, bad, high, low, etc., are made only as long as the all-comprehensive knowledge, which underlies all these distinctions, is not realised.

Two Birds on a Tree Metaphor explained by Swami Vivekananda: 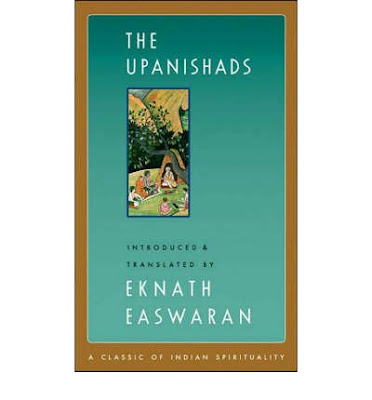