DALE CARNEGIE: HOW TO WIN FRIENDS

Dale Carnegie was born in 1888, Maryville, Missouri, USA and was educated at Warrensburg State Teachers College. As a salesman and aspiring actor, he traveled to New York and began taking 'public-speaking' classes for adults at the YMCA.

In 1912, the world famous Carnegie Course in Effective Speaking and Human Relations was born. He authored several bestsellers, including, “How to Win Friends and Influence People”, and “How to Stop Worrying and Start Living.” Over 50 million copies of Mr. Carnegie's books have been printed and published in scores of languages. 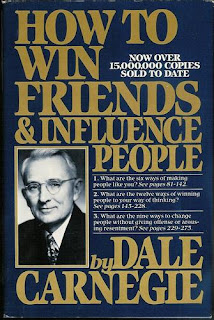 
Part 1: Fundamental Techniques in Handling People
Part 2: Six Ways to Make People Like You
Part 3: How to Win People to Your Way of Thinking
Part 4: Be a Leader – How to Change People without Arousing Resentment.

Dale Carnegie's Summary of "How to Wind Friends and Influence People":


01 Don't criticize, condemn or complain.
02 Give honest and sincere appreciation.
03 Arouse in the other person an eager want.

04 Become genuinely interested in other people.
05 Smile.
06 Address a person by his personal name.
07 Be a good listener.
08 Talk in terms of the other person's interests.
09 Make the other person feel important, sincerely.

Part 3   Win people to your way of thinking

Part 4   Be a Leader: How to Change People Without Arousing Resentment
22 Begin with praise and honest appreciation.
23 Call attention to people's mistakes indirectly.
24 Talk about your own mistakes before criticizing the other person.
25 Ask questions instead of giving direct orders.
26 Let the other person save face.
27 Be "hearty in your approbation and lavish in your praise."
28 Give the other person a fine reputation to live up to.
29 Use encouragement. Make the fault seem easy to correct.
30 Make the other person happy about doing the thing you suggest.

The above 30 principles have some overlaps as they are given under four headings. Among these, 10 principles of my choice are shown in red. 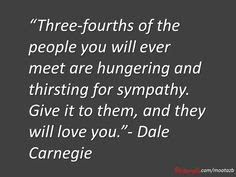