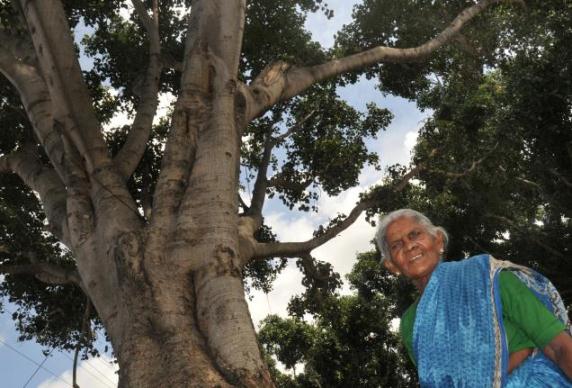 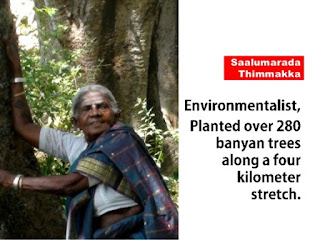 Thimmakka, is a native of Hulikal village of Bangalore Rural district in Karnataka. From an early age she worked as a laborer in a quarry near her home. She was married off to Chikkaiah, a cattle herder. The couple wanted children but were unable to get any even after 25 years of their married life.
One day the husband-wife duo decided to plant trees to overcome the sadness and empty feeling of their lives. That was around 50 years ago. From there started a journey of untiring love and selfless service of an ordinary couple towards an extra ordinary mission: a mission to raise as many trees as possible with love and care and as their own children.

They started grafting saplings from Ficus (banyan) trees as there were plenty of Ficus trees near their village. They grafted ten saplings in the first year and planted them along a stretch of 4 kilometers on the road that led to Kudur, the next village. They increased the number to 15 in the next year. They continued with their efforts and increased the number of saplings with each passing year.

They not only planted but also tended to the young saplings. Each morning they started from their home with four pots filled with water and watered the saplings. They also protected the saplings from the grazing cattle by fencing them with thorny shrubs. Their tireless efforts began to bear fruit when the saplings grew into large and strong trees.
The couple planted the saplings mostly in the monsoon season so that the plants would get the rain water for their growth. The couple planted around 300 trees in total and today the asset value of the trees stands at more than 1.5 million rupees. Thimmakka’s husband passed away in 1991 but she continued with her mission alone and undaunted. The Government of Karnataka has taken over the management of the trees now.
Thimmakka was referred to as Saalumarada Timmakka after her work got popular among the people. Salumarada means the row of trees in Kannada language. She was given the name to honor her dedication towards planting the saplings and preserving the environment despite the numerous hardships that she and her husband had to face along the way. 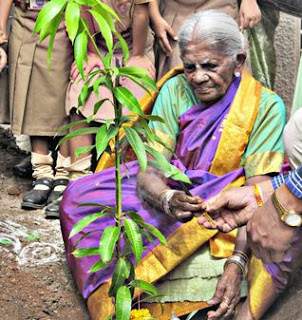