Louis Bromfield [1896-1956] was an American author and conservationist who gained international recognition, writing eloquently about rural life and sustainable agriculture. In 1924, his first novel, "The Green Bay Tree", won instant acclaim. He won the 1927 Pulitzer Prize for his best novel Early Autumn. All of his 30 books were best-sellers, and many, such as The Rains Came, were made into successful motion pictures.

"My Ninety Acres"
I had a friend, old Walter, who lived in Possum Run Valley on a farm known as "My Ninety Acres." Years ago when Walter Oakes was young, everybody used to speak of "My Ninety Acres" with a half-mocking, half-affectionate smile, because Walter always talked as if it were a ranch of many thousand acres or a whole empire.  But as time passed the mockery went out and "My Ninety Acres" became simply the name of the farm.

Old Walter had a right to speak of it with pride.  It wasn't a bright new place, but the small white house with its green shutters looked prosperous, the huge fire-red barn was magnificent, and there were no finer cattle in the whole county.

The place had a wild natural beauty.  The patches of lawn were kept neatly mowed but surrounding them grew a jungle of old-fashioned flowers and shrubs.  Beyond the neat vegetable garden the romantic shagginess continued. The wire along the fence rows was hidden beneath sassafras and elderberry and wild black raspberry.  The place was shaggy not because Walter was lazy - there was no more hard-working man in the whole Valley - but because Walter wanted it like that, Walter and Nellie.

I never saw Nellie Oakes, but my father told me she had been the prettiest girl in the Valley.  She taught school until, at 22, she married Walter.  People wondered why she chose Walter, who had only 90 acres of poor hill land he had just bought, when she could have had any catch of the Valley.  But I know from all the long story it was simply because she loved him.

Nellie died when her second son, Robert, was born.  But sometimes when my father and I walked about the fields of "My Ninety Acres" with Walter and his boys, I wasn't at all sure she wasn't there, enjoying the beauty and richness as much as Walter himself.  "Nellie wanted me to put this field into pasture but we couldn't afford not to use it for row crops," he would say, or, "It's funny how many good ideas a woman can have about farming. Now, Nellie always said . . . "Sometimes I'd return to the house almost believing that I would find there the Nellie who was dead before I was born, waiting with a good supper ready.

Walter never married again, though a good many widows and spinsters set their caps for him.  He didn't leave "My Ninety Acres" save to go into town or to church on Sunday with the boys, John and Robert.

I tramped over the hills to "My Ninety Acres"  [after 25 years]. As I came down the long hill above the farm I thought, "This is the most beautiful farm in America."  It was June and the herd of fat cattle stood knee-deep in alfalfa, watching me.  The corn was waist-high and vigorous and green, the oats thick and strong, the wheat already turning a golden-yellow.

As I went down toward the creek I saw old Walter with two sheep dogs moving along a fence row.  I stood for a moment, watching.  The old man would walk a little way, stop, part the bushes, and peer into the tangled sassafras and elderberry.  Once he got down on his knees and for a long time disappeared completely.

Finally, the barking of the dogs as they came toward me attracted his attention.  He stopped and peered, shading his eyes. "I know," he said, holding out his hand, "you're Charlie Bromfield's boy." I said I'd been trying to get over to see him and then he asked, "And your father?  How's he?"

I told him my father was dead.  "I'm sorry," he said, very casually as if the fact of death was nothing.  "I hadn't heard.  I don't get around much."  Then suddenly he seemed to realize that I must have seen him dodging in and out of the fence row.  A faint tinge of color came into his face.  "I was just snoopin' around 'My Ninety Acres.'  Nellie always said a farm could teach you more than you could teach it, if you just kept your eyes open....  Nellie was my wife."

Then he said, "Come and I'll show you something."

I followed him along the fence row and presently he knelt and parted the bushes.  "Look!" he said, and his voice grew suddenly warm.  "Look at the little devils."

I could see nothing but dried brown leaves and a few delicate fern fronds.  Old Walter chuckled.  "Can't see 'em, can you? Look, by that hole in the stump."

They sat in a little circle in a nest, none of them much bigger than the end of one of old Walter's big thumbs-seven tiny quail.  They never moved a feather.

Old Walter stood up.  "They used to laugh at me for letting the bushes grow up in my fence rows."  He chuckled.  "Last year Henry Talbot lost ten acres of corn all taken by chinch bugs.  Henry doesn't leave enough cover along his fence rows for a grasshopper.  He thinks that's good farming!"  He chuckled again.  "When the chinch bugs come along to eat up my corn, these little fellows will take care of 'em."

We were walking now toward the house.  "Nellie had that idea about lettin' fence rows grow up.  I didn't believe her at first.  But I always found out that she was pretty right about farmin'."

At the house, old Walter said, "Come in and we'll have a glass of buttermilk.  It's cooler in the sittin' room."  The buttermilk was such as I had not tasted in 30 years - creamy, icy cold with little flakes of butter in it. "You're living here alone?" I asked. "Yes."

I started to say something and then held my tongue, but old Walter divined what I meant to ask.  "No.  It ain't lonely.  Nellie used to say she didn't understand the talk of these women who said they got lonely on a farm.  Nellie said there was always calves and horses and dogs and lambs and pigs and that their company was about as good as most of them women who talked that way."

The Sunday afternoon visits to "My Ninety Acres" became a habit, for I found that old Walter knew more of the fundamentals of soil, of crops, of livestock than any man I have ever known.  We were not always alone on those Sunday walks because neighbors and even farmers from a great distance came sometimes to see Walter's farm and hear him talk about it.  As he told the history of this field or that one, and what he had learned from each, a kind of fire would come into the blue eyes.

One day Robert came on his annual visit, and drove over to see if I could help persuade the old man to retire.  "He's 75 now and I'm afraid something will happen to him alone there in the house or barn.  But he's stubborn as a mule and won't quit.  "This morning he was up at daylight and husking corn in the bottom field by seven o'clock."

We were both silent for a time sitting on the porch overlooking the Valley.  The green winter wheat was springing into life in the fields beyond the bottom pasture where the Guernseys moved slowly across the blue grass.  "Honestly, Bob," I said, "I don't see why we should do anything, He's happy, he's tough as nails, and he loves that place like a woman." Then, hesitantly, I said, "Besides, Nellie is always there looking after him."

A startled look came into the son's eyes.  "Do you feel that way too?"

I said, "Nellie is everywhere in that 'Ninety Acres.'  She's out there husking corn with him now."

"It's the damnedest thing," Robert said.  "Sometimes I think the old gentleman gets Nellie and the 'Ninety Acres' a little mixed up."

We finally agreed that there wasn't anything to be done.  I said I'd keep my eye on old Walter.  And so every day for two years I, or somebody from the place, went over.

One Sunday afternoon in early September he and I were walking alone through one of his cornfields.  It was fine corn, and as we came near the end of a long row, he stopped before a mighty single stalk which had two huge nearly ripened ears and a third smaller one.  Old Walter stopped and regarded it with a glowing look in his blue eyes.

"Look at that," he said.  "Ain't it beautiful? That's your hybrid stuff." His hands ran over the stalk, the leaves and the ears.  "I wish Nellie could have seen this hybrid corn.  She wouldn't have believed it."

As I watched the big work-worn hand on the stalk of corn, I understood suddenly the whole story of Walter and Nellie and the ninety acres.  The rough hand that caressed that corn was the hand of a lover.  It was a hand that had caressed a woman who had been loved as few women have been loved, so deeply and tenderly that there could never have been another woman to take her place.  I knew now what Robert's remark about Nellie and the ninety acres getting mixed up had meant.

It happened at last.  I went over one afternoon and when I could not find old Walter or the dogs anywhere I returned to the house.  I heard scratching and whining in the ground-floor bedroom, and when I opened the door one of the sheep dogs came toward me.  The other dog lay on the hooked rug beside the bed, his head between his paws.  On the bed lay old Walter.  He had died quietly while he was asleep.

Walter was buried beside Nellie in the Valley churchyard.

Robert wouldn't sell "My Ninety Acres." I undertook to farm it for him, and one of our men went there to live.  But it will never be farmed as old Walter farmed it.  There isn't anybody who will ever farm that earth again as if it were the only woman he ever loved. 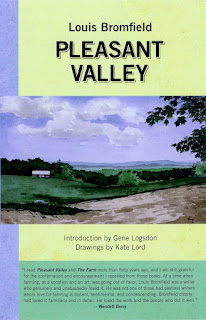