PARABLES OF RAMA: THE HOLY SHADOW - GIVE, FORGIVE 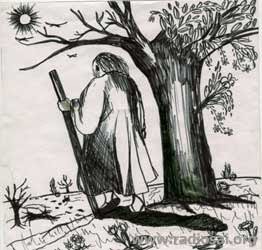 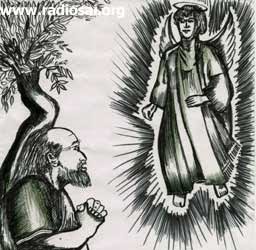 “Higher and still higher
From the earth thou springest
Like a cloud of fire;
The deep blue thou wingest
And singing still dost soar,
And soaring ever singest.”


THE HOLY SHADOW
[Translated from French by Rath Craft]

LONG, long ago there lived a saint so good that the astonished angels came down from the Heaven to see bow a mortal could be so godly.

He simply went about his daily life, diffusing virtue, as the star diffuses light and the flower perfume, without even being aware of it.

Two words summed up his day: he gave, he forgave.

Yet these words never fell from his lips. They were expressed in his ready smile, his kindness, forbearance, and charity.

The angels said to God  ―O Lord, grant him the gift of miracles.

God replied: ―I consent; ask what he wishes.

So they said to the saint: ―Should you like the touch of your hands to heal the sick? ―

―No, answered the saint, ―I would rather God should do that.

―Should you like to convert guilty souls and bring back wandering hearts to the right path? ―

―No: that is the mission of angels. I pray, I do not convert.

―Should you like to become a model of patience attracting men by the lustre of your virtues, and thus glorifying God?

―No, replied the saint, ―if men should be attracted to me, they would become estranged from God. The Lord has other means of glorifying himself.

―What do you desire then? ―cried the angels.
―What can I wish for? ―asked the saint smiling.

―That God give me His grace; with that, should I not have everything? ―

But the angels wished: ―You must ask for a miracle, or one will be forced upon you.

―Very well, said the saint, ―that I may do a great deal of good, without ever knowing it.

The angels were greatly perplexed. They took counsel together and resolved upon the following plan: Every time the saint's shadow should fall behind him, or at either side, so that he could not see it, it should have the power to cure disease, soothe pain, and comfort sorrow.

And so it came to pass: when the saint walked along, his shadow, thrown on the ground on either side or behind him, it made arid paths green, caused withered plants to bloom, gave clear water to dried up brooks, fresh colour to pale little children, and joy to unhappy mothers.

But the saint simply went about his daily life, diffusing virtue as the star diffuses light and the flower perfume, without even being aware of it.

And the people respecting his humility, followed him silently, never speaking to him about his miracles. Little by little, they came even to forget his name, and called him only ―The Holy Shadow.


MORAL: One who rises above all desires is always diffusing good as spontaneously and naturally as a flower gives perfume, or a star diffuses light, without even being aware of it.


Posted by Raghunathan Srinivasan at 06:00