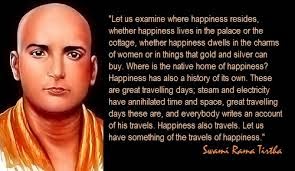 
My own Self in the form of ladies and gentlemen,

Rama does not blame European or Christian nations for their cohorts and armies to conquer other nations; that is also a stage in the spiritual development of a nation, which is at one time necessary. India had to pass through that stage; but India being a very old nation had weighed the riches of the world in the balance and found them wanting; and the same will be the experience of these nations that are in these days for accumulating worldly prosperity and riches.

Why are all these nations trying to march cohorts to conquer other nations? What do they seek in all that? The only thing sought is happiness, joy, pleasure. It is true that some people say they do not seek happiness but knowledge. Others say that they seek not happiness; they seek action. That is all very good; but examine the hearts and minds of average men, or of ordinary mortals. You will find that the ultimate goal which they all set before them, the ultimate goal they all seek directly or indirectly, consciously or unconsciously, is happiness, nothing but happiness.

Let us examine this evening where happiness resides, whether happiness lives in the palace or the cottage, whether happiness dwells in the charms of women or in things that gold and silver can buy. Where is the native home of happiness? Happiness has also a history of its own. These are great travelling days; steam and electricity have annihilated time and space, great travelling days these are, and everybody writes an account of his travels. Happiness also travels. Let us have something of the travels of happiness.

We start with the first glimpse of happiness that a child has in his infancy. All the happiness in this world is for the child located in the skirt of the mother, or in the bosom of the dear mother. All the happiness is located there. This is the first stage on the main road which happiness has to travel along, the mother’s skirt, the mother’s bosom, say. To the infant there is nothing in this world which brings happiness so much as the mother’s bosom. The child hides his face behind the skirts of the mother and there he says, "Look! Look! Find me out! Where am I?" and he laughs heartily. He laughs with all his heart and soul. Books are meaningless to the child; treasures are useless to him. Fruits and sweets have no taste for the child that has not yet been weaned. The whole world of pleasure is, for the child, concentrated there.

A year passes and the happiness of the child changes its centre; it moves on to some thing else. The residence of happiness now becomes the toys, the beautiful toys, pollies and dollies. In the second state, the child does not like the mother so much as he likes his own toys. Sometimes the child quarrels with the dear, dear mother, for the sake of toys, for the sake of dollies.

A few months or years more and no more is his happiness in the pollies and dollies; it has shifted its centre again, it is no longer located in these things. In the third stage, when the child grows up to be a boy, happiness is located for him in books, especially in story books. This is the case with an ordinary intelligent child; sometimes happiness is in other things, but we are taking an ordinary case. Now the story books engross all the love and affection of the boy. Now the toys, dollies and pollies lose their charms; story books take their place, and he finds them beautiful and attractive. But happiness travels on.

The schoolboy enters the college, and in college life, his happiness is found in something else, say, in scientific books or philosophical works or the like. He reads them for sometime, but his happiness has travelled from books to the longing of seeking honours in the university; his desire is to reach the residence of his happiness, the headquarters of his joy. The student comes out of the university with flying colours. He gets a lucrative post and the happiness of this young man is centred in money, in riches. Now the one dream of his life is to accumulate riches, to be rich. He wants to become a big man, to amass a large fortune. When he gets some wealth after working in the office for a few years, his happiness passes on into something else. What is that? Need that be told? It is woman.

Now the young man wants to have a wife, and for the sake of a wife, he is ready to spend away his riches. The mother’s skirt no longer gives him any happiness; the toys have no charm for him; the story-books are cast aside, and they are read only on those occasions when they are expected to give him some insight into the nature of that dream of his life—the woman. He is all a sacrifice for the sake of his wife. Hard-earned riches are cast to the winds for the sake of petty whims of what is now the headquarters of his happiness.

The young man lives for sometime with the woman, and lo! the happiness is sighted a little yonder. The pleasure he could derive from the thought of his wife in the beginning, he no longer gets now. Taking the case of an ordinary youth, an ordinary youth of India, the happiness of the youth now passes from the woman on to the coming child. Now a child becomes the dream of his life. He wants to have a child, an angel, a seraph, a cherub in his house. Rama knows not much of the state of affairs in this country; but in India, after marrying, people pray to God and yearn for a child. They do all that lies in their powers to seek the aid of doctors and to invoke the blessings of holy men; all that they can do they do in order to be blessed with a child.

In the expectation of the child, concentrates all the happiness of the youth. The child is the sixth stage in his travel of happiness, in the march of joy. The youth is then blessed with a child. His joy knows no bounds; he is full of spirits, he springs up to his feet; he is elated; he is, as it were, raised above the earth many feet; he does not walk, he swims in the air, so to speak. His soul is full of happiness when he gets a child. In the sixth stage, in the moon-faced child, the happiness of the grown-up youth has reached in a way its acme. The intensest happiness is when he sees the face of his child. The happiness of an ordinary man has reached its zenith. After that, the youth begins to decline in spirits, the child becomes a grown-up boy and the charm is lost. The happiness of this man will go on travelling from object to object, sometimes located in this thing, at other times residing in that thing. But the intensity of happiness in the objects with an ordinary man will be not so strong, as it is in the love of his own child.

Let us now examine whether happiness really dwells in objects like these—the mother’s skirt, dollies and pollies, books, riches, woman, child, or any object and anything of this world at all. Before proceeding further, let us liken the travelling happiness to the travelling Sun-light. Sunshine also travels from place to place. It is at one time shining over India, and at another time on Europe. It travels on. When shades of the evening fall, see how rapidly the Sunshine shifts away from place to place. It shines on eastern America and it travels on to its west. See how the Sunlight goes skipping on tiptoe, slipping on from land to land, and is then seen spreading its lustre on Japan and so on. The Sunshine travels on from place to place. But all these different places where the Sunshine is seen are not the source, the home of Sunshine. The home of Sunshine must be somewhere else; the home of Sunshine is the Sun. Similarly let us examine happiness which goes on travelling from object to object like the Sunshine. Whence does it proceed? Where is its real home? Let us look at the Sun of happiness, as it were.

O people of the world! listen, listen. This is a lesson worthy of being proclaimed from the house-tops, in all the crossings of big cities, in all the thoroughfares. This is a lesson worthy of being proclaimed at the top of the voice. If you want to realize an object, if you want to get anything, do not hunt after the shadow. Touch your own head. Go within you. Realize this and you will see that the stars are your handiwork, you will see that all the objects of love, all the bewitching and fascinating things are simply your own reflection or shadow. How unreasonable it is that—

For a cap and bells our lives we pay,
Bubbles we earn with a whole soul’s tasking.

There is a beautiful story about a woman in India. She lost her needle in her house. She was too poor to afford a light in her house, so she went out of the house and was searching it in the streets. A gentleman inquired from her what she was doing. She said that she was searching for her needle? The gentleman asked, "Where did you lose the needle?" She said, "In the house." He said, "How unreasonable it is to search in the street a thing which was lost in the house!" She said that she could not afford a light in the house and there was a lantern in the street. She could not hunt in the house, she had to do something, so she must hunt in the street. This is exactly the way with the people. You have the Heaven within you; and yet you are searching pleasures in the objects in the streets, searching that thing outside, outside in the objects of the senses. How strange!

Realize the Heaven within you, and all at once all the desires are fulfilled, all the misery and suffering is put an end to.

Lo! the trees of the wood are my next of kin.
And the rocks alive with what beats in me.
The clay is my flesh, and the fox my skin.
I am fierce with the gadfly and sweet with the bee.
The flower is naught but the bloom of my love.
And the waters run down in the tune I dream.
The Sun is my flower, up hung above.
I cannot die, though forever death
Weave back and fro in the warp of me.
I was never born, yet my births of breath
Are as many as waves on the sleepless sea.

To hear the full Audio Book In Woods of God Realization Vol 1, here is the link: [Archive.org]
https://archive.org/details/SwamiRamaTirtha-AudioBook-InWoodsOfGodRealizationVol1
Click on Chapter 1:  Happiness Within [on the window on the right] to hear Chapter 1

Posted by Raghunathan Srinivasan at 19:18