INSPIRATIONAL STORY: A GIFT FROM THE HEART 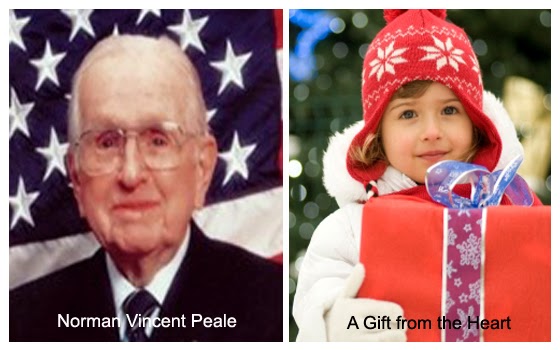 [This is another very poignant story which I read from the same book Norman Vincent Peale's A TREASURY OF COURAGE AND CONFIDENCE, on p.184, reprinted with permission from the Jan 1968 Readers Digest, originally from Guideposts, Dec 1967.]

A Gift from the Heart
Norman Vincent Peale

New York City, where I live, is impressive at any time, but as Christmas approaches, it's overwhelming. Store windows blaze with light and color, furs and jewels. Golden angels, 40 feet tall, hover over Fifth Avenue. Wealth, power, opulence-nothing in the world can match this fabulous display.

Through the gleaming canyons, people hurry to find last- minute gifts. Money seems to be no problem. If there's a problem, it's that the recipients so often have everything they need or want that it's hard to find anything suitable, anything that will really say, "I love you."

Last December, as Christ's birthday drew near, a stranger was faced with just that problem. She had come from Switzerland to live in an American home and perfect her English. In return, she was willing to act as secretary, mind the grandchildren, do anything that was asked. She was just a girl in her late teens. Her name was Ursula.
One of the tasks her employers gave Ursula was keeping track of Christmas presents as they arrived. There were many, and all would require acknowledgment.

Ursula kept a faithful record, but with a growing concern. She was grateful to her American friends; she wanted to show her gratitude by giving them a Christmas present. But nothing that she could buy with her small allowance could compare with the gifts she was recording daily. Besides, even without these gifts, it seemed that her employers already had everything.

At night, from her window, Ursula could see the snowy expanse of Central Park, and beyond it the jagged skyline of the city. Far below, in the restless streets, taxis hooted and traffic lights winked red and green. It was so different from the silent majesty of the Alps that at times she had to blink back tears of the homesickness she was careful never to show. It was in the solitude of her little room, a few days before Christmas, that a secret idea came to Ursula.

It was almost as if a voice spoke clearly, inside her head. "It's true," said the voice, "that many people in this city have much more than you do. But surely there are many who have far less. If you will think about this, you may find a solution to what's troubling you."

Ursula thought long and hard. Finally on her day off, which was Christmas Eve, she went to a great department store. She moved slowly along the crowded aisles, selecting and rejecting things in her mind. At last she bought some- thing, and had it wrapped in gaily colored paper. She went out into the gray twilight and looked helplessly around.

Finally, she went up to a doorman, resplendent in blue and gold. "Excuse me, please," she said in her hesitant English, "can you tell me where to find a poor street?"
"A poor street, miss?" said the puzzled man. "Yes, a very poor street. The poorest in the city." The doorman looked doubtful. "Well, you might try Harlem. Or down in the Village. Or the Lower East Side, maybe."

But these names meant nothing to Ursula. She thanked the doorman and walked along, threading her way through the stream of shoppers until she came to a tall policeman. "Please," she said, "can you direct me to a very poor street ... in Harlem?"
The policeman looked at her sharply and shook his head. "Harlem's no place for you, miss." And he blew his whistle and sent the traffic swirling past.

Holding her package carefully, Ursula walked on, head bowed against the sharp wind. If a street looked poorer than the one she was on, she took it. But none seemed like the slums she had heard about. Once she stopped a woman, "Please, where do the very poor people live?" But the woman gave her a hard stare and hurried on.

Darkness came sifting from the sky. Ursula was cold and discouraged and afraid of becoming lost. She came to an intersection and stood forlornly on the comer. What she was trying to do suddenly seemed foolish, impulsive, absurd. Then, through the traffic's roar, she heard the cheerful tinkle of a bell. On the comer opposite, a Salvation Army man was making his holiday traditional Christmas appeal.

At once Ursula felt better; The Salvation Army was a part of life in Switzerland, too. Surely this man could tell her what she wanted to know. She waited for the light, then crossed over to him. "Can you help me? I'm looking for a baby. I have here a little present for the poorest baby I can find." And she held up the package with the green ribbon and the gaily colored paper.

Dressed in gloves and overcoat a size too big for him, he seemed a very ordinary man. But behind his steel-rimmed glasses his eyes were kind. He looked at Ursula and stopped ringing his bell. "What sort of present?" he asked.
"A little dress. For a small, poor baby. Do you know of one?"
"Oh, yes," he said. "Of more than one, I'm afraid." "Is it far away? I could take a taxi maybe?"

The Salvation Army man wrinkled his forehead. Finally he said, "It's almost six o'clock. My relief will show up then. If you want to wait, and you can afford a dollar taxi ride, I'll take you to a family in my own neighborhood who needs just about everything."
"And they have a small baby?" "A very small baby."
"Then," said Ursula joyfully, "I wait!"

The substitute bell-ringer came. A cruising taxi slowed. In its welcome warmth, she told her new friend about herself, how she came to be in New York, what she was trying to do. He listened in silence, and the taxi driver listened too. When they reached their destination, the driver said, "Take your time, miss. I'll wait for you."

C)n the sidewalk, Ursula stared up at the forbidding tenement-dark, decaying, saturated with hopelessness. A gust of wind, iron-cold, stirred the refuse in the street and rattled the reeling ash cans. "They live on the third floor," the Salvation Army man said. "Shall we go up?"

But Ursula shook her head. "They would try to thank me, and this is not from me." She pressed the package into his hand. "Take it up for me, please. Say it's from ... from someone who has everything."

The taxi bore her swiftly from the dark streets to lighted ones, from misery to abundance. She tried to visualize the Salvation Army man climbing the stairs, the knock, the explanation, the package being opened, the dress on the baby. It was hard to do.

Arriving at the apartment on Fifth Avenue where she lived, she fumbled in her purse. But the driver flicked the flag up. "No charge, miss." "No charge?" echoed Ursula, bewildered. "Don't worry," the driver said. "I've been paid." He smiled at her and drove away.

Ursula was up early the next day. She set the table with special care. By the time she was finished, the family was awake, and there was all the excitement and laughter of Christmas morning. Soon the living room was a sea of gay discarded wrappings. Ursula thanked everyone for the presents she received.

"So you see," said Ursula, "I try to do kindness in your name. And this is my Christmas present to you."

How do I know all this? I know it because ours was the home where Ursula lived. Ours was the Christmas she shared. We were like many Americans, so richly blessed that to this child there seemed to be nothing she could add to all the material things we already had. And so she offered something of far greater value: a gift from the heart, an act of kindness carried out in our name.

Strange, isn't it? A shy Swiss girl, alone in a great impersonal city. You would think that nothing she could do would affect anyone. And yet, by trying to give away love, she brought the true spirit of Christmas into our lives, the spirit of selfless giving. That was Ursula's secret-and she shared it with us all.

Posted by Raghunathan Srinivasan at 21:45