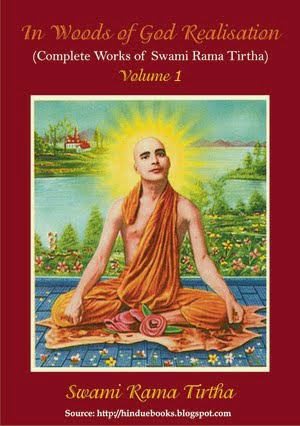 Described as “one of the greatest souls, not only of India, but of the whole world” by Mahatma Gandhi, Swami Rama Tirtha (1873-1906) was a living embodiment of the teachings of Advaita Vedanta.

Swami Rama Tirtha visited the United States from 1902-1904 and was one of the first great Swamis to bring the message of Vedanta to the U.S., Japan and Egypt, following in the footsteps of Vivekananda.


In Woods ofGod Realization is a complete collection of his writings and lectures. In this work, Swami Rama Tirtha presents a practical and inspiring view of Vedanta and also discusses various topics such as God-realization, Vedanta,Christianity and Islam, war and peace, and India's destiny.

Excerpts from The Secret of Success

My own Self in the form of students and teachers,

Does it not appear strange for a stranger from India to speak on a subject which is evidently more intelligently wielded by Japan than India? It may be. But Rama stands here before you as a teacher for reasons more than one.

To carry out skilfully an idea into practice is one thing, but to grasp its fundamental meaning is quite another. Even though a nation may be prospering by acting up to certain general principles today, there is every danger of its downfall if those principles are not distinctly supported by sound theory.

We read about a doctor who used to heal wounds by keeping the diseased part under linen bandage for a full week and touching it daily with a sword.
The wounds were healed, being kept from exposure by the bandage. But he ascribed the wonderful healing property to the touch of the sword. So thought his patients too.

This superstitious theory gave birth to failures upon failures in many cases that required some other treatment than mere bandaging. Hence it is absolutely necessary that right precept and right practice should go hand-in-hand. Rama regards Japan his country and her people as his countrymen. Rama can prove on reasonable grounds that in the beginning your ancestors migrated from India.

Your ancestors are Rama‟s ancestors. Rama comes to shake hands with you as your brother and not as a stranger. Rama has another ground which equally entitles him to this privilege. Rama is a Japanese from his very birth in regard to his temper, manners, habits and sympathies. With these forewords, let us come to the subject.

The secret of success is an open secret. Everybody has got something to say on the subject, and perhaps you often heard its general principles enunciated, but the vital importance of the subject justifies any amount of emphasis driving it home into the minds of the people.

At the outset let us put this question to Nature around us. All the "books in running brooks and sermons in stones" preach with unmistakable accent the gospel of continuous, incessant work. Light bestows upon us the power of sight. Light gives a mainspring to all beings.

Let us see what light is thrown on the question by light itself. Rama will take for illustration the ordinary light—the lamp. The underlying secret of a lamp‟s lustre and splendour is that it spares not its wick and oil. The wick and oil or the little self is being constantly consumed and glory is the natural consequence.

There it is, the lamp says, spare yourself and you will be immediately extinguished. If you seek ease and comfort for your bodies and waste your time in sensual pleasures and luxury, there is no hope for you. Inactivity, in other words, would bring death to you, and activity and activity alone is life.

Look at the stagnant pond and the running stream. The crystal water of the rustling river is ever fresh, clear, drinkable and attractive. But on the other hand see how disgusting, odorous, filthy, dirty, stinking and stenching is the water of the stagnant pond. If you wish to succeed, follow the line of action, the constant motion of a river. There is no hope for a man who would waste his wick and oil by preserving it from consumption.

Follow the policy of a river, ever progressing, ever assimilating, ever adapting itself to the environments and ever performing work, ever performing work is the first principle of success. From good to better daily, self surpassed. If you work on this principle, you will see that "It is as easy to be great as to be small."

Everybody loves white objects. Let us examine the cause of their being the objects of universal love. Let us account for the success of the white. The black objects are everywhere hated, discarded and rejected, and let us take this fact as it is and account for it.

Physics tells us the reality of the phenomenon of colour. Red is not red, green is not green; black is not black, and all is not what is seems. The red rose gets its lovely colour by reflecting or throwing back that colour. The other colours in the Sun‟s rays are entirely absorbed by the rose and nobody attributes those colours to the rose.

The green leaf absorbs all other colours in light and appears fresh and green by the very colour which it denies to itself and throws back. Black objects have the property of absorbing all colours and reflecting no light. They have no spirit of sacrifice in them and no charity. They do not renounce even a single ray. They do not throw back even an iota of what they receive.

Nature tells you that black, black like coal, shall he appear who refuses to give unto his neighbours what he receives. The way to receive it to give. The secret of appearing white is the total renunciation—to throw back instantaneously on your neighbours all that you receive. Acquire this virtue of white objects and you must be successful.

What does Rama mean by white? Europeans? Not Europeans alone, the white mirror, the white pearl, the white dove, the white snow, all the emblems of purity and righteousness stand as your great teachers. Imbibe, therefore, the spirit of sacrifice and reflect unto others all that you receive. Have no recourse to selfish absorption and you must be white.

A seed in order that it may bud forth into a tree must perish itself. Fruition is thus the final result of complete self-sacrifice. All teachers will bear Rama out in the statement that the more we impart the light of knowledge, the more we receive.
The Secret of Success [Poem] Swami Rama Tirtha: [Click Here]

Posted by Raghunathan Srinivasan at 15:57