PARABLES FROM NATURE: A LESSON OF FATIH 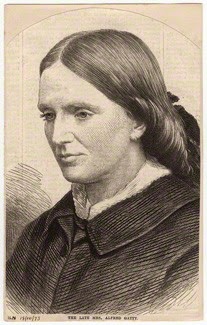 Margaret Gatty [1809 - 1873] was an English writer of children's literature. Gatty was born in Burnham on Crouch, Essex, the daughter of the Rev. Alexander John Scott, D.D., a Royal Navy chaplain, who served under, and was the trusted friend of, Lord Nelson. She married the Rev. Alfred Gatty in 1839 and moved into the vicarage of Church of St. Mary shortly after.

She became a highly useful and popular writer of tales for young people. Among her books may be mentioned Parables from Nature, Worlds not Realised, Proverbs Illustrated, and Aunt Judy's Tales. She also conducted Aunt Judy's Magazine, a family publication written by various members of Margaret's large family


A LESSON OF FAITH 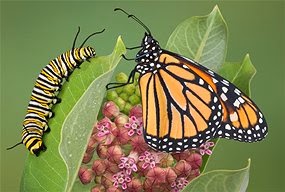 "If a man die, shall he live again? All the days of my appointed time will I wait, till my change come."–JOB xiv. 14.

"LET me hire you as a nurse for my poor children," said a Butterfly to a quiet Caterpillar, who was strolling along a cabbage-leaf in her odd lumbering way.

"See these little eggs," continued the Butterfly; "I don't know how long it will be before they come to life, and I feel very sick and poorly, and if I should die, who will take care of my baby butterflies when I am gone? Will you, kind, mild, green Caterpillar?

But you must mind what you give them to eat, Caterpillar!–they cannot, of course, live on your rough food. You must give them early dew, and honey from the flowers; and you must let them fly about only a little way at first; for, of course, one can't expect them to use their wings properly all at once.

Dear me! it is a sad pity you cannot fly yourself. But I have no time to look for another nurse now, so you will do your best, I hope. Dear! dear! I cannot think what made me come and lay my eggs on a cabbage-leaf! What a place for young butterflies to be born upon! Still you will be kind, will you not, to the poor little ones? Here, take this gold-dust from my wings as a reward. Oh, how dizzy I am! Caterpillar! you will remember about the food–"

And with these words the Butterfly closed her eyes and died; and the green Caterpillar who had not had the opportunity of even saying Yes or No to the request, was left standing alone by the side of the Butterfly's eggs.

"A pretty nurse she has chosen, indeed, poor lady!" exclaimed she, "and a pretty business I have in hand! Why, her senses must have left her, or she never would have asked a poor crawling creature like me to bring up her dainty little ones! Much they'll mind me, truly, when they feel the gay wings on their backs, and can fly away out of my sight whenever they choose! Ah! how silly some people are, in spite of their painted clothes and the gold-dust on their wings!"

However, the poor Butterfly was dead, and there lay the eggs on the cabbage-leaf; and the green Caterpillar had a kind heart, so she resolved to do her best. But she got no sleep that night, she was so very anxious. She made her back quite ache with walking all night long round her little charges, for fear any harm should happen to them; and in the morning says she to herself–

"Two heads are better than one. I will consult some wise animal upon the matter, and get advice. How should a poor crawling creature like me know what to do without asking my betters?"

But still there was a difficulty–whom should the Caterpillar consult? There was the shaggy Dog who sometimes came into the garden. But he was so rough!–he would most likely whisk all the eggs off the cabbage-leaf with one brush of his tail, if she called him near to talk to her, and then she should never forgive herself. There was the Tom Cat, to be sure, who would sometimes sit at the foot of the apple-tree, basking himself and warming his fur in the sunshine; but he was so selfish and indifferent!–there was no hope of his giving himself the trouble to think about butterflies' eggs.

"I wonder which is the wisest of all the animals I know," sighed the Caterpillar, in great distress; and then she thought, and thought, till at last she thought of the Lark; and she fancied that because he went up so high, and nobody knew where he went to, he must be very clever, and know a great deal; for to go up very high (which she could never do) was the Caterpillar's idea of perfect glory.

Now, in the neighbouring corn-field there lived a Lark, and the Caterpillar sent a message to him, to beg him to come and talk to her; and when he came she told him all her difficulties, and asked him what she was to do, to feed and rear the little creatures so different from herself.

"Perhaps you will be able to inquire and hear something about it next time you go up high," observed the Caterpillar timidly.

The Lark said, "Perhaps he should;" but he did not satisfy her curiosity any further. Soon afterwards, however, he went singing upwards into the bright, blue sky. By degrees his voice died away in the distance, till the green Caterpillar could not hear a sound. It is nothing to say she could not see him; for, poor thing! she never could see far at any time and had a difficulty in looking upwards at all, even when she reared herself up most carefully, which she did now; but it was of no use, so she dropped upon her legs again, and resumed her walk round the Butterfly's eggs, nibbling a bit of the cabbage-leaf now and then as she moved along.

"What a time the Lark has been gone!" she cried, at last. "I wonder where he is just now! I would give all my legs to know! He must have flown up higher than usual this time, I do think! How I should like to know where it is that he goes to, and what he hears in that curious blue sky! He always sings in going up and coming down, but he never lets any secret out. He is very, very close!"

And the green Caterpillar took another turn round the Butterfly's eggs.
At last the Lark's voice began to be heard again. The Caterpillar almost jumped for joy and it was not long before she saw her friend descend with hushed note to the cabbage bed.

"New, news, glorious news, friend Caterpillar!" sang the Lark; "but the worst of it is, you won't believe me!"

"I believe everything I am told," observed the Caterpillar hastily.

"Well, then, first of all, I will tell you what these little creatures are to eat"–and the Lark nodded his beak towards the eggs. "What do you think it is to be? Guess!"

"Dew, and the honey out of flowers, I am afraid," sighed the Caterpillar.

"No such thing, old lady! Something simpler than that. Something that you can get at quite easily."

"I can get at nothing quite easily but cabbage-leaves," murmured the Caterpillar, in distress.

"Excellent! my good friend," cried the Lark exultingly; "you have found it out. You are to feed them with cabbage-leaves."

"Never! " said the Caterpillar indignantly. "It was their dying mother's last request that I should do no such thing."

"Their dying mother knew nothing about the matter," persisted the Lark; "but why do you ask me, and then disbelieve what I say? You have neither faith nor trust."

"Oh, I believe everything I am told," said the Caterpillar.

"Nay, but you do not," replied the Lark; "you won't believe me even about the food, and yet that is but a beginning of what I have to tell you. Why, Caterpillar, what do you think those little eggs will turn out to be?"

"Butterflies, to be sure," said the Caterpillar.

"Caterpillars! " sang the Lark; "and you'll find it out in time;" and the Lark flew away, for he did not want to stay and contest the point with his friend.

"I thought the Lark had been wise and kind," observed the mild green Caterpillar, once more beginning to walk round the eggs, "but I find that he is foolish and saucy instead. Perhaps he went up too high this time. Ah, it's a pity when people who soar so high are silly and rude nevertheless! Dear! I still wonder whom he sees, and what he does up yonder."

"I would tell you, if you would believe me," sang the Lark, descending once more.

"I believe everything I am told," reiterated the Caterpillar, with as grave a face as if it were a fact.

"Then I'll tell you something else," cried the Lark; "for the best of my news remains behind. You will one day be a Butterfly yourself. "

"Wretched bird!" exclaimed the Caterpillar, "you jest with my inferiority–now you are cruel as well as foolish. Go away! I will ask your advice no more."

"I told you you would not believe me," cried the Lark, nettled in his turn.

"I believe everything that I am told," persisted the Caterpillar; "that is"–and she hesitated,–"everything that it is reasonable to believe. But to tell me that butterflies' eggs are caterpillars, and that caterpillars leave off crawling and get wings, and become butterflies!–Lark! you are too wise to believe such nonsense yourself, for you know it is impossible."

"I know no such thing," said the Lark, warmly. "Whether I hover over the corn-fields of earth, or go up into the depths of the sky, I see so many wonderful things, I know no reason why there should not be more. Oh, Caterpillar! it is because you crawl, because you never get beyond your cabbage-leaf, that you call any thing impossible."

"Nonsense!" shouted the Caterpillar. "I know what's possible, and what's not possible,according to my experience and capacity, as well as you do. Look at my long green bodyand these endless legs, and then talk to me about having wings and a painted feathery coat! Fool!–"

"And fool you! you would-be-wise Caterpillar!" cried the indignant lark. "Fool, to attempt to reason about what you cannot understand! Do you not hear how my song swells with rejoicing as I soar upwards to the mysterious wonder-world above? Oh, Caterpillar! what comes to you from thence, receive, as I do, upon trust."

"That is what you call–"
"Faith," interrupted the Lark.

At that moment she felt something at her side. She looked round–eight or ten little green caterpillars were moving about, and had already made a show of a hole in the cabbage-leaf. They had broken from the Butterfly's eggs!

Shame and amazement filled our green friend's heart, but joy soon followed; for, as the first wonder was possible, the second might be so too. "Teach me your lesson, Lark!" she would say; and the Lark sang to her of the wonders of the earth below, and of the heaven above. And the Caterpillar talked all the rest of her life to her relations of the time when she should be a Butterfly.

But none of them believed her. She nevertheless had learnt the Lark's lesson of faith, and when she was going into her chrysalis grave, she said–"I shall be a Butterfly some day!"
But her relations thought her head was wandering, and they said, "Poor thing!"

And when she was a Butterfly, and was going to die again, she said–"I have known many wonders–I have faith–I can trust even now for what shall come next!" 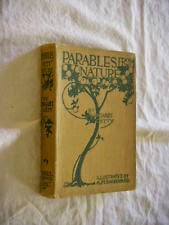 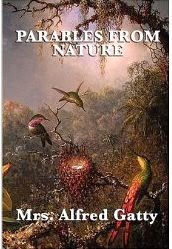 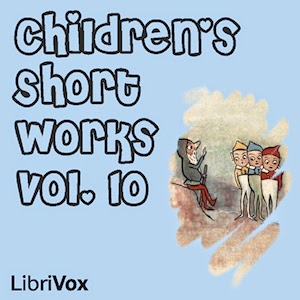 
Posted by Raghunathan Srinivasan at 06:00