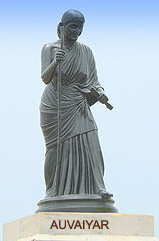 [Abithana Chintamani states that there were three female poets titled Auvaiyar. Among them, Avvaiyar I lived during the Sangam period and extolled the generosity of Paari and Athiyaman among her 59 poems in the Sangam literature.


Avvaiyar II lived during the period of Kambar and Ottakoothar during the reign of the Kulothunga Chola III. She wrote Aathichudi, Kondraivendan, Moodurai and Nalvazhi, that remain very popular even now and are inculcated in school textbooks in Tamil Nadu.

Auvaiyar III is said to have written Vinayakar Agaval of 72 lines in praise of Lord Ganapathy and Auvai KuraL, comprising 310 stanzas of theosophical aphorisms. ]


Study of literature helps us mould our character.  Themes such as valour and love, nobility of conduct and spirit of sacrifice, abound in Tamil literature. Moreover, classic poets have a brevity and forcefulness of expression, combined with a wealth of striking similes which make even didactic literature, works of real art and beauty.

By considering universally acceptable values in just one line Auvaiyar even excelled  Thiruvalluvar's brevity* and succeeded in making them stay in memory for the rest of one's life... She directed her moral instructions at children who have open minds and are very receptive.
The following quotes from Auvaiyar’s book Aathichoodi, illustrate the simplicity of her style and profoundness of her message:


*I cite below just two examples from Auvaiyar's Kondrai Vendan, with similar stanzas from Thiruvalluvar's Thirukkural, to illustrate the brevity and forcefulness of  expression of Auvaiyar:

Posted by Raghunathan Srinivasan at 20:54