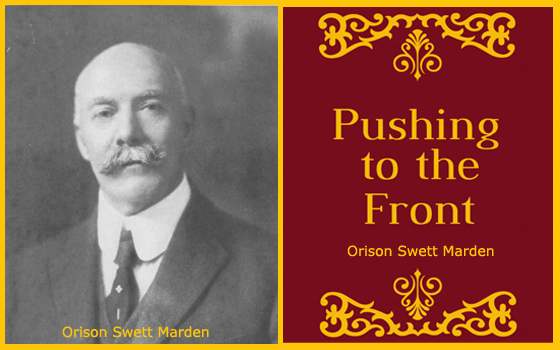 [I studied Orison Swett Marden's Inspirational Series in my 30's.  After 40 years, today I could download the book Pushing to the Front which was one of my favourites, from http://bookos.org/dl/747991/49c4a9.  I share with you now, the anecdote of Antonio Canova from pp 5-6.  The book is studded with many such gems.]

A large company had been invited to a banquet, and just before the hour, the confectioner, who had been making a large ornament for the table, sent word that he had spoiled the piece.

"If you will let me try, I think I can make something that will do," said a boy who had been employed as a scullion at the mansion of Signor Faliero, the host.

"You!" exclaimed the head servant, in astonishment: "and who are you?"
"I am Antonio Canova, the grandson of Pisano, the stone-cutter," replied the little fellow.

"And pray, what can you do?" asked the major domo.
"I can make you something that will do for the middle of the table, if you'll let me try."

The servant was at his wits end, so he told Antonio to go ahead and see what he could do. Calling for some butter, the scullion quickly molded a large crouching lion, which the admiring major-domo placed upon the table.

Dinner was announced, and many of the most noted merchants, princes, and noblemen of Venice were ushered into the dining-room Among them were skilled critics of art work When their eyes fell upon the butter lion, they forgot the purpose for which they had come in their wonder at such a work of genius.

They looked at the lion long and carefully, and asked Signor Faliero what great sculptor had been persuaded to waste his skill upon such a temporary material. Faliero could not tell; so he asked the head servant, who brought Antonio before the company.

When the distinguished guests learned that the lion had been made in a short time by a scullion, the dinner was turned into a feast in his honor. The rich host declared that he would pay the boy's expenses under the best masters, and he kept his word.

Antonio was not spoiled by his good fortune, but remained at heart the same simple, earnest, faithful boy who had tried so hard to become a good stone-cutter in the shop of Pisano. Some may not have heard how the boy Antonio took advantage of this first great opportunity; but all know of Canova, one of the greatest sculptors of all time.

Weak men wait for opportunities, strong men make them.  History furnishes thousands of examples of men who have seized occasions to accomplish results deemed impossible by those less resolute. Prompt decision and whole-hearted action sweep the world before them.

Are we going to be weak or strong? Surely, STRONG! So, let us not wait for extraordinary opportunities, but seize common occasions and make them great!

Posted by Raghunathan Srinivasan at 22:52