BROTHER LAWRENCE AND 'THE PRACTICE OF THE PRESENCE OF GOD' 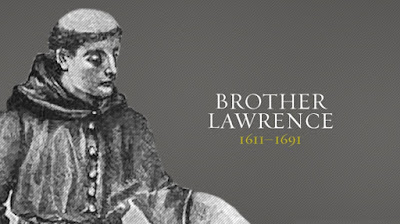 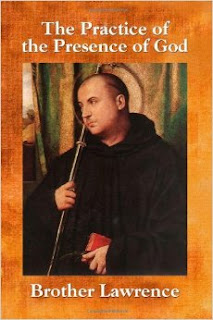 Brother Lawrence was born Nicolas Herman in 1611, in the village of Herimenil in Lorraine, France. His parents were peasants. So his schooling was limited at best.

As a young man, Nicholas fought in the Thirty Years War. But being captured by the Germans and accused of spying, then wounded by the Swedes in a later battle, he turned away from a soldier’s life.

Soon he was employed as a footman to M. William de Fieubet, treasurer of the King of France. Nicholas recalled of himself that “he was a clumsy fellow who used to break everything”. His time as a soldier and a footman totaled about 18 years.

Around the time he had entered the army, at age 18, he had experienced a spiritual awakening. One winter he saw a tree stripped of its leaves. He considered that soon afterwards, these leaves would reappear, followed by flowers and fruit. This gave him “a lofty awareness of the providence and power of God that never left him.”

Thus when his service as a footman ended, Nicholas sought spiritual fulfillment in the solitude of a hermit’s life. Soon realizing this wasn’t for him, in 1649 at age 38, he offered himself to the Order of “Barefooted” Carmelites in Paris. The Carmelites were one of the most austere monastic communities, and the barefooted Carmelites practiced even more severe self-denial. Nicholas was accepted into the order as a lay brother and was given the name Lawrence of the Resurrection.

Early on, Brother Lawrence was assigned kitchen duty, a work to which he had a natural aversion. But having decided to do everything for the love of God, he prayerfully went about his duties and for 15 years “found great ease in doing things” there. Later, Lawrence was given the task of cobbling shoes, likely because he was crippled in one leg. He enjoyed this work but said that he remained ready to leave the work for whatever task he was assigned. His only desire was to find joy in doing little things for the love of God.

By his own testimony, Brother Lawrence spent the last 40 years of his life in the practice of the presence of God—that is, in silent and intimate conversation with Him. A plain, blunt man with a rough exterior, unlearned and living in total obscurity, daily performing the most menial tasks, he became known and respected by high and low alike. His life was a shining example of holiness. He had a frank, open manner that inspired confidence and candor.

Many sought to learn the source of his Christlike spirit. They found his wisdom practical, unadorned, and to the point, yet profound and beautifully broad in viewpoint. His classic work, The Practice of the Presence of God, is actually a compilation of letters, conversations, and spirtual maxims, much of it recorded and preserved by those who knew him. He died in 1691, aged 80 years. 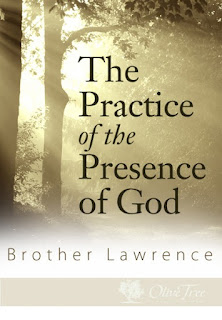 The Practice of thePresence of God is a book of collected teachings of Brother Lawrence compiled by Father Joseph de Beaufort.

The basic theme of the book is the development of an awareness of the presence of God.

The first conversation in the book recounts Brother Lawrence's conversion to Christianity when he was 18 years old.

The text attempts to explain Lawrence's method of acquiring the presence of God. A summary of his approach can be gleaned from the following passages.

"That he had always been governed by love, without selfish views; and that having resolved to make the love of GOD the end of all his actions, he had found reasons to be well satisfied with his method. That he was pleased when he could take up a straw from the ground for the love of GOD, seeking Him only, and nothing else, not even His gifts."[1] "That in order to form a habit of conversing with GOD continually, and referring all we do to Him; we must at first apply to Him with some diligence: but that after a little care we should find His love inwardly excite us to it without any difficulty."

For the Full Text of "The Practice of the Presence of God": [Click Here] 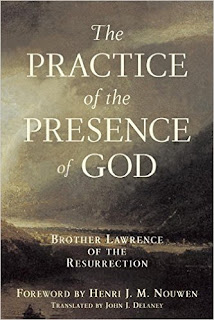 YouTubeAudio: The Praqctice of the Presence of God: Full Audio Book: [Click Here]

Email ThisBlogThis!Share to TwitterShare to FacebookShare to Pinterest
Labels: Spiritual/Scriptures