LEIGH HUNT: "ABOU BEN ADHEM" AND "THE PLATE OF GOLD"

He was the son of a clergyman from the West Indies. Like Lamb and Coleridge, he was educated at Christ’s Hospital in London. He began writing poetry while still a boy.

At the age of 24, he joined his brother in founding a weekly newspaper, the “Examiner.” During the thirteen years for which he contributed to this paper he exerted a wholesome influence in journalism, raising the tone of the press, showing great independence and tolerance, and fighting vigorously for liberal principles.

Hunt’s poetry is pretty, fanciful, and musical, but, with the exception of one or two pieces, is now little read. Among his familiar essays, there are many little masterpieces, suffused with his cheerful optimistic spirit, and expressed exquisitely.

“No man,” says James Russell Lowell, “has ever understood the delicacies and luxuries of language better than he; and his thoughts often have all the rounded grace and shifting luster of a dove’s neck…. He was as pure-minded a man as ever lived, and a critic whose subtlety of discrimination and whose soundness of judgment, supported as it was on a broad basis of truly liberal scholarship, have hardly yet won fitting appreciation.”

“Abou Ben Adhem” and the "The Plate of Gold" are among the best known of his works: 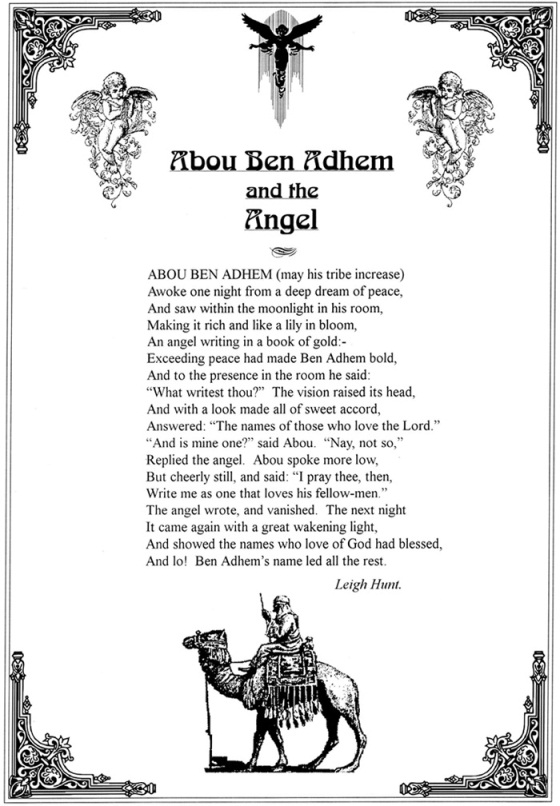 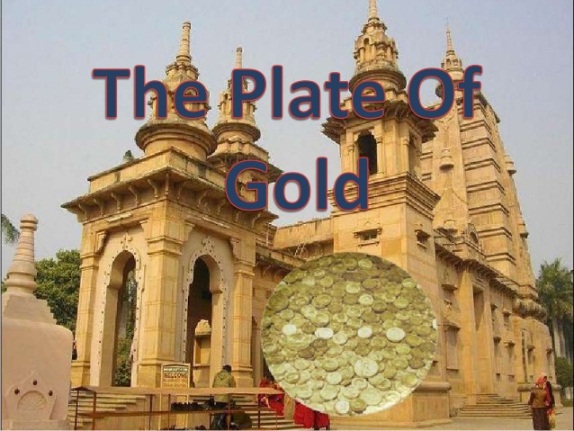 The Plate Of Gold

One day there fell in great Benares' temple-court
A wondrous plate of gold, whereon these words were writ;
'To him who loveth best, a gift from Heaven.'

Thereat
The priests made proclamation: 'At the midday hour, Each day, let those assemble who for virtue deem their right to Heaven's gift the best; and we will hear the deeds of mercy done, and so adjudge.' The news ran swift as light, and soon from every quarter came nobles and munshis, hermits, scholars, holy men, and all renowned for gracious or for splendid deeds, meanwhile the priests in solemn council sat and heard what each had done to merit best the gift of Heaven. So for a year the claimants came and went.
At last,
after a patient weighing of the worth of all,
the priests bestowed the plate of gold on one who seemed,
the largest lover of the race - whose whole estate,
within the year had been parted among the poor.
This man, all trembling with his joy, advanced to take
the golden plate-when lo! at his finger's first touch
it changed to basest lead! All stood aghast; but when
the hapless claimant dropt it clanging on the floor,
Heaven's guerdon was again transformed to shining gold.
So for another twelve month sat he priests and judged.
Thrice they awarded-thrice did Heaven refuse the gift.
Meanwhile a host of poor, maimed beggars in the street
lay all about the temple gate, in hope to move
that love whereby each claimant hoped to win the gift
and well for them it was (if gold be charity),
for every pilgrim to the temple gate praised God.
that love might thus approve itself before the test,
and so coins rained freely in the outstretched hands;
but none of those who gave, so much as turned to look
into the poor sad eyes of them that begged.
And now
The second year had almost passed, but still the plate
of gold, by whomsoever touched was turned to lead.
At length there came a simple peasant-not aware
of that strange contest for the gift of God-to pay
a vow within the temple. As he passed along
the line of shrivelled beggars, all his soul was moved
within him to sweet pity, and the tears well up
and trembled in his eyes.
Now by the temple gate
there lay a poor, sore creature, blind, and shunned by all;
but when the peasant came, and saw the sightless face
and trembling, maimed hands he could not pass, but knelt,
and took both palms in his, and softly said: 'O thou,
my brother! bear the trouble bravely. God is good.'
The he arose and walked straightway across the court,
and entered where they wrangled of their deeds of love
before the priests.
A while he listened sadly; then
had turned away; but something moved the priest who held
the plate of gold to beckon to the peasant. So
he came, not understanding and obeyed, and stretched
his hand and took the sacred vessel. Lo! it shone
with thrice its former lustre, and amazed them all!
'Son', cried the priest, 'rejoice, the gift of God is thine.
Thou lovest best!' And all made answer, 'It is well.'
And, one by one, departed. But the peasant knelt
and prayed, bowing his head above the golden plate;
while o'er his soul like morning streamed the love of God.