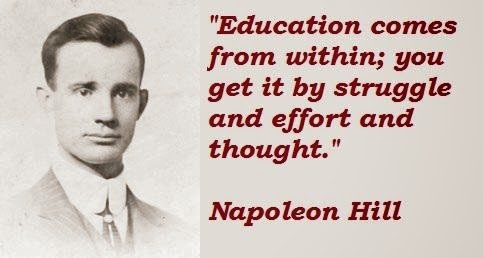 What is "education"? Dr. Napoleon Hill defines  it as "organized knowledge". In his masterpiece "The Law of Success", in first lesson "The Master Mind", we come across the true life story of an "uneducated millionaire?" complimenting the "junk man millionaire!", we saw earlier.

WHAT IS "EDUCATION"?  OR  “UNEDUCATED MILLIONAIRE?"
The president of a well known college inherited a large tract of very poor land. This land had no timber of commercial value, no minerals or other valuable appurtenances, therefore it was nothing but a source of expense to him, for he had to pay taxes on it.
The State built a highway through the land. An "uneducated[?]" man who was driving his automobile over this road observed that this poor land was on top of a mountain which commanded a wonderful view for many miles in all directions. He [the ignorant one] also observed that the land was covered with a growth of small pines and other saplings.
He bought fifty acres of the land for $10.00 an acre. Near the public highway he built a unique log house to which he attached a large dining room. Near the house he put in a gasoline filling station. He built a dozen single room log houses along the road, these he rented out to tourists at $3.00 a night, each. The dining room, gasoline filling station and log houses brought him a net income of $15,000.00 the first year.
The next year he extended his plan by adding fifty more log houses, of three rooms each, which he now rents out as summer country homes to people in a near-by city, at a rental of $150.00 each for the season. The building material cost him nothing, for it grew on his land in abundance (that same land which the college president believed to be worthless).
Moreover, the unique and unusual appearance of the log bungalows served as an advertisement of the plan, whereas many would have considered it a real calamity had they been compelled to build out of such crude materials.
Less than five miles from the location of these log houses this same man purchased an old worked-out farm of 150 acres, for $25.00 an acre, a price which the seller believed to be extremely high.
By building a dam, one hundred feet in length, the purchaser of this old farm turned a stream of water into a lake that covered fifteen acres of the land, stocked the lake with fish, then sold the farm off in building lots to people who wanted summering places around the lake. The total profit realized from this simple transaction was more than $25,000.00, and the time required for its consummation was one summer. Yet this man of vision and imagination was not "educated" in the orthodox meaning of that term.
Let us keep in mind the fact that it is through these simple illustrations of the use of organized knowledge that one may become educated and powerful.


In speaking of the transaction here related, the college president who sold the fifty acres of worthless (?) land for $500.00 said: "Just think of it! That man, whom most of us might call ignorant, mixed his ignorance with fifty acres of worthless land and made the combination yield more yearly than I earn from five years of application of so-called education." 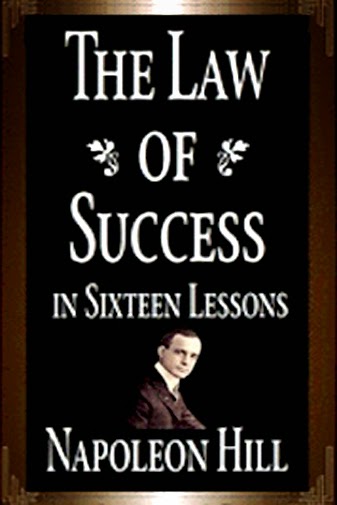