Having qualified as a doctor in 1912, Dr Edward Bach worked for several years in hospitals and was well aware of their negative effect on the human spirit. After leaving orthodox medicines and hospitals in 1930, he started his work with the flower remedies. By 1935, when he had discovered 38 remedies in all, Dr Bach declared the system complete. He had founded a radically new approach to healing that concentrated exclusively on the emotional states of individuals rather than their physical symptoms.

Dr Bach consistently spoke of the Flower Remedies, not as a personal achievement but as a gift from nature, and from God. This is Dr Bach's central message: we are all healers. Everyone can use the remedies. Everyone can heal and in the process understand who they are and take charge of their own destinies.

In "Heal Thyself" [1931], Dr Bach explains the real cause and cure of diseases. What follows is a summary of the book, in Dr Bach's own words.

Disease is in essence the result of conflict between Soul and Mind, and will never be eradicated except by spiritual and mental effort. Such efforts, if properly made with understanding, can cure and prevent disease by removing those basic factors which are its primary cause.

No effort directed to the body alone can do more than superficially repair damage, and in this there is no cure, since the cause is still operative and may at any moment again demonstrate its presence in another form. In fact, in many cases apparent recovery is harmful, since it hides from the patient the true cause of his trouble, and in the satisfaction of apparently renewed health the real factor, being unnoticed, may gain in strength.

There is one primary error which man can make, and that is action against Unity; this originates in self-love. So also we may say that there is but one primary affliction - discomfort, or disease.

For example, Pride, which is arrogance and rigidity of mind, will give rise to those diseases which produce rigidity and stiffness of the body. Pain is the result of cruelty, whereby the patient learns through personal suffering not to inflict it upon others, either from a physical or from a mental standpoint. The penalties of Hate are loneliness, violent uncontrollable temper, mental nerve storms and conditions of hysteria.

The diseases of neurosis, neurasthenia and similar conditions which rob life of so much enjoyment, are caused by excessive Self-love. Ignorance and lack of wisdom bring their own difficulties in everyday life, and in addition should there be a persistence in refusing to see truth when the opportunity has been given, short-sightedness and impairment of vision and hearing are the natural consequences.

Instability of mind must lead to the same quality in the body with those various disorders which affect movement and co-ordination. The result of greed and domination of others is such diseases as will render the sufferer a slave to his own body, with desires and ambitions curbed by the malady. 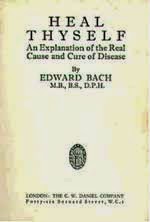