2013-23 Ella Wheeler Wilcox: Don't look for the flaws as you go through Life 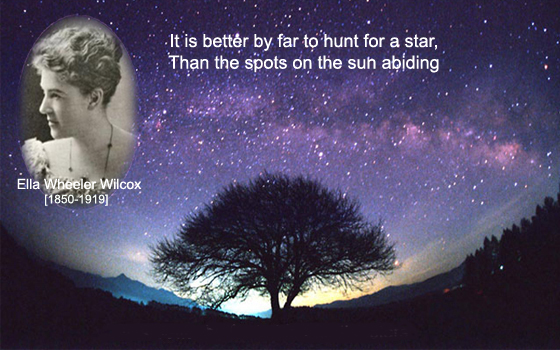 [ Ella Wheeler Wilcox (1850-1919), was one of the most popular poets in her time, her verse appearing in innumerable magazines, periodicals and books. She has probably been read by many more people than poets who have been considered her superiors. She wrote for the same reason that a bird sings. It was what she was made for. Her poetry was very popular, generally written in plain, rhyming verse. Her works include Poems of Passion(1883), Poems of Peace (1906), Poems of Experience (1910), and Poems (1919). Her best-known work was Poems of Passion. Her most popular poem was " Solitude", which contains the lines: "Laugh, and the worldlaughs with you; Weep, and you weep alone"."The art of being kind" was her religion, and she lived it every day of her life. The world is better because Ella Wheeler Wilcox lived.]

As You Go Through Life
by Ella Wheeler Wilcox

Don't look for the flaws as you go through life
And even when you find them,
It is wise and kind to be somewhat blind
And look for the virtues behind them.
For the cloudiest night has a hint of light
Somewhere in its shadows hiding;
It is better by far to hunt for a star,
Than the spots on the sun abiding.

The current of life runs ever away
To the bosom of God's great ocean.
Don't set your force 'gainst the river's course
And think to alter its motion.
Don't waste a curse on the universe --
Remember it lived before you.
Don't butt at the storm with your puny form,
But bend and let it go o'er you.

The world will never adjust itself
To suit your whims to the letter.
Some things must go wrong your whole life long,
And the sooner you know it the better.
It is folly to fight with the Infinite,
And go under at last in the wrestle;
The wiser man shapes into God's plan
As water shapes into a vessel.

Posted by Raghunathan Srinivasan at 15:39