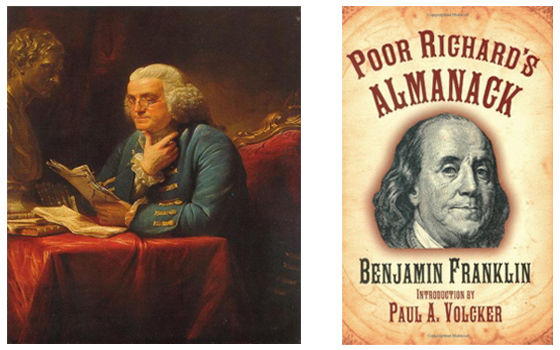 [ Benjamin Franklin rose from a 17-year-old runaway to  a successful printer, newspaperman, author, inventor, scientist, diplomat, and statesman. His great success came from living the virtues of frugality and industry, and his life offers us many invaluable lessons. Let’s dive right into one of the most popular samples of Benjamin Franklin's timeless wisdom, "The Way to Wealth" from his Poor Richard's Almanack.  Before that, please read his own introduction:

"In 1732 I first published my Almanac under the name of Richard Saunders; it was continued by me for about twenty-five years, and commonly called Poor Richard's Almanack. I endeavoured to make it both entertaining and useful, and it accordingly came to be in such demand, that I reaped considerable profit from it, vending annually near ten thousand.

And observing that it was generally read, (scarce any neigbbourhood in the province being without it,) I considered it as a proper vehicle for conveying instruction among the common people, who bought scarcely any other books. I therefore filled all the little spaces, that occurred between the remarkable days in the Calendar, with proverbial sentences, chiefly such as inculcated industry and frugality, as the means of procuring wealth, and thereby securing virtue; it being more difficult for a man in want to act always honestly, as (to use here one of those proverbs) It is hard for an empty sack to stand upright" ]

... I stopped my horse lately where a great number of people were collected at a venue of merchant goods. The hour of sale not being come, they were conversing on the badness of the times, and one of the company called to a plain clean old man, with white locks, "Pray, Father Abraham, what think you of the times? Won't these heavy taxes quite ruin the country? How shall we be ever able to pay them? What would you advise us to?"

Father Abraham stood up, and replied, "If you'd have my advice, I'll give it you in short, for a word to the wise is enough, and many words won't fill a bushel, as Poor Richard says." They joined in desiring him to speak his mind, and gathering round him, he proceeded as follows:

"Friends", says he, "and neighbors, the taxes are indeed very heavy, and if those laid on by the government were the only ones we had to pay, we might more easily discharge them; but we have many others, and much more grievous to some of us. We are taxed twice as much by our idleness, three times as much by our pride, and four times as much by our folly, and from these taxes the commissioners cannot ease or deliver us by allowing an abatement."

"However let us hearken to good advice, and something may be done for us; God helps them that help themselves, as Poor Richard says, in his almanac of 1733.
It would be thought a hard government that should tax its people one tenth part of their time, to be employed in its service."

"But idleness taxes many of us much more, if we reckon all that is spent in absolute sloth, or doing of nothing, with that which is spent in idle employments or amusements, that amount to nothing."

"If time be of all things the most precious,wasting time must be, as Poor Richard says, the greatest prodigality, since, as he elsewhere tells us, lost time is never found again, and what we call time-enough, always proves little enough: let us then be up and be doing, and doing to the purpose; so by diligence shall we do more with less perplexity."

"Sloth makes all things difficult, but industry all easy, as Poor Richard says; and he that riseth late, must trot all day, and shall scarce overtake his business at night. While laziness travels so slowly, that poverty soon overtakes him, as we read in Poor Richard, who adds, drive thy business, let not that drive thee; and early to bed, and early to rise, makes a man healthy, wealthy and wise."

"So what signifies wishing and hoping for better times. We may make these times better if we bestir ourselves. Industry need not wish, as Poor Richard says, and he that lives upon hope will die fasting. There are no gains, without pains, then help hands, for I have no lands, or if I have, they are smartly taxed."

"And, as Poor Richard likewise observes, he that hath a trade hath an estate, and he that hath a calling hath an office of profit and honor; but then the trade must be worked at, and the calling well followed, or neither the estate, nor the office, will enable us to pay our taxes."

"If we are industrious we shall never starve; for, as Poor Richard says, at the working man's house hunger looks in, but dares not enter. Nor will the bailiff nor the constable enter, for industry pays debts, while despair encreaseth them, says Poor Richard."

"What though you have found no treasure, nor has any rich relation left you a legacy, diligence is the mother of good luck, as Poor Richard says, and God gives all things to industry. Then plough deep, while sluggards sleep, and you shall have corn to sell and to keep, says Poor Dick."

"Work while it is called today, for you know not how much you may be hindered tomorrow, which makes Poor Richard say, one today is worth two tomorrows; and farther, have you somewhat to do tomorrow, do it today. If you were a servant, would you not be ashamed that a good master should catch you idle?"

"Are you then your own master, be ashamed to catch yourself idle, as Poor Dick says. When there is so much to be done for yourself, your family, your country, and your gracious king, be up by peep of day; let not the sun look down and say, inglorious here he lies."

"Handle your tools without mittens; remember that the cat in gloves catches no mice, as Poor Richard says. 'Tis true there is much to be done, and perhaps you are weak handed, but stick to it steadily, and you will see great effects, for constant dropping wears away stones, and by diligence and patience the mouse ate in two the cable; and little strokes fell great oaks, as Poor Richard says in his almanac, the year I cannot just now remember."

"Methinks I hear some of you say, must a man afford himself no leisure? I will tell thee, my friend, what Poor Richard says, employ thy time well if thou meanest to gain leisure; and, since thou art not sure of a minute, throw not away an hour."

"Leisure is time for doing something useful; this leisure the diligent man will obtain, but the lazy man never; so that, as Poor Richard says, a life of leisure and a life of laziness are two things. Do you imagine that sloth will afford you more comfort than labor?"

"No, for as Poor Richard says, trouble springs from idleness, and grievous toil from needless ease. Many without labor would live by their wits only, but they break for want of stock. Whereas industry gives comfort, and plenty, and respect: fly pleasures, and they'll follow you. The diligent spinner has a large shift, and now I have a sheep and a cow, everybody bids me good morrow, all which is well said by Poor Richard."

"If you would be wealthy, says he, in another almanac, think of saving as well as of getting: the Indies have not made Spain rich, because her outgoes are greater than her incomes. Away then with your expensive follies, and you will not have so much cause to complain of hard times, heavy taxes, and chargeable families; for, as Poor Dick says,
Women and wine, game and deceit,
Make the wealth small, and the wants great."

"And farther, what maintains one vice, would bring up two children. You may think perhaps that a little tea, or a little punch now and then, diet a little more costly, clothes a little finer, and a little entertainment now and then, can be no great Matter; but remember what Poor Richard says, many a little makes a mickle, and farther, beware of little expenses; a small leak will sink a great ship, and again, who dainties love, shall beggars prove, and moreover, fools make Feasts, and wise men eat them.

Get what you can, and what you get hold;
'Tis the stone that will turn all your lead into gold,

as Poor Richard says. And when you have got the philosopher's stone, sure you will no longer complain of bad times, or the difficulty of paying taxes."

"This doctrine, my friends, is reason and wisdom; but after all, do not depend too much upon your own industry, and frugality, and prudence, though excellent things, for they may all be blasted without the blessing of heaven; and therefore ask that blessing humbly, and be not uncharitable to those that at present seem to want it, but comfort and help them. Remember Job suffered, and was afterwards prosperous.

"And now to conclude, experience keeps a dear school, but fools will learn in no other, and scarce in that, for it is true, we may give advice, but we cannot give conduct, as Poor Richard says: however, remember this, they that won't be counseled, can't be helped, as Poor Richard says: and farther, that if you will not hear reason, she'll surely rap your knuckles."

Thus the old gentleman ended his harangue. The people heard it, and approved the doctrine, and immediately practiced the contrary, just as if it had been a common sermon; for the venue opened, and they began to buy extravagantly, notwithstanding all his cautions, and their own fear of taxes. I found the good man had thoroughly studied my almanacs, and digested all I had dropped on those topics during the course of five-and-twenty years.

The frequent mention he made of me must have tired any one else, but my vanity was wonderfully delighted with it, though I was conscious that not a tenth part of the wisdom was my own which he ascribed to me, but rather the gleanings I had made of the sense of all ages and nations.

However, I resolved to be the better for the echo of it; and though I had at first determined to buy stuff for a new coat, I went away resolved to wear my old one a little longer. Reader, if thou wilt do the same, thy profit will be as great as mine...