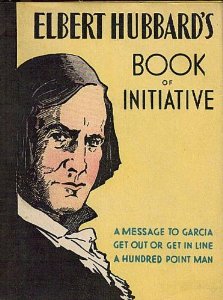 [Alice Hubbard writes in the Introduction to THE NOTEBOOK OF ELBERT HUBBARD -- 'Elbert Hubbard, the most positive human force of his time, was a man of genius in business, art, literature and philosophy.  He was like Emerson giving breath of life to truth, embalmed and  laid in pyramids of disuse.

From the thoughts of Moses, Solomon, Socrates, Pythagoras, Buddha, Jesus and Mohamed, he has brought to us wisdom that applies to the art of living today.'

The inspirational essay INIATIVE which follows, is taken fromElbert Hubbard's BOOK OF INITIATIVE, a collection of brief inspirational essays written in the white heat of inspired heart and mind.  Here he goes even one step ahead of A MESSAGE TO GARCIA.]
The world bestows its big prizes, both in money and honors, for but one thing. And that is Initiative. What is Initiative? I'll tell you: It is doing the right thing without being told.

But next to doing the thing without being told is to do it when you are told once. That is to say, carry the Message to Garcia: those who can carry a message get high honors, but their pay is not always in proportion.

Next, there are those who never do a thing until they are told twice: such get no honors and small pay.

Next, there are those who do the right thing only when Necessity kicks them from behind, and these get indifference instead of honors, and a pittance for pay. This kind spends most of its time polishing a bench with a hard-luck story.

Then, still lower down in the scale than this, we have the fellow who will not do the right thing even when some one goes along to show him how and stays to see that he does it: he is always out of a job, and receives the contempt he deserves, unless he happens to have a rich Pa, in which case Destiny patiently awaits around the corner with a stuffed club.

To which class do you belong?

Elbert Hubbard: A Message to Garcia - A Lesson on Initiative [Click Here]

Posted by Raghunathan Srinivasan at 21:51