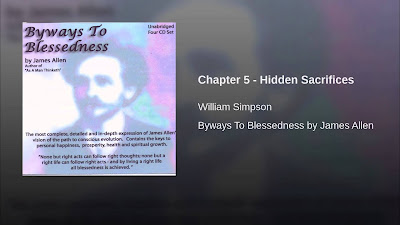 A man must be willing to humbly sacrifice his selfish habits and practices because they are untrue and unworthy, and for the happiness of those about him, without expecting any reward or looking for any good to accrue to himself; nay, he must be prepared to lose for himself, to forfeit pleasure and happiness, even life itself, if by so doing he can make the world more beautiful and happy.

All true sacrifice is within; it is spiritual and hidden, and is prompted by deep humility of heart. Nothing but the sacrifice of self can avail, and to this must all men come sooner or later during their spiritual evolution. But in what does this selfabnegation consist? How is it practised? Where is it sought and found? It consists in overcoming the daily proneness to selfish thoughts and acts; it is practised in our common intercourse with others; and it is found in the hour of tumult and temptation.

There are hidden sacrifices of the heart which are infinitely blessed both to him that makes them and those for whom they are made, albeit their making costs much effort and some pain. Men are anxious to do some great thing, to perform some great sacrifice which lies beyond the necessities of their experience, while all the time, perhaps, they are neglecting the one thing needful, are blind to that sacrifice which by its very nearness is rendered imperative.

If you are given to anger or unkindness offer it up. These hard, cruel, and wrong conditions of mind never brought you any good; they can never bring you anything but unrest, misery, and spiritual blindness. Nor can they ever bring to others anything but unhappiness.

Offer up all unkindness, all anger. “It takes two to make a quarrel;” don’t be the “other one.” If one is angry or unkind to you try to find out where you have acted wrongly; and, whether you have acted wrongly or not, do not throw back the angry word or unkind act. Remain silent, self-contained, and kindly disposed; and learn, by continual effort in right-doing, to have compassion upon the wrongdoer.

Give up your impatience. Overcome it there where it is wont to assert itself. Resolve that you will yield no longer to its tyrannical sway but will conquer it and cast it out. It is not worth keeping a single hour, nor would it dominate you for another moment if you were not labouring under the delusion that the follies and perversities of others render impatience on your part necessary.

There is no blessedness anywhere until impatience is sacrificed; and its sacrifice means the development of endurance, the practice of forbearance, and the creation of a new and gentler habit of mind. When impatience and irritability are entirely put away, are finally offered up on the altar of unselfishness, then is realised and enjoyed the blessedness of a strong, quiet, and peaceful mind.

Then there are little selfish indulgences, some of which appear harmless, and are commonly fostered; but no selfish indulgence can be harmless, and men and women do not know what they lose by repeatedly and habitually succumbing to effeminate and selfish gratifications. If the God in man is to rise strong and triumphant, the beast in man must perish.

Sacrifice your cherished and coveted indulgence; fix your mind on something higher, nobler, and more enduring than ephemeral pleasure; live superior to the craving for sense-excitement, and you will live neither vainly nor uncertainly.

Then there is the sacrifice of greed and all greedy thoughts. The willingness that others should possess rather than we; the not-coveting of things for ourselves but rejoicing that they are possessed and enjoyed by others, that they bring happiness to others; the ceasing to claim one’s “own”, and the giving up to others, unselfishly and without malice, that which they exact.

Another hidden sacrifice, one of great spiritual beauty and of powerful efficacy in the healing of human sorrows, is the sacrifice of hatred - the giving up of all bitter thoughts against others, of all malice, dislike, and resentment. Bitter thoughts and blessedness cannot dwell together. Hatred is a fierce fire that scorches up, in the heart of him who harbours it, all the sweet flowers of peace and happiness, and makes a hell of every place where it comes.

Sacrifice all hatred, slay it upon the holy altar of of devotion - devotion to others. Think no more of any injury to your own petty self, but see to it that henceforth you injure and wound no other. Open the flood gates of your heart for the inpouring of that sweet, great, beautiful love which embraces all with strong yet tender thoughts of protection and peace, leaving not one, nay, not even he who hates or despises or slanders you, out in the cold.

Then there is the hidden sacrifice of impure desires, of weak self-pity and degrading self-praise, of vanity and pride, for these are unblest attitudes of mind, deformities of heart. He who makes them, one by one, gradually subduing and overcoming them, will, according to the measure of his success, rise above weakness and suffering and sorrow, and will comprehend and enjoy the perfect and imperishable blessedness.

He who each day accomplishes some victory over himself, who subdues and puts behind him some unkind thought, some impure desire, some tendency to sin, is everyday growing stronger, purer, and wiser, and every dawn finds him nearer to that final glory of Truth which each self-sacrificing act reveals in part.

Look not outside thee nor beyond thee for the light and blessedness of Truth, but look within; thou wilt find it within the narrow sphere of thy duty, even in the humble and hidden sacrifices of thine own heart.

For the Full text of 'Byways of Blessedness' by James Allen: [Click Here] 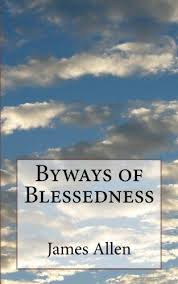