(This appeared in the Reader's Digest, May 1955. What a  story and what a compliment!)

As we learned a few hours later, the boy fell overboard a little after 7 a.m. No one saw him fall. He had been  clearing a scupper and lost his balance.  When he hit the water he fought against the wild surge and suck along the vessel's hull. The propeller missed him by inches. As the choking water eased its tug, he broke the surface and  saw the blue sky  overhead.

For a moment a feeling of relief relaxed him. The Mate must  have seen him fall and he would be picked up quickly. But the vessel kept going at full speed, and he threshed the water in panic, trying to overcome  her. 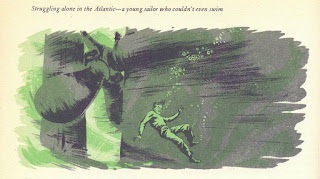 Suddenly he remembered something the Captain had said one day after a boat drill: "If you ever get in a tight spot, keep your head.  If you panic, you'll lose it sure's this vessel's got a keel.  You'll run round and round like a chicken with its head chopped off. So keep you head, and think!"

The boy steadied the paddling of  hands and feet and thought: I didn't know I could swim but I'm not sinking.  I'm swimming!   He managed to kick off his heavy pants and boots. He realized then that he was paddling as he had seen dogs do at his farm home in Maine.

But the vessel kept going away. He could now barely see her funnel and masts when he was heaved up on a high wave.   He looked anxiously around.  He did not know for what.  There was nothing to see but the water and empty sky. A breaking wave slapped him in the face, choking him. Salt burned his eyes.

The sailors were at breakfast when they missed the boy.  "Where is he?"  one asked.  Another remarked:  "Funny. He never called the watch. I'd better go look for him."  He searched through the forecastles, the lavatories. His footsteps quickened as his anxiety increased; his voice became querulous, now demanding. "You'd better tell the Old Man," someone suggested.

The Captain was talking to the Third Mate on the bridge. His vessel was on a safe course, 100 miles eastward of Jacksonville  and steaming at full speed in the Gulf Stream. The Captain was making up time lost at sailing. He turned to the sailor who raced up a ladder, shouting: "Sir!  The boy. We can't find him! We've looked everywhere. He's lost!"--and he waved a hand out over the sea.

The Captain summoned the Chief Mate from the dining room. The boy had been on his watch.
The Chief recalled that he had order the boy to clear the starboard scupper. What time?  It was after the boy brought coffee to the bridge--say about 7:10.

The Captain glanced at his watch.  8:21.  An hour and 11 minutes, 18 miles astern. Quick orders were issued. Some fuel oil was pumped onto the sea. The vessel held her course for a few seconds, until the oil had laid a path behind her. When that was well defined, the vessel reversed her course and steamed back along the oil path exactly the way she had come.  "We have to go back 20 miles from here," the Captain said.  "One hour and 20 minutes. Watch the time!"

The boy kept paddling slowly, facing in the direction of the vanished ship.  He was weakening and he wanted to cry.  He would have cried but the Captain was before him on the deck again addressing the men:  "The Sea's a hard life. Emergencies pop up, in storms in fogs, and you can't go running to the Five and Ten for a piece of  string or a box of nails to fix things. You've got to use your head.  Remember, more men get lost by losing their heads than for any other reason!"

It was all right for the Captain  to say that, he thought. He had never fallen overboard.  Or had he?  He had been at sea a long time; he must have experienced everything that could happen to a man.  He tried to think of himself as the Captain, and he began to say the things the Captain had said, over and over again as if addressing a group of men in the water around him. Then a series of broken waves washed over him, half-drowning him, and he struggled in a smother of foam and fear.

The Captain did not expect to find the boy   Cross winds and currents cause drift, and a head is such a small object to spot  in a vast area of roughened water. Men panic and drown so quickly. What chance had a boy who, he had been told, could not swim?

He glanced at his watch. A few more minutes to go.  "Pass the word we're nearly there," he said to the Third Mate.  "Reduce speed to slow.:  His head swung continuously from side to side, his eyes sweeping the sea, pausing, moving on.

"Suddenly he shouted: "Stop the engines! Full astern!  Stand by to get the boat away!"  He had seen the tiny head, bobbing up, sinking down, not more than 100 yards away.

The boy saw the vessel stop, saw the lifeboat come toward him. Just as his ebbing strength seemed exhausted, strong hands grabbed him. They yanked him over the gunwale and laid him on blankets.

The boy looked at the faces of the men at the oars.  One shouted: "Swimmin'!" The sea's for sailing boats, not swimmin'!"   Another said: "You're going to get hell, m'lad. The Old Man's sore. Three hours and you've got to go swimmin'!"

He knew they were teasing him. He wanted to nod, to smile, to let them know he understood; but nausea gripped him and he retched with pain.": Cut out the chatter,"  the Second Mate said;  "We've got to get him back. Hurry!"

Half of the story was gleaned later, from the boy; half of it was known to me from the beginning for, you see, I was the Captain.

When the vessel  was back on course I went down to see the boy.  Wrapped in blankets he look much younger than his 17 years.  Tears came to his eyes and he murmured: "Sir, I'm sorry if I've made you late."

I reassured him as best I could, and prescribed some rest.

On the day before our arrival at Boston, I asked him:  "You couldn't swim and you were in the water over two and a half hours. How did you ever managed to keep afloat?"

"Yes, sir. You told me to use my head. You tell everyone that, sir. And I knew you would come back."

"How the devil did you know that?"  I asked.

He glanced up and said quietly,  "Because you are like that, sir.":

Because you are like that!  The boy didn't know it but, with his words, he bestowed on  me a reward greater than any gift of government  or kings.