MAGIC SPELL OF A BOOK: JOHN RUSKIN'S UNTO THIS LAST 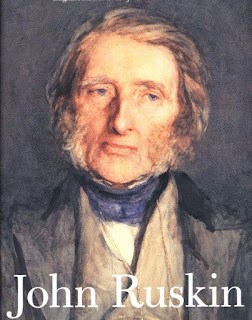 John Ruskin (1819-1900) was among the most influential thinkers and activists of the Victorian age. He was a poet and writer, an artist and prominent art critic, a teacher and social philosopher. At the age of three, Ruskin was reading the Bible every morning with his mother and committing passages to memory. He published his first poem at the age of eleven and his first prose at the age of fifteen.


In 1843 he published the first volume of Modern Painters (1843-1860, five volumes), for which he gained critical acclaim. The next major work was The Seven Lamps of Architecture (1849), which explored the Gothic styles of the Middle Ages. He followed up with The Stones of Venice (1951-1953, three volumes), and in these he argued that industrialization and the capitalist economy had reduced the working man to a mere cog in the machine.

"And the great cry that rises from all our manufacturing cities, louder than their furnace blast, is all in very deed for this - that we manufacture everything there except men; we blanch cotton, and strengthen steel, and refine sugar, and shape pottery; but to brighten, to strengthen, to refine, or to form a single living spirit, never enters into our estimate of advantages." [Stones of Venice Vol.II, 1853]

John Ruskin subsequently became an enthusiastic and devoted teacher, lecturing at the Working Men's College in London between 1854 and later at Oxford. He eventually served as the first Slade Professor of Fine Art at Oxford University (1870-1885).

Over the years, he had traveled broadly and witnessed extensive social injustices. Industrialization was taking hold and profit motivation was becoming more and more evident in the world. Ruskin was determined to hold individual people and moral values above the money motivated forward march of industrial progress.


"There is no wealth but life. Life, including all its powers of love, of joy, and of admiration. That country is the richest which nourishes the greatest number of noble and happy human beings; that man is richest who, having perfected the functions of his own life to the utmost, has also the widest helpful influence, both personal, and by means of his possessions, over the lives of others." [Unto This Last, 1862] 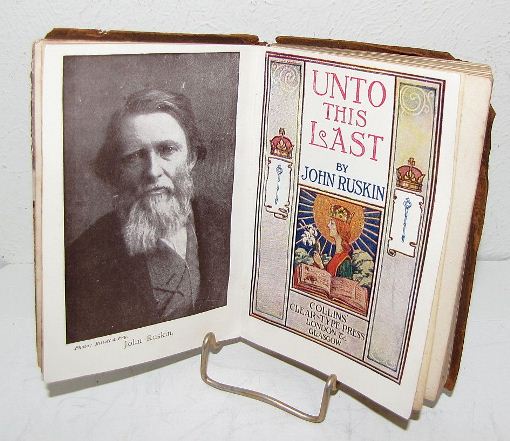 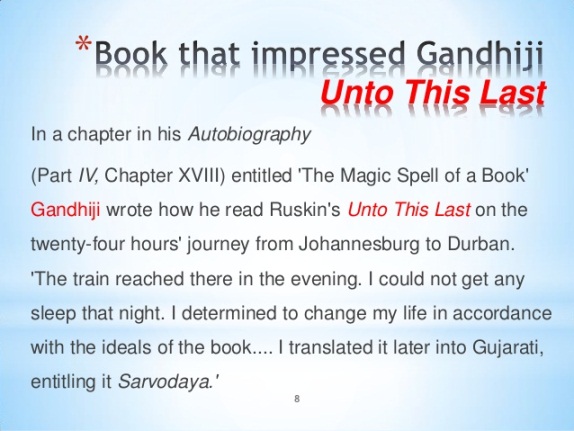 Sarvodaya is here re-translated into English [by V.G.Desai], Ruskin's winged words being retained as far as possible. At the end of that chapter Gandhiji gives us a summary of the teachings of Unto This Last as he understood it:

1. The good of the individual is contained in the good of all.

2. A lawyer's work has the same value as the barber's, as all have the same right of earning their livelihood from their work.

3. A life of labour, i.e. the life of the tiller of the soil and the handicraftsman is the life worth living.

Gandhiji's conclusion, [written before 1915], is prophetic and fit to be treasured by India for all time to come. And the last paragraph of the booklet is a pearl beyond price. [See below]

"Swaraj is not enough to make a nation happy. What would be the result of Swaraj being conferred on a band of robbers? They would be happy only if they were placed under the control of a good man who was not a robber himself. The United States, England and France for instance are powerful States, but there is no reason to think that they are really happy.

Swaraj really means self-control. Only he is capable of self-control who observes the rules of morality, does not cheat or give up truth, and does his duty to his parents, wife and children, servants and neighbours. Such a man is in enjoyment of Swaraj, no matter where he lives. A State enjoys Swaraj if it can boast of a large number of such good citizens.

Western civilization is a mere baby, a hundred or only fifty years old. And yet it has reduced Europe to a sorry plight. Let us pray that India is saved from the fate that has overtaken Europe, where the nations are poised for an attack on one another, and are silent only because of the stockpiling of armaments. Some day there will be an explosion, and then Europe will be a veritable hell on earth.

Non-white races are looked upon as legitimate prey by every European State. What else can we expect where covetousness is the ruling passion in the breasts of men? Europeans pounce upon new territories like crows upon a piece of meat. I am inclined to think that this is due to their mass-production factories.

India must indeed have Swaraj but she must have it by righteous methods. Swaraj cannot be attained by either violence or industrialization. India was once a golden land, because Indians then had hearts of gold. The land is still the same but it is a desert because we are corrupt. It can become a land of gold again only if the base metal of our present national character is transmuted into gold. The philosopher's stone which can effect this transformation is a little word of two syllables – Satya (Truth). If every Indian sticks to truth, Swaraj will come to us of its own accord."

Ruskin's UNTO THIS LAST  A Paraphrase by M.K.Gandhi: [Click Here] 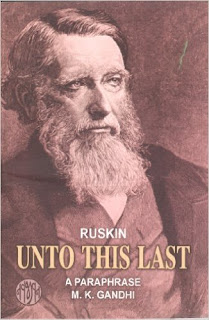