Hail to Dr. Samuel Hahnemann, M.D., the Founder of Homeopathy and one of the greatest benefactors of mankind !  The b'day of this great man falls on 10th April.

The expansion of these ideas is Hahnemann's masterpiece --


In his "Essay on a New Principle for ascertaining the curative powers of Drugs" [1796], Hahnemann had merely shown the external framework or the cornerstone of his convictions.  In his "Medicine of Experience" [1805] he had carried out his investigations further. But in his "Organon of Rational Healing" [1810], he brought all this to completion. This was the most important work of his life.

In the "Introduction" of the book, he set his newly discovered rules of healing over the traditional treatments, and accompanied his axioms with numerous examples:

So far, diseases of man were not healed in a rational way or according to fixed principles, but rather according to very varied curative purposes, amongst others, according to the palliative rule: contraria contrariis curentur.

In contrast to this lay the truth, the real way of healing, which I am pointing out in this volume : In order to cure gently, quickly and lastingly, choose in every case of illness a remedy which can itself arouse a similar malady to that which it is to cure [similia similibus curentur] !

Hitherto nobody has taught this homeopathic method of healing. But if it is Truth who is prescribing this method, then even if She has been disregarded for thousands of years, it is to be expected that traces of Her Immortal influence can be discovered in all epochs. And so it is.

Hahnemann then relates with the help of his great scholarship, how and by whom the principles of homoeopathy have been applied in former times. He goes back to Hippocrates [460 BC to 377 BC] and his school.

From the book "The Localities of Mankind" which he ascribes to a student of Hippocrates, he quotes the sentences : "Illness arises by similar things and by similar things can the sick be made well ; vomiting can be made to cease by means of emetics".

Following on this Greek example, Hahnemann describes other French and English doctors who have " felt the truth of the homoeopathic manner of healing and given expression to it." Of these expressions he says in a footnote :

I do not bring forward the following passages from authors, who had a presentiment of homoeopathy, as proofs in support of this doctrine, which is firmly established by its own intrinsic merits, but in order to avoid the imputation of having suppressed these fore-shadowings with a view of claiming for myself the priority of the idea. [" Organon," 6th edition, p. 90]

It is evident, that Hahnemann was always anxious to do justice to the truth. He did not wish to incur the reproach of pretending to be the first and only discoverer of his method of healing. He laid special emphasis on the fact : "Till now nobody has taught this homoeopathic way of healing, nobody has carried it out."

For truth is co-eternal with the all-wise, benevolent Deity. It may long escape the observation of man, until the time foreordained by Providence arrives, when its rays shall irresistibly break through the clouds of prejudice and usher in the dawn of a day, which shall shine with a bright and inextinguishable light for the weal of the human race. 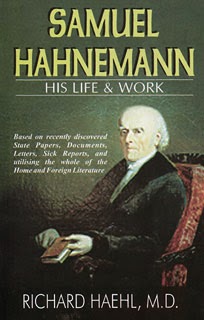