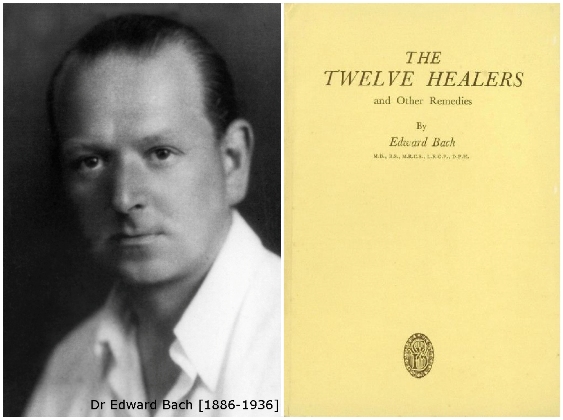 DrEdward Bach graduated from the University College Hospital, London in 1912 at the age of 26. He was employed as a House Surgeon there; he also set up a consulting room in Harley Street and had a busy practice.  The busier he was the more dissatisfied he became with the treatment through orthodox medicine. He could not accept the way doctors concentrated on diseases and not on the patients who suffered from them.

In 1919 took up the position of pathologist and bacteriologist at London Homeopathic Hospital.  There he came to know about Dr Samuel Hahnemann’s pioneering work and studied his masterpiece, The Organon. Bach was struck by the great similarity between Hahnemann’s ideas and his own – treat the patient; not the disease. He developed a set of seven bacterial nosodes or vaccines which became famous as the Seven Bach Nosodes.

Dr Bach had been working with bacteria, but he continued to search for simpler and purer methods of healing. He began collecting wild flowers  in the hope of replacing the nosodes with a series of gentler remedies. After identifying 38 basic negative states of mind and spending several years exploring the countryside, he managed to discover a flower based remedy for each negative state of mind. Dr Bach passed away peacefully on 27th Nov 1936, his mission completed.

Here are ten popular flower remedies [other than the five in the Rescue Remedy]:

Posted by Raghunathan Srinivasan at 10:46