LEO TOLSTOY - WHERE LOVE IS, GOD IS 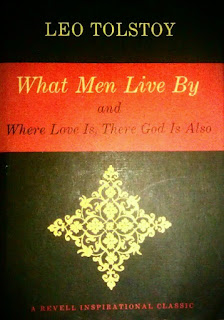 [Count Leo Tolstoy (1828 – 1910) was a great literary artist, moral thinker and social reformer. His ideas on nonviolent resistance, expressed in such works as The Kingdom of God Is Within You, had a profound impact on such pivotal twentieth-century figures as Mahatma Gandhi and Martin Luther King Jr. His literal interpretation of the ethical teachings of Jesus, centered on the Sermon on the Mount, has benefited millions of children as well as adults.
We shall see here one of his most popular stories, "Where Love Is, God Is". It epitomizes the central teaching of the Holy Bible. It also exemplifies the theme of "Learning-Living" namely being good, doing good, loving, giving and forgiving. To save space, I present below only excerpts from the story and direct interested readers to read the full story from THE 23 TALES pp.109-121]


In a certain town, there lived a cobbler, Martin by name. He was well known and never short of work, for he worked well, used good material, did not charge too much, and could be relied on. Martin had always been a good man; but in his old age he began to think more about his soul and to draw nearer to God.

His wife had died; and when his only surviving son also died, Martin gave way to despair. He reproached God for having taken the son he loved and stopped going to church. One day a holy man called on Martin and advised him thus: 'God gives you life, and you must live for Him. Study the Gospels; you have it all there. When you have learnt to live for Him, you will grieve no more, and all will seem easy to you.'

These words sank deep into Martin's heart, and that same day he went and bought himself a Testament in large print, and began to read.  At first he meant only to read on holidays, but having once begun he found it made his heart so light that he read every day. And the more he read the more clearly he understood what God required of him, and how he might live for God.

It happened once that Martin sat up late, absorbed in his book. He was reading Luke's Gospel; and in the sixth chapter he came upon the verses: 'To him that smiteth thee on the one cheek offer also the other; and from him that taketh away thy cloke withhold not thy coat also. Give to every man that asketh thee; and of him that taketh away thy goods ask them not again. And as ye would that men should do to you, do ye also to them likewise.'

He also read the verses where our Lord says: 'And why call ye me, Lord, Lord, and do not the things which I say? Whosoever cometh to me, and heareth my sayings, and doeth them, I will shew you to whom he is like: He is like a man which built an house, and digged deep, and laid the foundation on a rock: and when the flood arose, the stream beat vehemently upon that house, and could not shake it: for it was founded upon a rock. But he that heareth and doeth not, is like a man that without a foundation built an house upon the earth, against which the stream did beat vehemently, and immediately it fell; and the ruin of that house was great.'

When Martin read these words his soul was glad within him. He pondered over what he had read. He tried his own life by the standard of those words, asking himself: 'Is my house built on the rock, or on sand? If it stands on the rock, it is well. It brings such joy. Help me, O Lord!' He thought of all this, and he fell asleep.  'Martin!' he suddenly heard a voice, as if some one had breathed the word above his ear. 'Martin, Martin! Look out into the street to-morrow, for I shall come.'

Next morning he rose before daylight, and after saying his prayers and sat down by the window to his work, looking out into the street more than he worked, and whenever any one passed in unfamiliar boots he would stoop and look up.

Presently an old man named Stepanitch came near the window spade in hand.  The man was old and broken down, and had evidently not enough strength even to clear away the snow. 'What if I called him in and gave him some tea?' thought Martin. 'Come in,' he said, 'and warm yourself a bit. I'm sure you must be cold.'  'May God bless you!' said Stepánitch after the tea. 'Thank you, Martin, he said, 'you have given me food and comfort both for soul and body.' Stepánitch went away; and Martin sat down to his work. And as he stitched he kept looking out of the window, waiting for Christ, and thinking about him and his doings.

Then a woman came up. Martin glanced up at her through the window, and saw that she was a stranger, poorly dressed, and with a baby in her arms. Martin rose and called to her.'Why do you stand out there with the baby in the cold? Come inside. You can wrap him up better in a warm place. Come this way!'  'Sit down and eat, my dear, and I'll mind the baby. The woman began to eat, while Martin put the baby on the bed and sat down by it. The baby grew quiet and then began to laugh. And Martin felt quite pleased.

Then the woman came and took the child, and Martin got up. 'The Lord bless you, friend. Surely Christ must have sent me to your window, else the child would have frozen. Surely it must have been Christ who made you look out of your window and take pity on me, poor wretch!' And he told the woman his dream, and how he had heard the Lord's voice promising to visit him that day. 'Who knows? All things are possible,' said the woman.

After a while Martin saw an apple-woman stop just in front of his window. She had a large basket, but there did not seem to be many apples left in it. Just then, a ragged boy ran up, snatched an apple out of the basket, and tried to slip away.  But the old woman caught the boy by his sleeve. The boy screamed and the old woman scolded. Martin rushed out of the door and separated them. He took the boy by the hand and said, 'Let him go, Granny. Forgive him for Christ's sake.'

The old woman let go, and the boy wished to run away, but Martin stopped him. 'Ask the Granny's forgiveness!' said he. 'And don't do it another time. I saw you take the apple.' The boy began to cry and to beg pardon.' As the old woman was about to hoist her sack on her back, the lad sprang forward to her, saying, 'Let me carry it for you, Granny. I'm going that way.' Martin stood and watched them as they went along talking to each other.

Presently Martin noticed the lamplighter passing on his way to light the street lamps.
'Seems it's time to light up,' thought he. So he trimmed his lamp. Then he gathered his tools together, swept up the cuttings, put away the bristles and the thread and the awls, and, taking down the lamp, placed it on the table. Then he took the Gospel from the shelf. As Martin opened it, he seemed to hear footsteps, as though some one were moving behind him. Martin turned round, and a voice whispered in his ear: 'Martin, Martin, don't you know me?'

And Martin's soul grew glad. He crossed himself, put on his spectacles, and began reading the Gospel just where it had opened; and at the top of the page he read: 'I was an hungry, and ye gave me meat: I was thirsty, and ye gave me drink: I was a stranger, and ye took me in.'  And at the bottom of the page he read: 'Inasmuch as ye did it unto one of these my brethren even these least, ye did it unto me'(Matt. xxv). And Martin understood that his dream had come true; and that the Saviour had really come to him that day, and he had welcomed him.

Posted by Raghunathan Srinivasan at 16:13